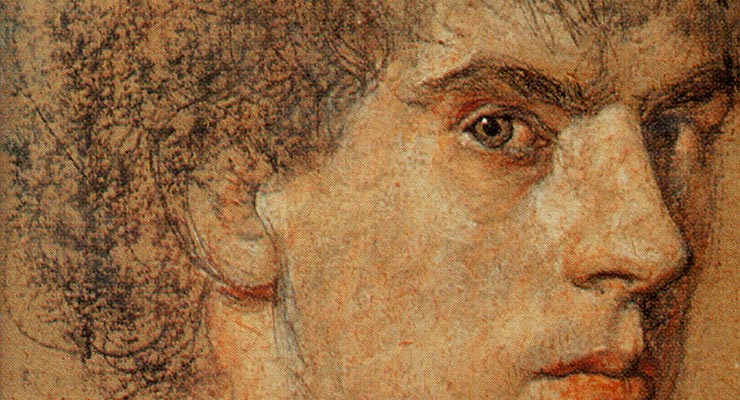 Austin Osman Spare, a British outsider artist who died in the 1950s, was also the grandfather of Chaos Magick. Here’s more about his bizarre and often disturbing life.

Austin Osman Spare (1886—1956) was an English artist—and practicing occultist. He was also the inventor of many of the techniques that would later be dubbed chaos magick.

Born in the Elephant & Castle area of South London to a policeman, Spare spent his early years next to an open-air meat market; the constant exposure to the banality of death deeply colored his development as an artist. Austin Osman Spare’s early work was similar to Aubrey Beardsley, then in vogue as England’s “decadent” years drew to a close, and it was on the strength of his Beardsley-esque line drawings that Spare won an art school scholarship, a real chance to improve his life and lift himself up out of the poverty and squalor he had been born into.

At art school, Spare worked constantly, and also studied deeply in the nascent field of psychoanalysis and, fashionably, into the occult, delving into books by Madame Blavatsky and Cornelius Agrippa’s Three Books of Occult Philosophy,

a foundational text on Western magick. Austin Osman Spare would claim that as a pre-pubescent he had been sexually initiated into a hereditary occult lineage by “Mrs. Patterson,” an octogenarian witch that almost certainly never existed outside of Spare’s imagination.

Spare’s hard work paid off, and by his early twenties he was on his way to meteoric success in the art world, and was declared a wunderkind by the press. Unfortunately, his timing was off: he made a name for himself just as England was losing its fascination with all things Victorian. The Beardsleyeque, decadent aesthetic quickly became as unfashionable as bellbottoms and long hair were in the 1980s, and Spare was tossed out by the changing of the guard.

Austin Osman Spare would return to South London, inhabiting a basement and continuing to paint unceasingly—a true outsider both to the art world and, indeed, to English society itself. Magick and the occult, explored through the medium of painting, would now become his singular pursuit. But Spare would go his own way even in the already socially-divergent world of the occult. An early member of Aleister Crowley’s A.’.A.’. (one of his illustrations is reproduced in the second issue of Crowley’s monumental occult journal The Equinox

), Austin Osman Spare quickly became disillusioned with the formal approach to magick that had been codified by the Hermetic Order of the Golden Dawn and its alumni.

“Others praise ceremonial Magic,” he famously quipped in The Book of Pleasure

, “and are supposed to suffer much Ecstasy! Our asylums are over-crowded, the stage is over-run! Is it by symbolizing we become the symbolized? Were I to crown myself King, should I be King? Rather should I be an object of disgust or pity. These Magicians, whose insincerity is their safety, are but the unemployed dandies of the Brothels.” 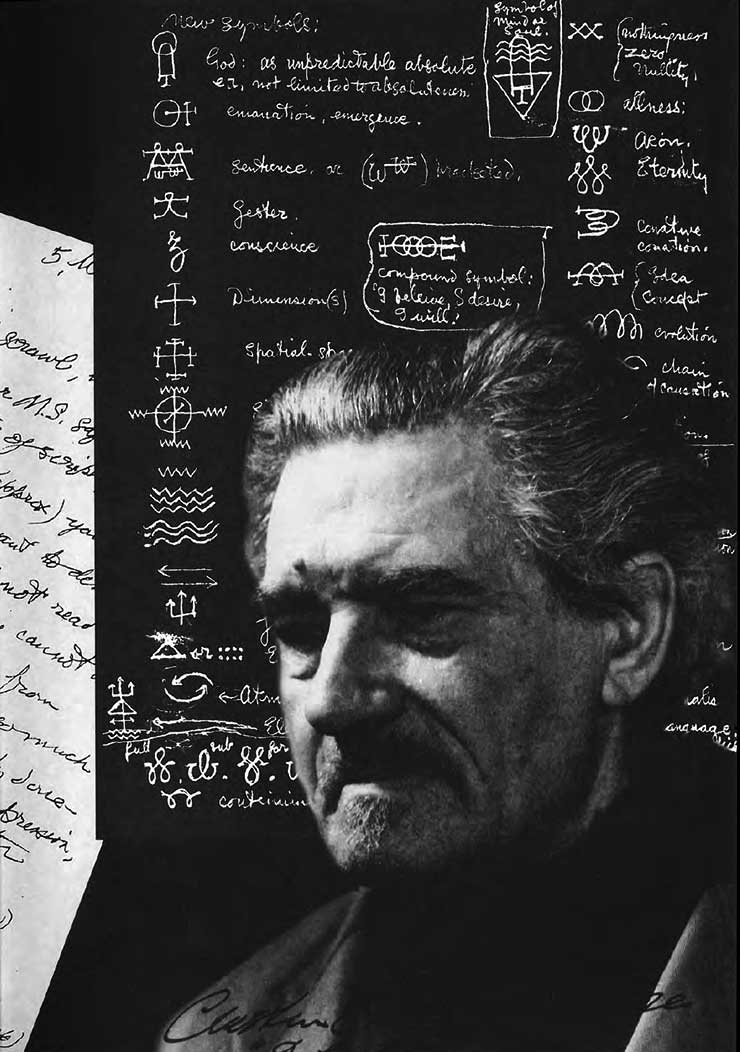 Crowley, however, remembered Austin Osman Spare fondly—the two were likely lovers for a time, as memorialized by Crowley in his poem “The Twins,” in which he compares himself and Spare to the incestuous gods Horus and Set, respectively:

See, how subtly I writhe!
Strange runes and unknown sigils
I trace in the trance that thrills us.
Death ! how lithe, how blithe
Are these male incestuous vigils!
Ah! this is the spasm that kills us!

Wherefore I solemnly affirm
This twofold Oneness at the term.
Asar on Asi did beget
Horus twin brother unto Set.
Now Set and Horus kiss, to call
The Soul of the Unnatural
Forth from the dusk; then nature slain
Lets the Beyond be born again.

After their split, however, Crowley would have different words for Austin Osman Spare, dubbing him a “Black Brother,” Crowley’s term for a magician who refuses to surrender their ego at the peak of their development, and thereafter becomes corrupted by it.

The rest of Austin Osman Spare’s life was spent in abject poverty, collecting cats that he usually spent his money feeding instead of himself, and drawing portraits of South Londoners in pubs for beer money. It was during this time that he would develop his deeply personal and unique system of magick, revolving around the use of “sigils” to unlock the buried abilities of the unconscious mind, and communion with otherworldly forces through the trance medium of painting itself. Spare also claimed to regularly seek to shock his unconscious mind into trances of occult power by engaging in sex with exceedingly ugly or aged women (possibly another Spare exaggeration).

Austin Osman Spare likely would have been completely forgotten were it not for Kenneth Grant, an over-enthusiastic young man who had grown up on H. P. Lovecraft books, who never shook the conviction that Lovecraft was writing codified non-fiction, and who soon undertook a lifelong pursuit of Magick. Like Israel Regardie before him, Grant came into Crowley’s orbit, becoming his secretary in the final years of his life; Crowley obliged the young man by demonstrating occult processes like ether-assisted astral travel.

(Letters preserved by Grant from the time, touchingly, show that the Old Beast was largely concerned with trying to assure that Grant properly looked after himself, dressed well and comported himself as a gentleman, so that Grant could get by and get a job in post-war London. He even wrote to Grant’s father pleading him to talk sense into the young man, as the “monstrous” Aleister felt that Grant’s obsession with him and Magick might well distract Grant from actually building a life and career for himself.)

After Crowley’s death, Grant floundered, convinced his occult training had been cut short; it was almost a decade later, through the Atlantis Bookshop, that Grant was introduced to Spare; Grant felt he had met the true guru that would complete his education. The aged Austin Osman Spare quickly became friendly with Kenneth Grant and his wife Steffi, who adored him, and Grant would work unceasingly to draw out and record Spare’s theories, including the sigil technique, which became the foundation of chaos magick in the 1970s (it is not coincidental, perhaps, that the last three letters of Chaos—AOS—are Austin Osman Spare’s initials and monogram). 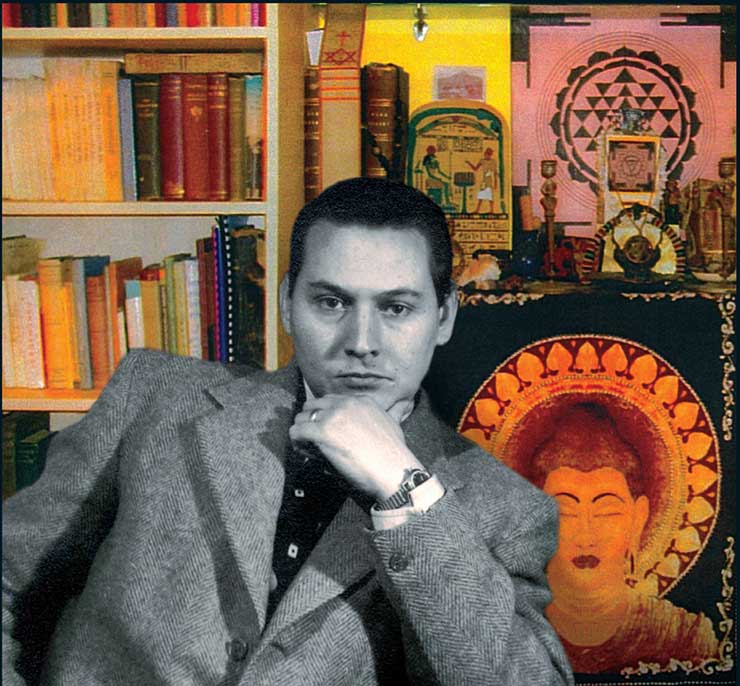 A young Kenneth Grant, pondering all matters Transyuggothian and praeterhuman. (Via Starfire)

While Grant did preserve Austin Osman Spare’s work and place in history, he also, unfortunately, mixed-up and confused Spare’s work with ideas and terms extrapolated from both Crowley and Lovecraft—as Grant would later demonstrate in his books, he seemed to think all three men were transmitting from one source, and therefore could be studied interchangeably. Biographer Phil Baker’s recent book Austin Osman Spare: The Occult Life of London’s Legendary Artist shows how much of Spare’s writing that Grant “discovered” was, in fact, just written by Grant himself. (It seems likely that Spare thought Grant was making him appear more intellectual and mysterious than he felt himself to actually be.)

Though the sigil technique has spread wide, the rest of Spare’s work remains inscrutable even within occult circles, where he is often name-dropped, but almost never directly engaged with, let alone understood. Spare was truly downwardly mobile—he holds far more in common with the aghoris, the graveyard-dwelling, filth-eating sadhus of India, than the romantic image of the imperious, glamorous, “all-powerful” Western magician. Additionally, his writing is oblique and his paintings are scarce (where’s the coffee table book?). That often makes Spare an unattractive and difficult subject of study at best. Nevertheless, his legendary status within the occult subculture—particularly in the United Kingdom, where he occupies a kind of “top dog” status in the English occult imagination—only grows as time goes on, and the reality of the man himself, perhaps, fades into history.

Luckily, we have Baker’s book, as well as the recent film The Bones Go Last, to thank for casting a clearer light on Austin Osman Spare. The Bones Go Last is reproduced in full below, kindly made available by the filmmakers on their Vimeo page.