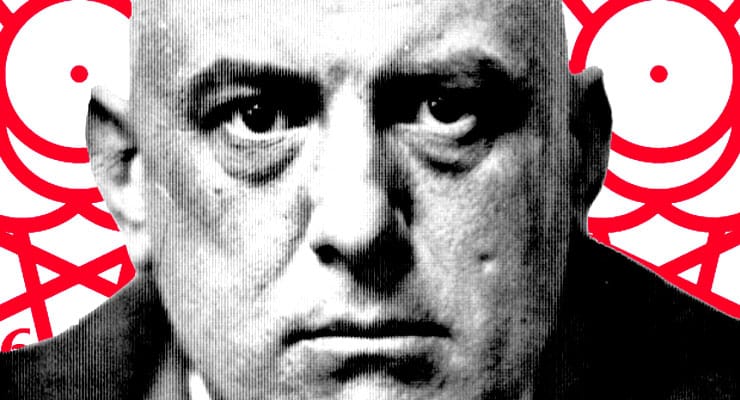 “It’s Crowley, Rhymes With Holy”: Aleister Crowley is remembered as a symbol of occultism, Satanism and even evil. But who was the man behind the symbol—and was he a victim of his own manipulation of the press?

Aleister Crowley was born on this day on October 12, 1875 in Leamington Spa, England, with his Sun in Libra, Moon in Pisces and Leo Ascendant.

Crowley took it as his life’s work to return an understanding of Magick to a society that had buried it. Like many others of his generation, he helped kick down the locked doors of repression, both sexual and spiritual, and sought to put the study of the “otherworlds” on a firm scientific basis.

Aleister Crowley was one of the first Westerners to openly talk about and advocate yoga, meditation, ritual, shamanism, the chakras, understanding of past lives, sexual and chemical experimentation, Qabalah, Buddhism, Hinduism and even Tantra as valid tools for self-exploration.

For Crowley (also an early advocate for gay rights), all of these could be used as structures to achieve one thing: the discovery, and execution, of one’s true life purpose. Unlike the Theosophists who came before him and the New Agers who came after him, he ruthlessly sought to cut out any fluffy, wishful and deluded thinking and instead posited Magick as the study of the true nature of the world, which, being natural, is neither black nor white but, rather, red in tooth and claw.

Crowley was also a “drug fiend,” as he described himself; he was prescribed heroin by a doctor and became a lifelong addict, which he made no bones about, recording his stories of withdrawal in painful detail for the public to see right alongside his records of sublime spiritual attainment. In this way he was honest, a rare trait among those who declare themselves “spiritual,” who so often pretend to be perfect paragons of virtue and hide their shadows—forgetting that the shadow, too, is divine.

Stories of his alleged cruelty to students are largely refracted funhouse images projected by the tabloids of his day who loved to pillory him (imagine today’s click-hungry journalists writing ham-fisted articles like “This One Man Performs Unspeakable Rites”), or the work of his early hostile biographer John Symonds. His later years were hard and plagued with unhinged students who could not measure up to his immense intellect or understand his highly cultivated, eccentric aristocratic British wit, wanted him to be Daddy and flipped out when he refused. Yet he died not in squalor as is so often reported but in a comfortable old folks’ home, surviving the War, with supportive students and friends near him, with dues funds for his Order safely secured under his bed even though he could have spent them on junk.

Crowley was a complex and misunderstood trickster genius whose work and intelligence tower above the so-called New Age movement and its petty, fairy-tale views of existence. Those who attack him only react to the PR image he so masterfully constructed by playing the press, and show how afraid they are of their own Shadow. Watch out for adults who believe in the Boogey Man. They are one step away from religious-sanctioned violence.

Seventy years after his death, Aleister Crowley remains one of the most controversial people in the world, whose name is enough to automatically trigger deep responses in people. Everybody seems to have an opinion on him: for the religious or conspiracy-minded he is a symbol of “the Devil.” New Agers, psychics and the esoterically-bent see him as much the same, immediately distancing themselves from the “bad” or “egoic” Crowley, thereby hoping to gain respectability for themselves by using him as a scapegoat. But, as I have said to many, if you kick the man who taped his own “Kick Me” sign to his back, what have you done but fallen for another of his jokes and shown the stripes of your insecure ego? In saying “Crowley is bad!” what one says is “I am good and right and better!” but, where is your proof?  And what, exactly, are you measuring by?

Aleister Crowley’s message was to achieve your own spiritual destiny instead of bowing to false idols, ideals, religions or other tools of human slavery. He made himself a symbol of horror, addiction, degradation and generally awful behavior so that those to come after him would follow their own destiny instead of his. “Follow yourself, not me, you assholes!” You can spot who got the joke and who didn’t in an instant.

Crowley approached spirituality as a scientist, not a saint, and subjected the claims of the world’s esoteric tradition to brutal scientific rigor. He left us a body of incredibly useful and potent techniques that can be used by Adults… not by children who want reality defined for them by others or who still want rules to follow. In the end, Crowley is just, as Alejandro Jodorowsky said, “A man dead.” He died long ago, and yet the shadowplay projection he threw on the wall of our sleepy cave is still here, still showing us that we are children who are scared of the dark.

Aleister Crowley did incredible things and he did horrible things. Now he is dead, and we have inherited the world that he prophesied. Now, in the Aeon of the Child, we all stand as terrible and immature infants with the electronic power of gods, running wild in a world of nuclear chaos. Even Crowley cowered in terror when he was shown what the world would become, after two world wars, the splitting of the atom and the breaking of all social codes: Us, that most awful and vicious Beast of all.

Attached below is the 70s jam SCARLET WOMAN by the band Chakra, with lyrics by Tantric scholar Mike Magee and background chanting by none other than Kenneth Grant(!)