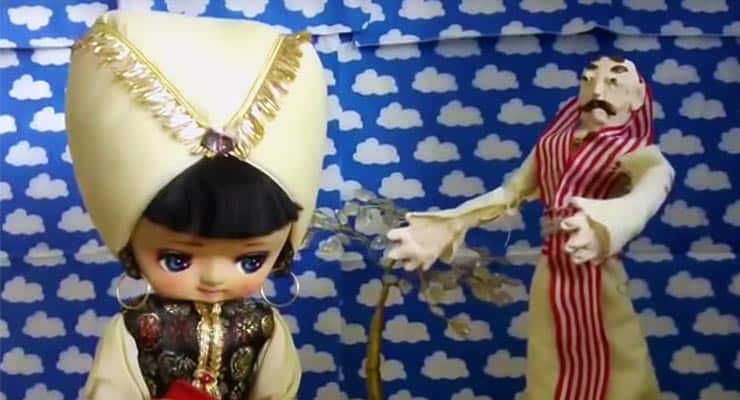 The history of the Hermetic Order of the Golden Dawn, one of the most revered magical groups in history… as dramatized with clay puppets

The short film below was premiered at the Atlantis Bookshop in London, the store near the British Museum that has been pre-eminently responsible for the modern occult revival. It dramatizes the history of the Hermetic Order of the Golden Dawn, the magical order that counted among its members such movers and shakers as W. B. Yeats, Florence Farr, Arthur Machen, Algernon Blackwood and Aleister Crowley, from which we inherit the modern synthesis of past techniques generally called Western Magick.

The Hermetic Order of the Golden Dawn (Latin: Ordo Hermeticus Aurorae Aureae; or, more commonly, The Golden Dawn (Aurora Aureae)) was an organization devoted to the study and practice of the occult, metaphysics, and paranormal activities during the late 19th and early 20th centuries. Known as a magical order, the Hermetic Order of the Golden Dawn was active in Great Britain and focused its practices on theurgy and spiritual development. Many present-day concepts of ritual and magic that are at the centre of contemporary traditions, such as Wicca[1][2] and Thelema, were inspired by the Golden Dawn, which became one of the largest single influences on 20th-century Western occultism.

The three founders, William Robert Woodman, William Wynn Westcott, and Samuel Liddell MacGregor Mathers, were Freemasons and members of Societas Rosicruciana in Anglia (S.R.I.A.). Westcott appears to have been the initial driving force behind the establishment of the Golden Dawn.

The Golden Dawn system was based on hierarchy and initiation like the Masonic Lodges; however women were admitted on an equal basis with men. The “Golden Dawn” was the first of three Orders, although all three are often collectively referred to as the “Golden Dawn”. The First Order taught esoteric philosophy based on the Hermetic Qabalah and personal development through study and awareness of the four Classical Elements as well as the basics of astrology, tarot divination, and geomancy. The Second or “Inner” Order, the Rosae Rubeae et Aureae Crucis (the Ruby Rose and Cross of Gold), taught proper magic, including scrying, astral travel, and alchemy. The Third Order was that of the “Secret Chiefs”, who were said to be highly skilled; they supposedly directed the activities of the lower two orders by spirit communication with the Chiefs of the Second Order.

Check out the film below. It’s adorable!