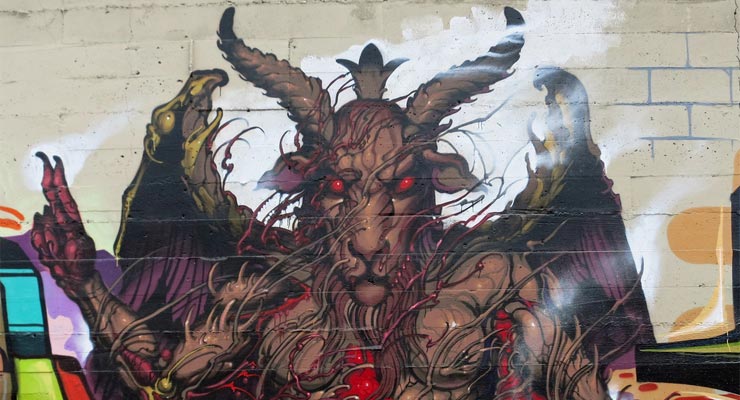 The image of Baphomet has graced everything from heavy metal albums to religious propaganda, and tends to be used as a symbol of evil. Yet Baphomet is a far, far more complex symbol.

You’ve probably seen the image of Baphomet used as a stand-in for Satan, whether that’s by would-be Satanists or paranoid Christians.

What you might not have learned, however, is how Baphomet has nothing to do with evil or Satanism as it is commonly understood, and actually has a much more profound history. Here, we reveal the full history of the icon. 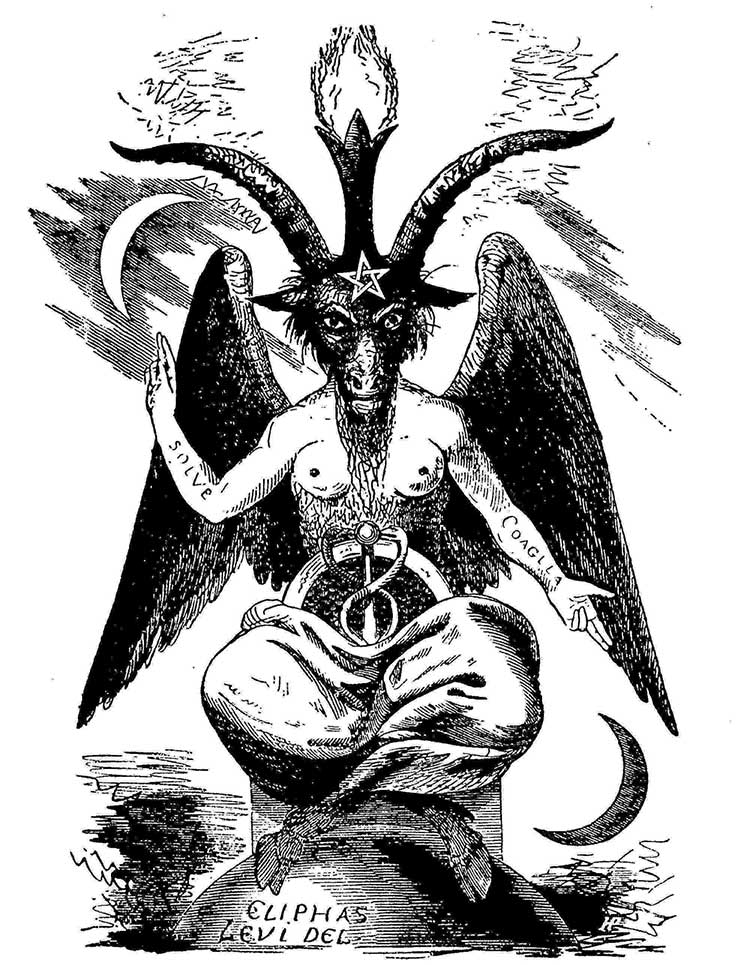 The modern Baphomet icon is commonly associated with imagery of a goat-headed diabolical idol allegedly worshiped by the Knights Templar during the 13th and 14th centuries. In reality, the connection between Baphomet and the primordial goat-headed god did not emerge until the 1850s. The historical origin of the term is perhaps more fascinating than the mythologized version: a tale of mistranslation, a courtroom conspiracy, and a gradual metamorphosis into a profoundly influential occult icon.

The earliest known use of the word Baphomet comes from a letter written by a French crusader in 1098. He describes the Crusaders’ enemies in the Holy Land “Calling upon Baphometh” prior to battle. Another early chronicle of the crusades refers to mosques as Bafumarias. Today, it is commonly accepted that Baphomet, similar to the Old French word Mahomet, refers to Mohammed, the Prophet of Islam. At the time, European Christian dogma viewed worship of Mohammed as idolatry. This doctrinal Islamophobia was harnessed by a Medieval European ruler in the form of a witch-hunt targeting his political opponents.

The Knights Templar Arrested… and the Legend of Baphomet Grows

Being arrested as a heretic was particularly unpleasant in Medieval France due to Inquisition-style torture techniques. The punishment would continue until the prisoner confessed. King Philip accused the Knights Templar of spitting and urinating on the cross, engaging in homosexuality, and worshipping Baphomet as an idol. Baphomet, presumably a reference to Mohammed, was allegedly incorporated into the Templar practice during their time mingling with Islamic culture in the Middle East. Basically, King Philip was accusing the Knights Templar of having become Muslims. Similar charges were leveled against other political opponents of King Philip IV, and are also presumed to be fabricated.

After a battery of unimaginable torture, many of the Templars invented confessions to end their suffering. Some admitted to worshipping an idol, though inconsistent accounts varied from the severed head of John the Baptist to a cat statue with three faces. There was no reference, however, to a goat-headed icon throughout the trial. After escaping the inquisitors’ torture, most Templars recanted their confessions, and were subsequently burned at the stake. Threatening military action, King Philip forced the Papacy to disband the Templar Order completely.

Over the next 500 years, scholars and mystics alike speculated upon the verity of the accusations leveled against the Templars. A rich mythology arose, with tales linking the Templar Order to ancient mystical wisdom and artifacts discovered during their campaign in the Holy Land. The narrative construct of a group or individual venturing from Europe into the Middle East or North Africa and returning with Magical Ancient Knowledge was a recurring theme in Renaissance occult thought. The same themes appear in well-known grimoires such as the Book of Abramelin and Hermetic texts.

In 1818, the term Baphomet re-emerged in an essay published in Vienna speculating upon the nature of the idol worshipped by the Knights Templar. The author, Joseph von Hammer-Purgstall, claimed that the Templars were indeed idol worshippers, and that the Baphomet refers to a hermaphroditic stone figure borrowed from Egypt or the Gnostic Christian Ophites. Even at the time, scholars called out von Hammer-Purgstall’s essay as pseudohistory and anti-Masonic rhetoric. After the release of this essay, many European museums began to catalogue “Baphomets,” small carved stone idols, which were either modern forgeries attributed to the Knights Templar or misidentified artifacts from other cultures.

The Final Transformation of Baphomet

The final transformation of Baphomet occurred in 1854. French ceremonial magician Elphias Levi re-imagined Baphomet into a figure he named the Sabbatic Goat. Representing the universe in the form of binary opposites, the Sabbatic Goat incorporates elements of the hermaphroditic stone Baphomets and the symbolic ideals of the Templar Baphomet myth. He mingled these elements with Occult, Kabbalistic and Catholic imagery.

Though Levi began his career in the Catholic seminary, he soon left to pursue romance and magick. He believed that the Sabbatic Goat served as a collective representation for all magickal icons that survived the spread of Christianity from earlier polytheistic or animistic traditions. Though the Goat-Headed Baphomet was not worshipped by the Knights Templar, the Sabbatic Goat references the Templar plight in the spirit of all forms of social oppression justified by the dominant religious rhetoric of the time.

The most unique and iconic element of Levi’s Baphomet is the head of a goat upon a humanoid body. The goat head was borrowed by Levi from the Egyptian goat-headed deity Banebdjedet, who represented the soul of Osiris. Levi was also inspired by Pan, another goat-headed god equated with primal worship and social taboos of the time. The overall impression of the Sabbatic Goat is very similar to that of the Devil card from Marseille Tarot, which may have been Levi’s template. The Latin words on the Sabbatic Goat’s arms, COAGULA and SOLVE, mean to join together and take apart. These reference the powers claimed by Church leaders to be taken from God by his earthly representatives. In Levi’s context, these terms represent the dualistic power of magick that can be realized by any devout, initiated practitioner.

Eliphas Levi’s Baphomet was also adopted by Aleister Crowley, most famously in his Gnostic Mass. The deep symbolic nature of Baphomet fit well with Crowley’s interpretations of Renaissance and Medieval ritual magick. It also incorporated familiar elements of binary cosmology that supported Crowley’s hermetic ideology. Crowley described Baphomet as a divine androgyne, representative of mystical perfection through a union of opposites. He also equated this union of opposites to that which occurs when a sperm and egg join. This line of thought, triggered by his reflections upon Baphomet, was profoundly influential in Crowley’s theories of sex magick.

Crowley also connected ideas of suppressed knowledge and secret worship, thus Baphomet, with Satan. He argued that contrary to traditional Christian thought, Satan represented “not the enemy of Man, but He who made Gods of our race, knowing  Good and Evil; He bade ‘Know Thyself!’ and taught Initiation. He is ‘The Devil’ of The Book of Thoth, and His emblem is BAPHOMET, the Androgyne who is the hieroglyph of arcane perfection… He is therefore Life, and Love.”

Today, the Baphomet in the form of Eliphas Levi’s Sabbatic Goat is one of the most recognizable occult images in the world, with strong ties to artistic and popular culture. It directly inspired the iconic Devil card from the Rider Waite Tarot system. The Sigil of Baphomet, depicting the Sabbatic Goat within an inverted Pentagram, has been adopted as the modern Church of Satan’s logo. Baphomet also made the news recently when members of the Satanic Temple attempted to have an eight foot tall Sabbatic Goat statue erected beside the Monument of the Ten Commandments at the Oklahoma State Capitol.

With its long and deeply symbolic history, Baphomet is a powerful icon that garnishes fear and respect to this day. Baphomet has been transformed by time and culture into a rich icon of our modern occult heritage. It also serves as a poignant reminder of the dangers of state-sponsored, religiously justified oppression.

Look no further than Ultraculture’s free guide to chaos magick.