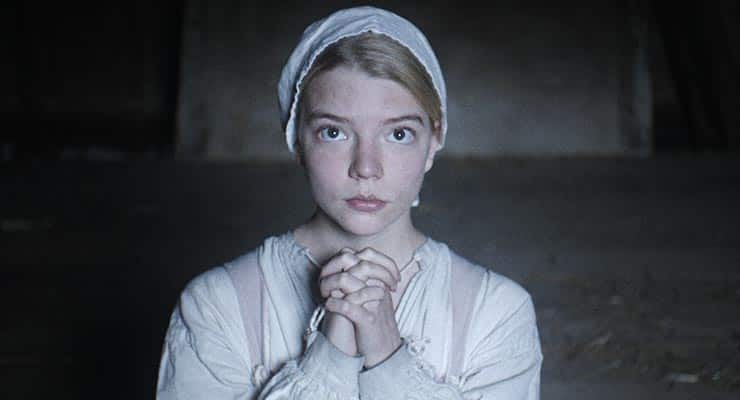 The VVitch: A New England Folktale is currently getting a lot of hype. But could its depiction of what it means to be a witch be a little too problematic for real-life witches?

Before I spiral into the many reasons why Robert Eggers’ The VVitch: A New England Folktale (2015) was shockingly not my cup of herbal tea, let me just apologize to the aesthetes out there. Yes, I will admit that both the cinematography and the score of the film were quite gorgeous. Cool, good, yeah. But, as with any art form, there’s more to discuss here.

When I saw the trailer for The VVitch, I began counting down the days until its premiere. The snippets suggested an empowering feminist tale charged with occult revisionism. Images of goat udders leaking blood and disappearing babies suggested hints of menstruation, anarchy and a reexamination of female hysteria. I had hoped The VVitch would be one of the first films to explain early paranoia from the perspective of those accused. 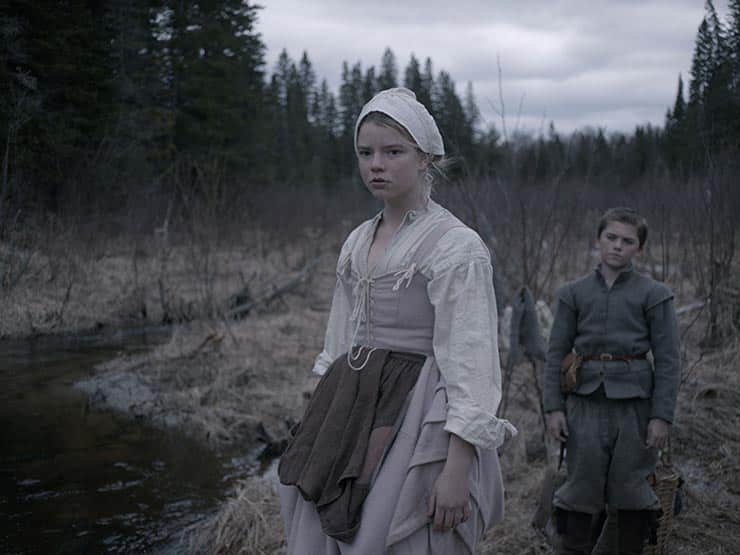 Eggers chose to play this 1630s “folktale” straight. By straight, I mean the screenplay for The VVitch took quotes and excerpts from trials and diaries from the Winthrop era of American uncertainty and paranoia, and said “what if they were telling the truth?” What ensues is a film about a traditionally puritanical, yet prideful family who is banished from the larger plantation which they call home. They travel into a heavily forested and purposefully barren-looking New England landscape. If you remember class notes from reading The Crucible in the ninth grade, you’ll recall that the forest was a major source of paranoia for New England’s early settlers. Not only was their xenophobic idea that the forests might be filled with Native Americans, but of course there was also the purely paranoid idea that the forest held Satan and all of his followers.

So, right off the bat, the film’s environment—alienated, bleak and vast—sets the viewer up for a stereotypical perspective of the Puritanical way of life. This would be cool because it’s the suggestion that there are real witches, which is a truth we have come to acknowledge in contemporary times. Since the film come from Puritanical accounts, we instead see the witches of media past: ugly, manipulative, ungodly, and selfish.

RELATED: Here’s 9 Excellent Movies About Magick and the Occult

A series of odd things begin to happen after the characters settle in their new isolated home. The first of which is the disappearance of baby Samuel. His older sister Thomasin (notice “sin” has been strategically placed in her name) plays an innocent game of peek-a-boo with the child, only to find that he is taken from her in a matter of seconds. In the most disturbing scene of the film, the groin of an elderly nude woman is positioned over the naked child. She takes a knife to the child’s stomach, and then the scene changes to show her churning the remains like butter. It can be implied that the elderly woman is making a flying ointment from the baby’s remains. Such methods of creating these ointments date back far further than the 1630s. It actually stems from early modern conceptions of witchcraft, and it is often depicted in a way that is tied to evil or Satanism. 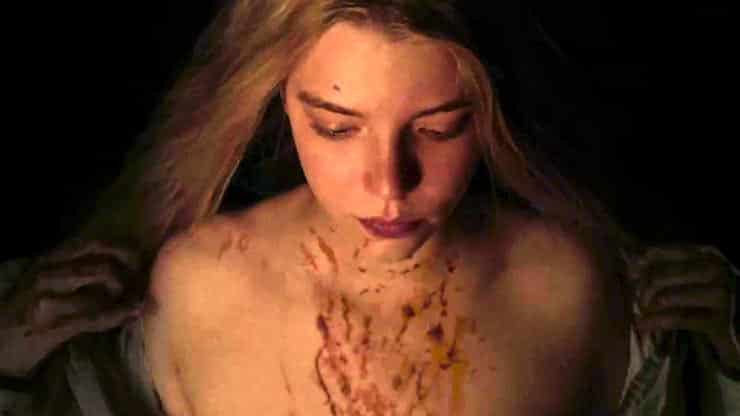 This is the first problematic scene in the film. Not only do we have the stereotypical “crone” mutilating babies for personal gain, but the crone is also using a completely contrived form of witchcraft to do so.

So the family is devastated about the missing baby, and they begin to blame the blossoming teenage Thomasin, because of course. Fear not, because not everyone blames Thomasin, though. Her younger brother, Caleb, is far too busy objectifying her, and wishing he could find some apples, if you know what I mean. His character is basically Puritanical and early Christian sexual suppression wrapped up in one horny little pre-teen. To be fair, this is an expected, yet suitable archetype for such a film. Suppression was a major cause of witch hysteria to begin with. So many of the innocent lives lost in the Salem Witch Trials (which would occur sixty years after this time period) stemmed from sexual and financial frustration that was not properly addressed because of religious beliefs.

Caleb travels into the woods and finds another witch. This time, she is beautiful, busty and standing in front of a quaint cottage. She lures Caleb nearer to her, a la Hansel and Gretel.

Clearly, there are two sides to this seduction, because Caleb becomes possessed and then chokes to death on an apple. I can appreciate this new look at the Eve paradigm—a young man being tempted by a devil disguised as a female is interesting. But that’s just it. We still seem to end up with the Grimm-esque image of a demonized woman/witch.

While the history was certainly well-researched, the time we live in now exemplifies a new level of understanding and tolerance of New Age, occult and Wiccan practices. The film does not even bother to scratch the surface of understanding, and instead leans into age-old media tropes that thousands of practitioners of the craft have fought to eliminate. While witch hysteria was entirely unfounded, witches themselves have existed for centuries as midwives, herbalists, medics and so on. It would have been refreshing to see such empowered woman portrayed in this film. 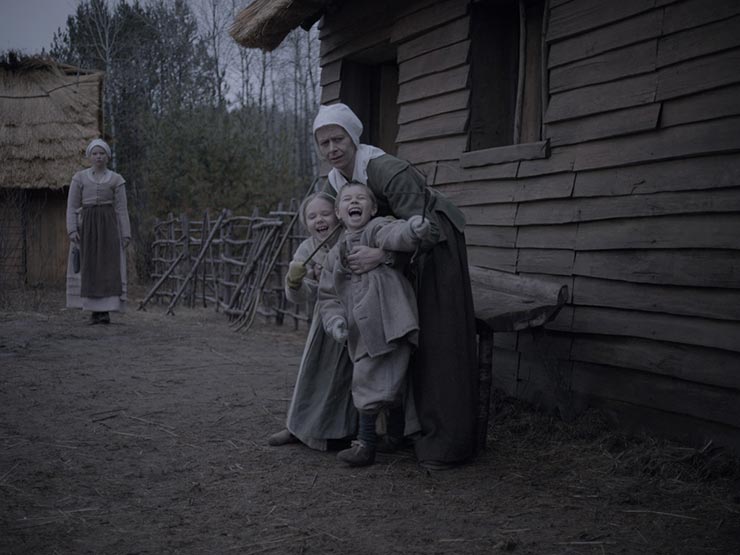 In the film’s end, Thomasin is targeted by her own flesh and blood, as they all persist in stating that she must be the witch causing all of their misfortune. Up until the end, Thomasin is entirely sympathetic, and the only thing she is guilty of is being an independent young woman in a time that did not offer a place for such individuals. However, in the final scenes, she commits matricide. Then the ever-present family goat, Black Phillip, reveals that he is Satan himself, with the film’s tagline: “Wouldst thou like to live deliciously?” He offers Thomasin his book, and has her sign over her soul. She then goes off to dance naked around a fire with the other witches of the forest. They each fly up into the air during the assumed Sabbath (thanks baby Samuel!) and Thomasin looks genuinely happy for the first time in the movie. This scene screams, “look, it’s beautiful to be a witch!”

And this is so true, but for zero of the reasons that the film suggests. Do practitioners find personal empowerment? Yes, one hundred percent! But this never comes at the cost of another’s well-being. Being a witch is not about being manipulative, evil or satanic. It’s about connecting with the body and the earth to find personal triumph and love.

So, while the film does inspire a sense of female liberation, I hoped that it might also offer a more educated message about modern occultism. While the ending perspective is on the side of girl-gone-witch, the majority of the film is seen from the viewpoint of the accusers. None of the witches throughout the film speak or offer insight into their practices. They are instead metaphysical backdrops intended to represent fear that can either be avoided or embraced. Either way, they are not depicted as human beings. It’s difficult to connect with a film revolving around the rationale of oppressors.

(Images © A24 films. Used for review purposes only.)