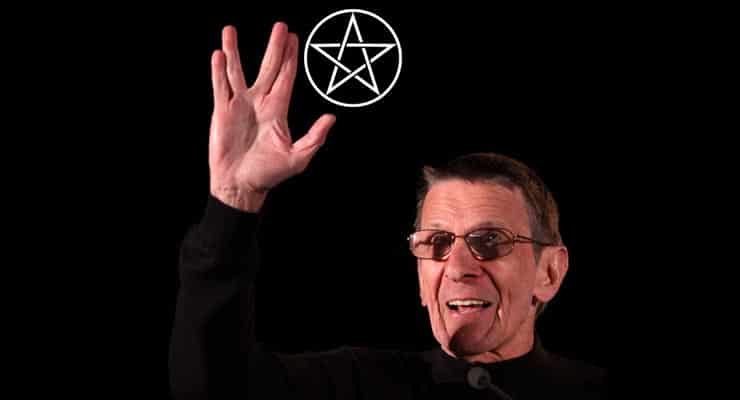 Leonard Nimoy, in fine form, narrates the 1996 documentary “The Witches,” exploring the modern witchcraft phenomenon. The entire documentary is here!

Below, watch none other than Leonard Nimoy narrate a full documentary on witchcraft, from 1996. Leonard Nimoy was always the master of weird TV—his stint on “In Search Of” in the 70s and 80s turned millions onto weird mysteries and the paranormal.

This is actually an episode of Ancient Mysteries, a show that ran on A&E from 1994 to 1998 and saw Leonard Nimoy returning to his old schtick from In Search Of…, another great show (from the Seventies in this case) that, as with Ancient Mysteries, saw Leonard Nimoy narrating investigations into the supernatural, weird and unexplained. These shows turned on whole generations of kids to the dark side and probably scared the bejesus out of quite a few of them in the process.

Like the Man, Myth and Magic books and various other spooky books, encyclopedias and shows aimed at young people, Ancient Mysteries provided a portal to the unknown. These shows usually ran at weird times, like late at night or early in the morning, and constantly seemed to be on reruns. Like Gilligan’s Island, they never quite went away (thank goodness).

In a lot of ways, Leonard Nimoy’s narration on In Search Of… and Ancient Mysteries was really the fore-runner of entire networks like the History Channel’s constantly pumping out schlocky shows and pseudo-documentaries on totally spurious subjects (Ancient Aliens anyone?). But Leonard Nimoy came first, and he should really be remembered for it, too. After Star Trek ended, these shows were Nimoy’s main gig, and he probably put way more man-hours into making these shows than he ever did into Star Trek, although maybe not when you count all the time he spent on the convention circuit.