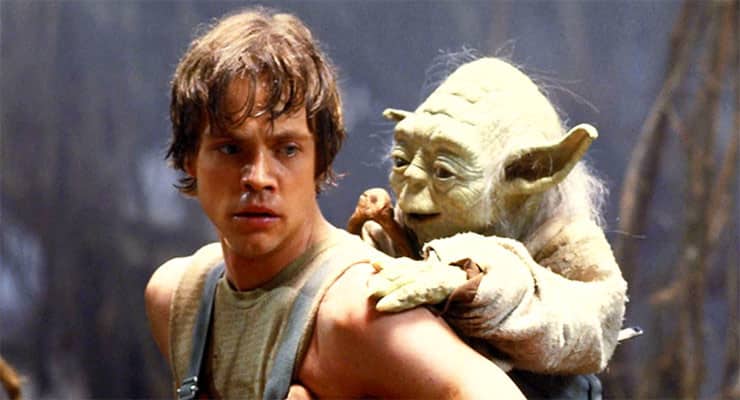 Star Wars isn’t just a series of movies—it’s an incredibly profound lesson in life, spirituality, magick and the journey of spiritual awakening. Here’s seven potent lessons it can teach us about Knowing Thyself…

Star Wars might be the most popular science-fiction franchise ever made. What people don’t know is that the original trilogy is also an incredible good introductory course in esoteric spirituality. George Lucas famously described himself as Buddhist-Methodist, and openly admitted that the original trilogy is inspired by Joseph Campbell’s The Hero with a Thousand Faces. The next time you need to explain the basics of magick, the occult and esotericism to your friends, use Star Wars. Here’s seven lessons any budding magician can learn from Lucas’ cinematic masterpiece.

1. Don’t Ignore the Call of the Spirit

In the first film of the original Star Wars trilogy, Luke is saved by “Old Ben,” a hermit living on the outskirts of Tatooine, after a seemingly random series of circumstances. Later, when Ben views Princess Leia’s distress recordings, he reveals himself to be the exiled Jedi Knight Obi-Wan Kenobi. Even though Luke initially declines the Jedi’s offer to train with him, he accepts his destiny when he discovers that his family has been killed by raiders. This is the first spiritual lesson: The immediacy of the call.

In the Bible, prophets are often recruited by “the spirit of the Lord,” which wants them to initiate spiritual and social renovation. The prophet Elijah orders Elisha to leave his family, and Jonah, after running away from God (and spending time in the belly of a fish) finally decides to do his Will. Similarly, in some Buddhist sutras, the Buddha’s disciples immediately relinquish their worldly pursuits in order to practice the dharma.

Luke’s education in “force philosophy and physics” is provided by Yoda, a being so charged with transcendent wisdom that Luke mistakes him for a delusional thief. By the time Luke’s training begins, Yoda is over eight hundred years old, and is the last Grand Master of the Jedi Order. Not only does Yoda know the Force, he lives it. As the wise teacher, Yoda—like Socrates—assists in banishing Luke’s arrogance and helping Luke’s natural abilities to awaken. The role of the guru is not as prevalent in Western mystery traditions, but is extremely important in Kabbalah, Sufism, Hinduism and Eastern martial arts. Usually, there’s no way for the apprentice to be fully “initiated” and perfected unless he spiritually succeeds his master. This can be as simple as a laying on of hands, or an oral transmission of secrets.

Lots of different friends help Luke to overcome the Galactic Empire in Star Wars. One of the running gags of the series is that the humans are constantly saved by the antics of robots R2D2 and C-3PO. Luke’s friends Chewbacca, Han Solo, Leia, and Lando Calrissian are also not Jedi, but their actions are nonetheless crucial for the rebellion. Occultists are free to blow off their old friends and seek the company of people like them, but sometimes this tends to prevent the full unfolding of spiritual power, which is by nature non-discriminatory.

In Star Wars, the Force moves in and infuses everything, even people who aren’t fully aware of it. Everything has sentience and—like the Anima Mundi in Platonism and Stoicism—the universe is composed of and functions as the sum of innumerable parts. In life there are many kindred spirits, all working towards the same end.

Technically, Luke could have just developed his powers and fled the galaxy, abandoning all of his friends to go into solitude. Instead, he chooses to confront a presence that is plaguing the lives of millions in his galaxy. In Hindu and Buddhist metaphysics, the Bodhisattva is a great being that delays his own liberation from the world because of his compassion for all human beings. The Bodhisattva is a “shepherd of men” and serves as a beacon of light, like the Dalai Lama. Additionally, the first article of the Rosicrucian Fama Fraternitatis states: “That none of them should profess any other thing than to cure the sick, and that gratis.” Thus, adepts have a responsibility to unconditionally care for all souls. In Star Wars, the Jedi Council resembles the Rosicrucians and the Ascendent Masters from Theosophy. Though they are enlightened, they are actively involved in guiding and preserving the well-being of the Republic from a distance.

Magick is nothing without belief. The most important thing for any beginner to understand is that no true change ever occurs without a consolidation of a person’s will. There’s a famous scene in the swamps of Dagobah where Luke is unable to retrieve his X-Wing fighter from the swamp. After Luke’s half-hearted attempts, Yoda sighs and barely lifts a finger to free the spaceship from the depths. Luke is flabbergasted: “I don’t believe it,” he says. “That is why you fail,” replies Yoda.

Anakin, Luke’s father, is originally thought of as the messiah, the one that will bring balance to the Force. However, despite his unrivaled skills and strength, Anakin is literally engulfed by the flames of his own demons. When he is still a novice, Anakin’s mentor Obi-Wan Kenobi always reminds him to “be mindful of your thoughts, for your thoughts determine your reality.”

RELATED: Is the Lord of the Rings Trilogy a Gnostic, Occult Parable?

Anakin’s ignorance of this simple fact actually brings about his downfall. He doesn’t realize how many desires he has—he doesn’t see how scared and angry he is. That’s why it’s so easy for him to “come to the Dark Side” and be transformed into Darth Vader. Sometimes occultists will go too far too quickly with practices that they’re not at all ready for. In many cases, this can lead to frightening—even fatal—outcomes.

Luke has to travel all the way to Dagobah at edge of the galaxy in order to undergo training with Yoda. Usually, all seekers of interior illumination have to make a pilgrimage or journey in order to move on with the next stage of their spiritual evolution. In mythology, Hermes Trismegistus and Odin are gods of magic and communication—both are shapeshifting deities that are constantly wandering around the world. Odysseus is often called “polytropos” (much-wandering) or “metis” (cunning) in Homer’s epic. Through his adventures, the Greek hero becomes a well-rounded individual. Important figures in modern magic have also been extensive travelers; Aleister Crowley climbed mountains and slept in Egyptian temples, Gerald Gardner worked in Sri Lanka and Malaysia, and Manly P. Hall—like the enigmatic Count St. Germain—appeared all over the globe.