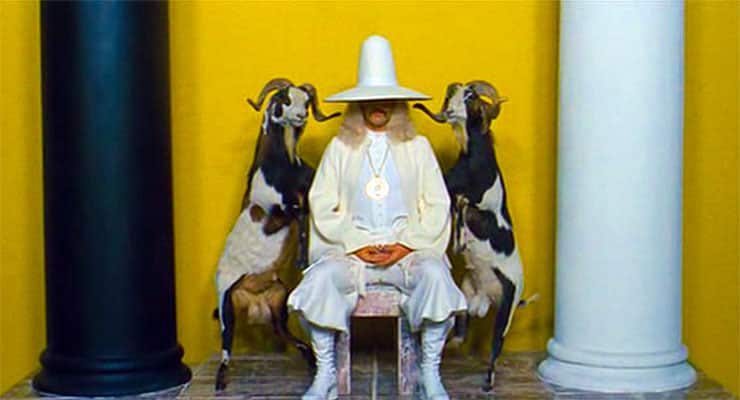 We rounded up 9 of our favorite films about magick and the occult!

Here’s a roundup of nine great films about magick and the occult. Obvious choices (Rosemary’s Baby, The Exorcist), as well as films that present the subject in an exploitative manner (such as those of Dario Argento) have been left out… as have the Harry Potter movies, because that’s just too easy.

1. Häxan: A Story of Witchcraft Through the Ages (Benjamin Christensen, 1922)

Director Benjamin Christensen’s 1922 silent dramatized documentary explores the hysteria behind centuries of witch hunts, and reframes the practice and belief in witchcraft within the psychoanalytic context that was popular at the time of the film’s release. Based largely on Christensen’s research into the Malleus Maleficarum, a 15-century manual for German inquisitors, Häxan contains some of the most meticulously recreated scenes of medieval history committed to film at the time. While its psychological explanation of witchcraft and the hysteria of the inquisition is somewhat laughable today, Häxan remains a cult favorite due to its haunting and surreal depictions of the Witches’ Sabbath, magick and the cruel machinations of inquisitors.

You can watch the full version of Häxan from the 1960s, featuring narration by William S. Burroughs here.

In this 1957 supernatural horror film, director Jacques Tourneur revisited the theme of magick and science as dueling paradigms that he perfected during his tenure with Val Lewton. In Night of the Demon, an American psychologist travels to England to debunk the supernatural claims of a notorious black magician—Niall MacGinnis is great as antagonist Dr. Julian Karswell, a cartoon cut-out depiction of Aleister Crowley who heads a satanic cult in the British countryside.

Trivia: Both Kate Bush’s Hounds of Love and Coil’s Queens of the Circulating Library contain samples of dialogue from this film.

At first glance, this is just another campy horror film typical of the Roger Corman and Jean Rollin era. However, what emerges is a far more serious psychedelic melodrama, written with an insider’s view of magick and the occult. It truly has to be seen to be believed. The film’s title character is a ceremonial magician that lives in a sewer, who gets involved with the rich and powerful. In the film’s most outlandish scene, Simon and his young assistant crash a Wiccan ritual headed by Andy Warhol superstar Ultra Violet (who, in real life, later converted to Mormonism). Legend has it that Simon is based on real-life Southern California occult legend Poke Runyon.

Honorable Mention: Beyond Lemuria (2005), an equally must-be-seen-to-believe insider occult movie written and directed by and starring Poke Runyon. If you can find a copy of this ultra-rare movie on video you are in for a real treat.

Kenneth Anger’s surreal short film differs from most of the films on the list in that it depicts magic not as a source of horror, but ecstasy. In 30 beautiful minutes, Anger celebrates the beginning of the Age of Aquarius and crafts a “cine-poem” depicting the ritual magick of Aleister Crowley, shot on location in Egypt with characters standing in as Isis and Osiris. The film’s psychedelic score was written and recorded in prison by Manson family member Bobby Beausoleil.

In a 1976 interview with Roger Ebert, Anger discussed how he believes magickal states of consciousness relate to the film medium:

“Some movies can be the equivalent of mantras. They cause you to lose track of time and when you become disoriented magical things can happen. Magic causes changes to occur in the universe. You can mix two elements together and get an unexpected result just beyond the edge of what you realize.”

Alejandro Jodorowsky’s cult classic mind fuck The Holy Mountain is a film that rewards multiple viewings. It’s one of those rare movies that makes less sense to the rational mind after repeated viewings, which might be a sign that its working its magic. Regarding the film’s heavy use of imagery from the Tarot, Jodorowsky commented:

“The Tarot is an optical language, and it’s like a meter: It says, ‘What do you ask?’ Tarot is not speaking with words; it says you should think with dreams, with intuition. The unconscious is not a language we speak like the conscious; unconscience we speak with actors, with image, with sounds, with colors. This is the language of Tarot, and the movies.”

The Wicker Man is a classic of paganism in cinema. The film’s protagonist, a repressed Christian police sergeant, travels to a remote island off the coast of Scotland to investigate the disappearance of a young girl and finds himself in the midst of a community fanatically devoted to the Old Ways. Aside from its English folk soundtrack, this film is perhaps best remember for its insidious payoff at the very end, when the uptight protagonist discovers the islanders’ true motives for summoning him.

Honorable Mention: Don’t Look Now (1973), Nicolas Roeg’s film about a married couple who move to Venice, Italy after the death of the daughter. The wife becomes entangled with a blind woman claiming to have psychic powers, and the husband is plagued by visions of the deceased daughter in her red raincoat. Echoing The Wicker Man’s doomed-from-the-start scenario (although far more fiendish), Don’t Look Now is a meditation on how guilt and repression can wreck the human psyche.

Ken Russell directs a script by Paddy Chayefsky about a psychologist obsessed with discovering the source of human consciousness through experiments with entheogens and flotation tanks. Chayefsky allegedly based the protagonist of Altered States on John C. Lilly, and there is more than a little of Terence McKenna in the character’s physical devolution into a stoned ape. One of the truly great films about chemognosis.

Honorable Mention: The Devils (1971), Russell’s adaptation of Aldous Huxley’s historical novel The Devils of Loudun, about a 17th-century priest executed for witchcraft after a series of possessions took over a convent in France.

Skip the overly stylish American remake that tries too hard and go straight for this effortlessly terrifying Japanese horror classic. Hideo Nakata’s Ringu postmodern horror masterpiece about a mysterious videotape that kills whoever watches after seven days is a still relevant in its meditation on the power of viral media in consumer society. If you don’t believe in magic, then what do you call advertising?

Kubrick’s swan song Eyes Wide Shut needs no introduction. While it doesn’t depict anything supernatural, the film’s centerpiece—an epic masked ball ritual orgy—earns it a place on this list. Kubrick tapped into public fears about secret societies and the new millennium for his film that on the surface is about a deteriorating middle class marriage. Adding to the film’s mystique is Kubrick’s unfortunate passing shortly after the film concluded production, which many conspiracy theorists have taken to mean he was “assassinated” for “revealing too much.”

To keep the film festival going, check out our second article in this series, Here’s 9 More Excellent Movies About Magick and the Occult!