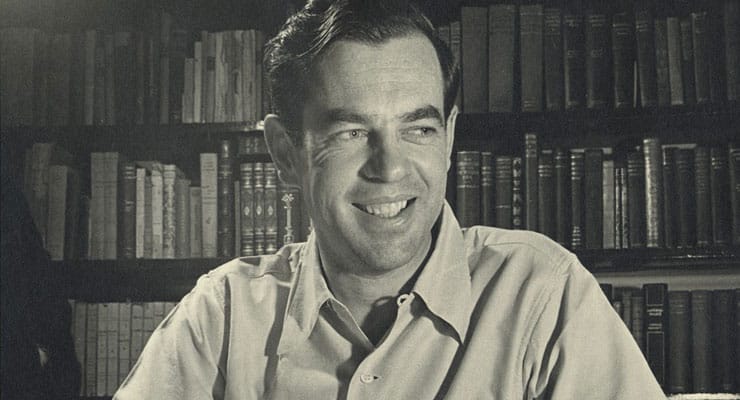 Epic Spotify playlist of lectures by Joseph Campbell, on how mythology can help us understand ourselves, grow and become more enlightened

Joseph Campbell was one of the greatest philosophers of our time. His work in mythology was a huge influence on Hollywood. George Lucas based Star Wars on Campbell’s work.

Campbell believed that mythology has similarities around the world. He thought that the Hero figure is important in every single culture. Stories around the world revolve around a hero who has to go through trials to become a king. This is the structure that modern movies use.

Joseph Campbell studied Carl Jung, who studied magick and alchemy. Campbell’s work is all about mythology and magick. He saw mythology as the mirror of the soul.

You’ve felt Campbell’s influence if you’ve seen any movie in the last fifty years. But now you can hear Campbell in his own words.

The Spotify playlist below contains over 48 hours of his lectures. You’ll love it if you’re a budding writer or just interested in mythology and magick.

“Life has no meaning. Each of us has meaning and we bring it to life. It is a waste to be asking the question when you are the answer.”

“Your sacred space is where you can find yourself again and again.”

“Follow your bliss and the universe will open doors where there were only walls.”

“The privilege of a lifetime is being who you are.”

“Life is without meaning. You bring the meaning to it. The meaning of life is whatever you ascribe it to be. Being alive is the meaning.”

“Computers are like Old Testament gods; lots of rules and no mercy.”

“It is by going down into the abyss that we recover the treasures of life. Where you stumble, there lies your treasure.”

“A hero is someone who has given his or her life to something bigger than oneself.”