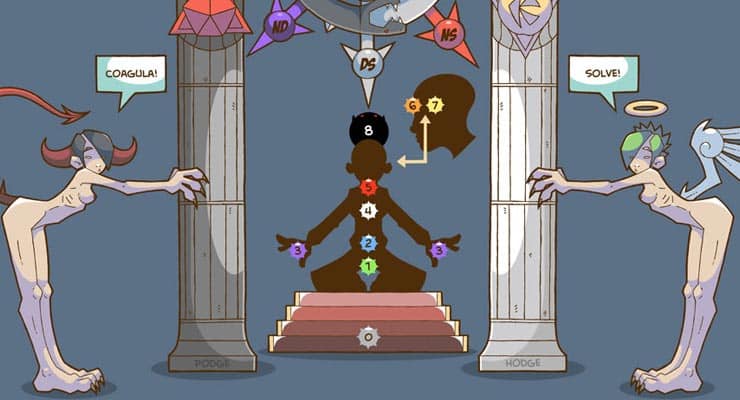 The 8-Circuit model maps the possible levels of consciousness, as developed by Timothy Leary and Robert Anton Wilson. Explore them with this handy guide and incredible visual map!

Throughout history, shamans, yogis, psychonauts and magicians have sought to map the levels of consciousness that it’s possible for human beings to access. This is where we’ve inherited incredible models like the chakras and the Sephira of the Tree of Life. But now I’m going to give you a much more modern map of reality—the Eight-Circuit Model, as developed by Dr. Timothy Leary and Robert Anton Wilson in the 1960s and 70s. Leary was inspired by the Hindu chakra system to create the Eight Circuits, but instead of being centers of the body, the eight circuits represent hypothetical stages in the evolution of human consciousness. (Hint: The chakras do also, it’s just not spelled out explicitly.)

The eight levels of consciousness start with the most basic forms of mentation available to human beings and progress up to the more rarefied states experienced by shamans, meditators and other individuals able to catalyze such states through their own effort.

The eight levels of consciousness are as follows (scroll down for an incredible diagram of the circuits as created by Ultraculture’s Archtraitor Bluefluke!):

Circuit One: The Oral Biosurvival Circuit.

This is the baseline consciousness of a human being: the pure “survival” mode of an infant looking for nourishment. Whether it finds nourishment or not determines whether the organism will later view the world as a safe place or not.

This is the circuit experienced by the “terrible toddler” who has begun walking and begins to learn lessons of boundaries, pecking orders, domination and submission. You can see the same behavioral patterns in a dog. This is where humans get their imprints about where they stand in the order of things.

This is the realm of numbers and written language, and is imprinted when somebody learns how to read and write, thereby accessing the “magical” power of binding time by representing reality in symbols. It is where we learn “rules” and “laws.” 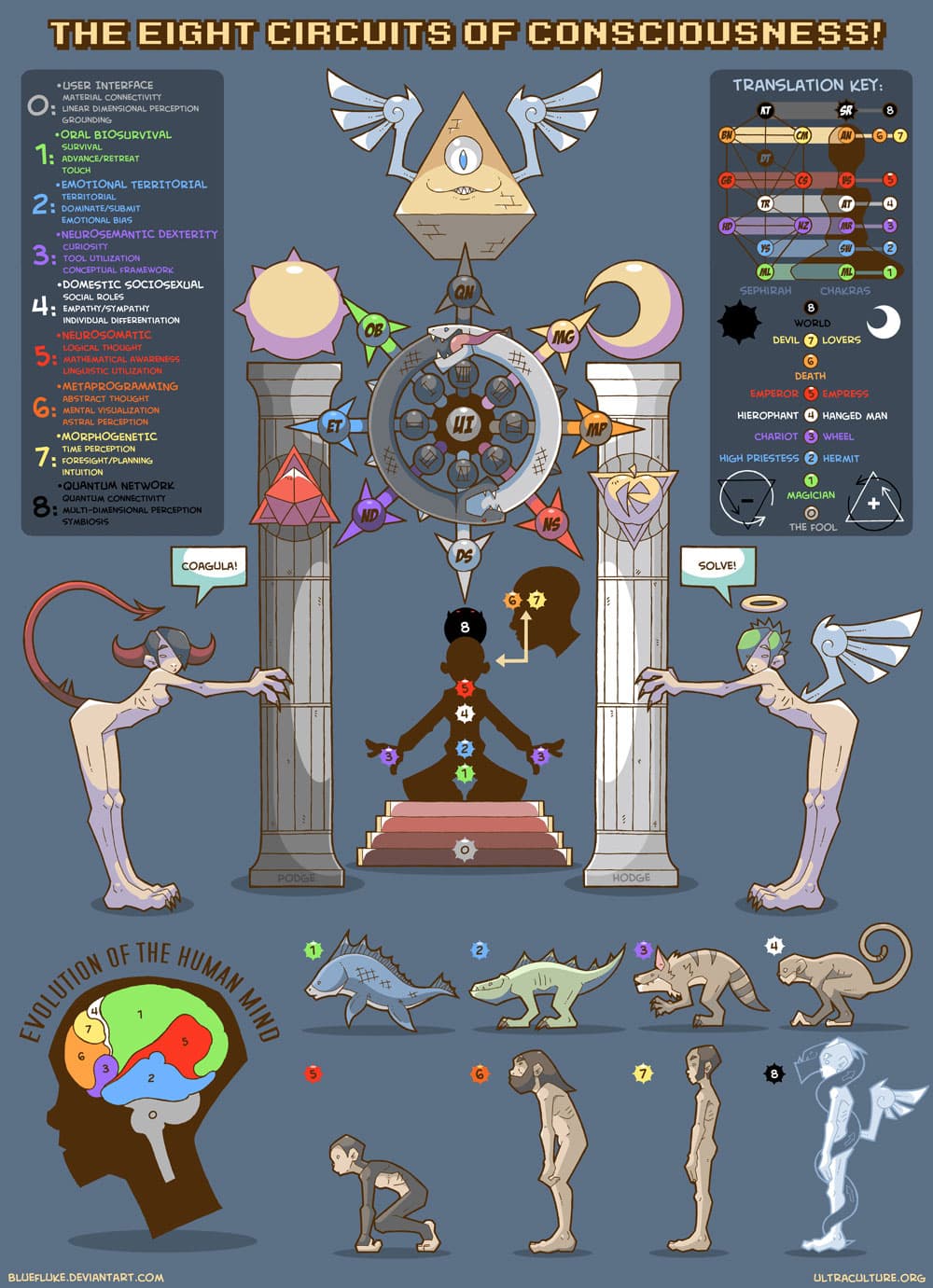 This circuit is opened by puberty and/or initial sexual experiences. This is where we imprint tribal ideas of right and wrong—as we are conditioned by society with subtle but incredibly powerful messages about who we should have sex with and under what conditions. This forms the basis for tribal morality and reproductive rules.

The four preceding circuits are the province of nearly everybody. They are the baseline for making a human being, and most live their existences within these four circuits alone. Accordingly, we see most of our major social and tribal battles fought in the second circuit (territorial battles between groups, up to the size of nations), the third circuit (wars fought over scriptural “truth”—mass murder over symbols and whose symbol set is the right one) and the fourth circuit (sexual freedom).

The next four circuits, as Leary and Wilson had it, are increasingly rarefied, and experienced only by progressively smaller groups of forward thinkers.

“I want to feel good.” For instance: People who shop at health food stores, yoga addicts, people who go in for massages and other forms of body therapy, polyamory groups, stoners, extreme sports fanatics and anybody else who seeks some form of “high” which lifts them out of the mundane rules and restrictions of the earlier circuits, even if temporarily.

This is where you figure out how to change your reality, which practically speaking means that you start dropping all your old imprints that you picked up via nature or nurture and start re-imprinting yourself. One example: Sigil magick. Neuro-linguistic programming has some techniques for this, but doesn’t really go anywhere in particular. Religions re-imprint you but largely to their designs. People who get here will usually talk about it by saying things like “I realized that I was just a story, that I wasn’t real, and that I could change that story if I wanted.”

The proverbial “breaking open the head.” Mystical experience in which some kind of deep access to the “collective unconscious” is gained. Leary and Wilson were writing in the 60s and 70s and were largely talking about acid here, but acid is mostly shit these days and there are many other ways to open this circuit. Magical practice is a big one.

Massive brain events, near-death experiences, truly weird paranormal experiences. People with a religious background who get here will talk about it in terms like “I saw God,” and whatever God they saw will usually be the one(s) they were imprinted with by their culture. It seems to occur with total overloads of the nervous system.

Hopefully this model (and it is JUST that—a model) is of use to you in your own ongoing magical work.