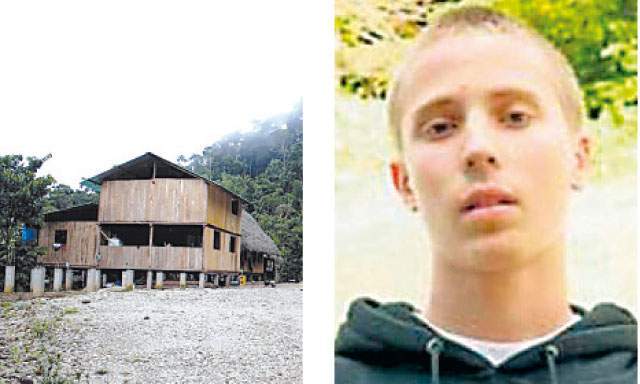 In August 2012, eighteen-year-old Kyle Nolan visited Peru for an ayahuasca retreat. Instead of enlightenment, he got buried in the jungle by the shaman, highlighting the dark side of ayahuasca tourism.

Kyle Nolan was a San Francisco teenager who became intrigued by the potent psychedelic brew after seeing videos about ayahuasca online, and like countless spiritual seekers, decided to hop a flight to Peru to experience the substance for himself. Unfortunately, during the course of the ayahuasca retreat, Kyle Nolan died, and was buried in the jungle by the shaman. Instead of a sweet New Age experience, Kyle Nolan got a horror movie.

Our 18 year old son, Kyle Nolan, went to Peru 8/16/12 for a 10 day shamanic workshop at the Shimbre Center near Puerto Maldonado. When he was not on his return flight from Peru to San Francisco on 8/26 the Shimbre Center told us Kyle wandered away from the center and was despondent. My daughter, Marion, and her mother, Ingeborg Oswald, flew to Peru to find our son, spent one week walking nearby towns and checking roads. No sign of our son. It was after Ingeborg and my daughter returned home we learned from Peruvian police that the shaman had lied to their faces. The shaman buried Kyle’s body in the jungle to cover-up his death during a ritual.

According to this Time report, Kyle Nolan died as a consequence of the shaman overdosing him.

Now, what I’m about to say is liable to piss off every hippie on Earth, but here goes: Kids, you cannot attain some super-transcendental cure-all patch for your life with dodgy jungle drugs. Now, granted, I have never done ayahuasca (I already lost all my sanity points, thank you kindly), but I HAVE had to deal with the converts of the Cult of Ayahuasca left, right and center. Some of them I have found to be very sincere and thoughtful people who believe that ayahuasca has the potential to help some of the blighted areas of Western reality. I have found others of them to be incredibly dogmatic “One Truthers” who seem to think the fact that they did a package vacation to the jungle to drink bark juice puts them in some kind of spiritual elite. These ones are sure that they know “the truth” and that anybody who hasn’t gone on the same culturally and pharmacologically questionable joyride doesn’t and that, therefore, their opinions on spirituality, life, and what side to butter toast on are completely invalid. Wait, isn’t that kind of the deal with every other One Truther religion?

RELATED: AyaAdvisors is Chock Full of Ayahuasca Reviews, for the Discerning Customer

Ayahuasca, for those who may not know what it is, is a mixture of South American bark and leaves that tastes horrible and makes you shit, barf and trip for hours on end while people around you probably play digeridoos and whatnot. It is meant to be an ultimate soul medicine which repairs all the horrible stuff done to you by modern society and shows you the jaguar god, which hopefully will not munch your head.

I first encountered the ayahuascies back in Europe in ’04, where an organized group was working to bring the stuff to the West. Their preferred method of dosing people was locking them in a room, dressing them in Catholic school uniforms, and making them sing Jesus songs while their brains melted and they shit themselves into adult diapers. (Not making this up.) At that time I only knew of a few people among the occult cognoscenti who were willing to take the ride. By the time I’d gotten back to New York, it was starting to bubble up there, too; by the next year I saw head shops in Vancouver selling the ingredients to make it yourself over the counter, Ancient and Deep Peruvian Shaman Who Knows All the Access Codes to Get You Through the Trip not included, unfortunately. I presume that in the place of such sage guidance, people played, I dunno, Rush “2112” or something. These days, in LA, it seems like everybody and their momma is Experienced, except for me, that perennial stick-in-the-mud. Well, I like my head, and I don’t want the f**king Jaguar to eat it.

Now, look. If you’ve had a transformative and sacred experience on the stuff, that’s wonderful, and I’m not knocking that; of course, if you had an experience that intense, me bitching isn’t going to matter much to you anyway. But I am concerned about the “drink this and get enlightened” approach that didn’t work in the sixties and I don’t see working now, with the same non-concern for the wreckage that approach can and does leave in its wake. William Burroughs did ayahuasca back in the 50s, for god’s sake, and thought it was cool but certainly not “the answer,” nor did it cure him of his heroin dependence. (It was only at the end of his life that Burroughs came to any conclusions about reality—”Love? What is it? Most natural painkiller what there is,” were the last words in his Last Words.)

RELATED: You Can Now Buy Ayahuasca on Amazon.com (No Dodgy Shaman Required)

There are as many approaches to spirituality as there are people, and the more intense, firey types will naturally be drawn to the more intense experiences, like, I dunno, doing ayahuasca in Peru and then going to India to get off with half of the Osho ashram. But the inevitable consequence of peak experiences is the valley experiences that follow them, the lows that follow the highs as the nervous system adjusts. This is why many gravitate to more stable paths, like the calm and sober base that a daily meditation or magical practice can bring. They do their daily workouts in the gym instead of trying to win the Olympics every weekend. A more mature approach? Maybe. Or maybe the gung-ho approach really is the best path for some.

But look, for the love of all that is decent, check your shaman’s credentials before the jaguar eats your head. I’ll be over here with my instant coffee.

(Click here to see Associated Press footage of the shaman’s arrest and the discovery of Kyle Nolan’s body.)