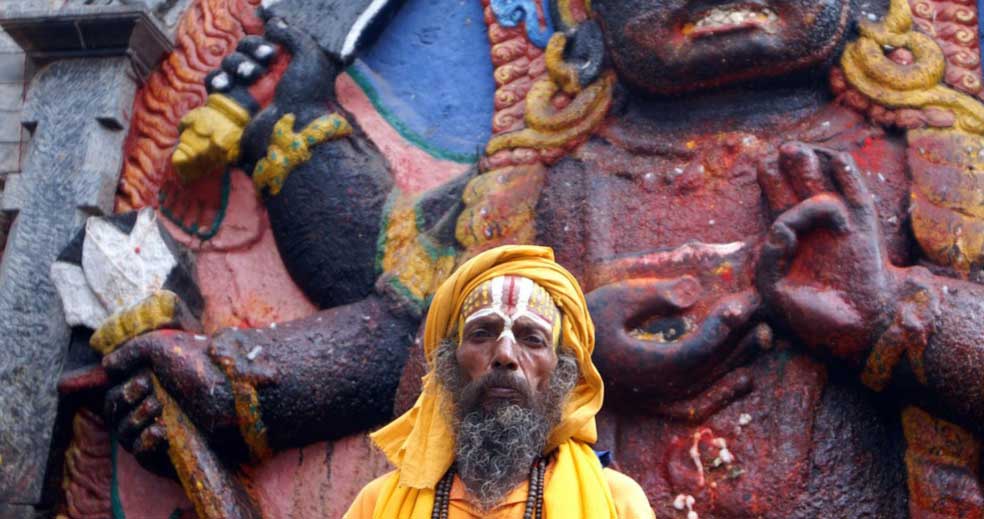 On Meeting Kal Bhairav, a Wrathful, Destructive and Fearsome Form of the God Shiva, in Kathmandu, Nepal While on Vacation With Jason Louv and Genesis Breyer P-Orridge

Kal Bhairav is the daunting Hindu god of absolute destruction. He wears a crown of human skulls and his earrings are living snakes. With six arms he carries machetes, severed heads, tiger skins and skinned humans. Kal Bhairav tramples corpses into a dusty red mist under his massive black feet. When I first met him, he towered twelve feet tall in Durbar Square, the Kathmandu mecca for shrines of Hindu gods.

I flew into Nepal the previous day with the legendary Genesis P-Orridge. We had recently witnessed the tragic death of her wife Lady Jaye, and traveled to Kathmandu to do a puja in her honor. We were surprised to find Jason Louv waiting for us on the doorstep of Nirvana Gardens, the hotel that would be our home for the next two months. Jason is a friend from New York who was journeying through India with the Naths, one of the many cults he joined on his search for enlightenment. He heard Gen and I would be in Nepal soon, so he traveled for three long days on a crowded bus to spend time with us, fellow members of the One True T.O.P.I. Tribe. 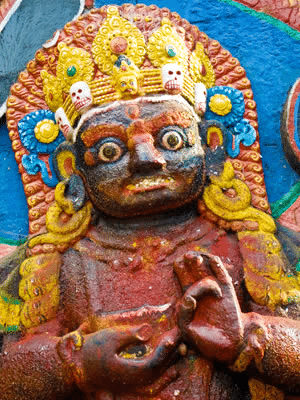 I sometimes call Jason “Dr. Louv” because he deserves a Ph.D. for the wealth of knowledge he has earned in his years of researching theology, mysticism, magick (with a K) and occultism. I asked him to take me around Kathmandu and inform me of the native customs, culture and religion. We spent that entire first day wandering through the colorful streets, smoking harsh Indian cigarettes and talking about the different gods and goddesses. Stopping at random shrines, we performed customary prostrations. Always circling the relics clockwise, shoes off, we dotted our foreheads with red chalk and chanted mantras. Next, we visited Swayambhunath, known to Westerners as the “Monkey Temple.” Legend says that anyone who can run up all 300 steep, stone steps will automatically reach enlightenment. Jason and I valiantly dashed up the mountain, only making it a quarter of the way.

The monkeys and tourists watched us curiously as we heaved for breath and grasped our chests to keep our hearts from exploding. Our lungs were obviously not prepared for the thin air of such extreme elevations. Dr. Louv and I climbed the remaining stairs with stride, “awwing” at the baby monkeys playing around us while we memorialized Lady Jaye and exchanged stories.

Exhausted from our exploration, Jason and I headed to dine with Genesis, who had stayed in bed to recover from the jetlag our flight induced. We planned to meet her at the Third Eye (humorously pronounced “The Turd Eye” by the locals), a restaurant owned by her brother in spirit, a tiny Nepali guru named Trilochan. On our way to meet Gen and Trilo, Jason and I crossed a bridge over a river we dubbed “Dead Dog River.” The dogs of Nepal are skinny and mangy with open sores. They eat trash off the streets and travel in packs. None of them wear collars. We spotted a couple of dead dogs floating past a woman and her children who were brushing their teeth with the dirt-brown water.

Genesis, Jason, Trilochan and I drank chai and feasted on freshly baked naan bread dipped in robust red curries. We made plans to meet the next day at the burning ghats for Lady Jaye’s puja. The ghats are where the Nepalese cremate their dead on wooden pyres and sweep their ashes into the holy Ganges river. Promptly after polishing off our plates we said good night to Trilochan and departed. Rejuvenated from the hot meal and even hotter chai, Jason led us on a detour towards the old royal palace to experience Durbar Square.

It was there, in that bustling plaza amongst the child beggars and babas, that I met Kal Bhairav. I stood in front of the massive statue in awe. Of all the shrines and relics I had seen that day, he was the most profound. He was powerful and bloody with wide, wild, murderous eyes. It made sense why Hindus feared him so. They would come to touch his feet and swear to him. They swore to Kal Bhairav because no one would dare break a promise to such a terror. I exchanged several rupees for a votive candle at a nearby street vendor to place at his feet. I respectfully performed the proper ritual that Jason taught me earlier that day. I stood with my hands fanned out on either side of my face, as I had been told it would help me receive his blessings. Staring into his eyes, I felt an undeniable wave of alien energy. We were connecting, I could feel his power. The sounds of the busy square faded from my awareness. It was just us now, me and the fierce Kal Bhairav.

I was shaken from my trance when Genesis said she was tired and ready to leave. I looked back to see Kal Bhairav disappear as I turned a corner down the narrow dirt road that would lead us back to our hotel. We weaved our way through the crowded street, dodging rusty trucks speeding by. We passed a butcher shop with crimson meat hanging on hooks and I spotted a darling puppy sitting sweetly by her master. Clean and domesticated, wearing a little string collar, she was unlike the other canines I had seen. I locked eyes with the butcher and he nodded with a smile, intuitively giving me the permission I was seeking to interact with the pup. She was quick to get excited over my attention. We playfully barked at each other and danced in the street.

Suddenly, like a machete plunged through my heart, I witnessed as she jumped back just in time to be crushed to her death under the tires of a passing truck. There was a loud “POP,” the sound of her skull compressing under the pressure of the vehicle. Her fur was soaked in blood now and she lay limp and lifeless in the dirt. I was sobbing my “sorries” to the devastated butcher as Jason and Gen dragged me along, eager to leave the scene. 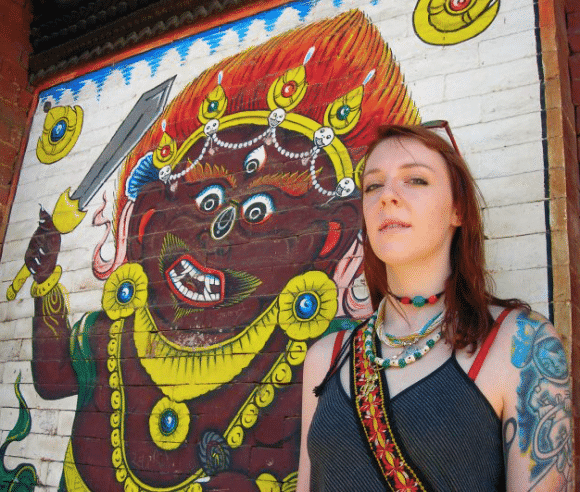 The next day at the burning ghats I stood next to Trilochan as we watched bodies blacken and bubble in the hot flames of their cremation. I briefly mentioned the saddening event of the previous night. Trilochan excitedly told me I had received a very special blessing from Kal Bhairav. He proclaimed the dog had been reincarnated as a human and would save my life one day. My initial skepticism melted away as I watched a burning woman’s arm shoot straight up to the sky. My jaw dropped. I looked at Trilochan with horror and confusion. Why was no one else alarmed that the dead woman had raised her hand? He chuckled and said, “See. She is also being reincarnated higher.”

Weeks later, in a tiny café filled with ancient computers I finally found an internet connection and began researching Kal Bhairav. His stark imagery and supposed blessing were unshakable from my mind. Again, my surroundings faded and I sat in dazed astonishment as I read that Kal Bhairav’s only “vahana,” or vehicle into this world is, in fact, a dog.

Hannah Haddix is an artist and world traveler and has played and toured with the band Psychic TV.