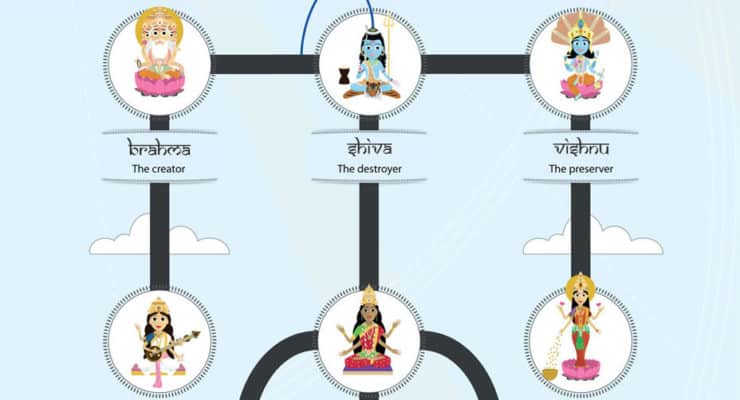 Incredible infographic depicting the major gods and goddesses of Hinduism, arranged into a family tree!

Below, check out a stunning infographic of the 10 major gods and goddesses of Hinduism, followed by the implements and tools they are often depicted with! (For more information on Hindu gods and goddesses, check out this article on “7 Hindu Gods That Will Blow Your Mind.”)

Hindu deities are the gods and goddesses in Hinduism. The terms and epithets for deity within the diverse traditions of Hinduism vary, and include Deva, Devi, Ishvara, Bhagavan and Bhagavathi.

The deities of Hinduism have evolved from the Vedic era (2nd millennium BCE) through the medieval era (1st millennium CE), regionally within Nepal, India and in southeast Asia, and across Hinduism’s diverse traditions. The Hindu deity concept varies from a personal god as in Yoga school of Hindu philosophy, to 33 Vedic deities, to hundreds of Puranics of Hinduism. Illustrations of major deities include Vishnu, Sri (Lakshmi), Shiva, Parvati (Durga), Brahma and Saraswati.

These deities have distinct and complex personalities, yet are often viewed as aspects of the same Ultimate Reality called Brahman. From ancient times, the idea of equivalence has been cherished in Hinduism, in its texts and in early 1st millennium sculpture with concepts such as Harihara (half Shiva, half Vishnu), Ardhanarishvara (half Shiva, half Parvati) or Vaikuntha Kamalaja (half Vishnu, half Lakshmi), with mythologies and temples that feature them together, declaring they are the same. Major deities have inspired their own Hindu traditions, such as Vaishnavism, Shaivism and Shaktism, but with shared mythology, ritual grammar, theosophy, axiology and polycentrism. Some Hindu traditions such as Smartism from mid 1st millennium CE, have included multiple major deities as henotheistic manifestations of Saguna Brahman, and as a means to realizing Nirguna Brahman.

Hindu deities are represented with various icons and anicons, in paintings and sculptures, called Murtis and Pratimas. Some Hindu traditions, such as ancient Charvakas rejected all deities and concept of god or goddess, while 19th-century British colonial era movements such as the Arya Samaj and Brahmo Samaj rejected deities and adopted monotheistic concepts similar to Abrahamic religions. Hindu deities have been adopted in other religions such as Jainism, and in regions outside India such as predominantly Buddhist Thailand and Japan where they continue to be revered in regional temples or arts.

In ancient and medieval era texts of Hinduism, the human body is described as a temple, and deities are described to be parts residing within it, while the Brahman (Absolute Reality, God) is described to be the same, or of similar nature, as the Atman (self, soul), which Hindus believe is eternal and within every living being. Deities in Hinduism are as diverse as its traditions, and a Hindu can choose to be polytheistic, pantheistic, monotheistic, monistic, agnostic, atheistic or humanist.

(Via Captured Nation. For more family trees of deities, check out our posts on family trees for the Greek, Egyptian and Norse pantheons!)

If you truly want to learn more about Hinduism, and about the role of the Hindu gods as sacred guardians of consciousness that yogic practitioners meet along the way to enlightenment through meditation, check out our online course Hardcore Meditation: The 8 Limbs of Raja Yoga. This true, Vedic science of self-realization can improve every single area of your life. It steadily develops your mind and calms your emotions, and ultimately allows you to transcend your ego and experience pure ecstasy. Meditation—or, as it is properly and classically known, raja yoga—is a step-by-step science that predates civilization, and can take us to the stars. If you truly want to meet the Hindu gods, look no further, and begin your meditation practice now.