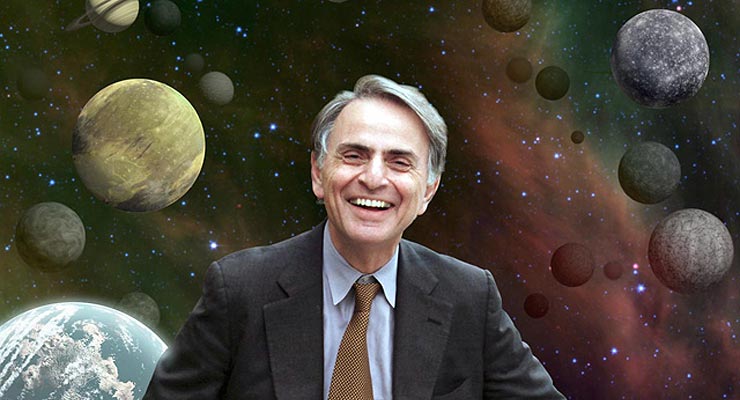 In the video below, from the original Cosmos (not the remake by Neil deGrasse Tyson), Saint Carl Sagan breaks your mind explaining the interaction of 3rd dimensional creatures with 4th dimensional ones.

The concepts Sagan uses here were famously dramatized by Edwin Abbot in the 1894 book Flatland. And then he goes full-on and busts out the hypercube.

vigorously argues against the spread of superstitious and conspiracy thinking spreading through the world (and this was before the Internet blew up, mind you).

On the other hand, he was a massive pothead who loved to obsess over the vast ineffable beauty of the universe.

, made into a movie starring Jodie Foster and Matthew McConaughey, centered around the debate between science and faith; the main plot point of the book was the idea of using mathematics to contact and communicate with alien intelligences, an idea that could easily come from the writings of Aleister Crowley or Robert Anton Wilson.

Science itself, of course, it the child of alchemy; dig a little deeper under the surface, and you’ll quickly discover that the only real difference between science and magick (at least the serious kind) is a difference in language and methodology.

At their core, both methods are about pure curiosity into how the universe works. While the scientist uses empirical methods, the magician or alchemist uses the inner tools of spirit and mind.

As humanity progresses into the 21st century, I hope that we see more scientists with the same child-like wonder of Carl Sagan, and the ability to bring spirituality to the conversation, at least as a moral and ethical framing around the big questions of what humanity should do with its vast technological power.