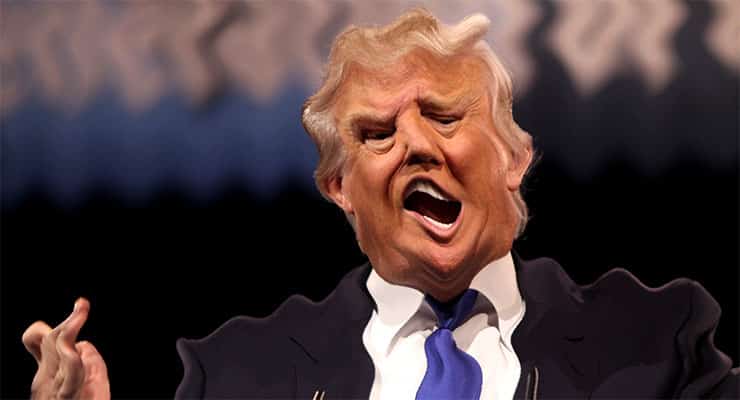 A stoner kid and his friends decide to attend a Donald Trump rally on LSD. The results are even more horrifying than you’d imagine.

Mixing psychedelics and politics worked great for Hunter S. Thompson. For everybody else, it can be a one-way ticket to hell. That’s what Redditor /u/flipper8088 discovered when he and his friends decided to drop LSD before attending a Donald Trump rally as a joke. The trip report from the Donald Trump rally, which is both hilarious and terrifying, reads like a descent through the nine levels of Dante’s Inferno, or a “rowdy cesspool” as he eloquently describes the rally. No sooner does he enter the main hall of the Donald Trump rally than he begins to hallucinate that Trump’s hairpiece is sentient… and it just gets worse from there.

Excellent as not just a trip report but as first-class journalism about what’s really going on with Trump and his supporters.

The report, entitled “Went to a Donald Trump speech on acid SUPER BAD VIBES,” is as follows:

RELATED: You Can Now Buy Ayahuasca on Amazon.com. Merry Christmas!

“It was a stupid idea to begin with honestly. First my friends wanted to go to the Trump rally just for fun even when they don’t support his ideas. Then in the car on the way there one of my friends tells me he just got a hold of some acid and that it would be hilarious to be tripping at a Donald Trump rally, just to say we did it n that it’ll be funny story to look back on. So we all just say fuck it and drop 2 hits each. Bad idea. We walk into the place and just know that something is very wrong. The tension in the air was flowing through our bodies, everyone looked angry about something. 10 minutes pass and we all realize we must escape from this hell on earth before we lose every ounce of sanity we have left. We head for the exits, it’s packed with people and security. WE WONT MAKE IT! We all agree and head back to our seats. (We could’ve made it we were just tripping too hard to be rational) Trump comes out and the whole building starts shaking with chants of USA! USA! USA! It was proud patriotism with an undertone of depraved violence, you could feel it. We all look at each other with the most dreadful look in our eyes knowing we just fucked ourselves into oblivion. I might post the rest of the story later when I have time

“Edit: Rest of story: I put both my arms around my friends and tell them I love them deeply and that we will make it through this experience together, like always. This seemed to reassure my friends a little and it also gave me a sense of comfort that I had 2 trustful companions by my side, even if their minds were being fucked beyond measure at the moment. If anything, genuine trust and unconditional love was the only savior we had left.

“The peak started intensify about 5 minutes (or was it 5 seconds) into his speech. We were sitting on the left side (ground level) about 150 feet away from Mr trump. Got a terrific view of his exquisite hairpiece in person that seemed to have a mind of its own as it was breathing and taking on different forms throughout the whole speech. The visuals were up to par with around 200 ug in my experience, some rare strong street acid, just my luck in this situation. My mind begins to wander as I stop forwarding my conscious attention to his rhetoric and start observing people in the crowd. Started to think about how weird the human race is.

“The woman in front of me had brought 5 of her kids to this rowdy cesspool. All her kids kept glancing and staring at us. One peeked around the corner of his stroller stared straight into my fucking soul for I don’t know how long and then proceeds to point out how big my pupils are. “Mommy, look how big his eyes are. The Mother hears it glances at me with the most heinous expression on her face, she definitely knew.

“I Start paying attention to Trump again and his face starts to subtly melt. The melting intensifies until his face looks like a wax statue thrown into a furnace. I point this out to my friends and they start seeing it. Try holding back laughter on 2 hits of strong acid, it doesn’t work and we burst out laughing while Mr Trump is speaking, he pauses his speech but doesn’t pay us any mind as we cover our mouth quickly. Everyone around us knew we were on something though.

“Protesters in the crowd kept yelling things and were getting dragged out by security. Lol one guy yells ‘TRUMP DID 9/11! open your eyes to the truth’ This is when I realized the opposition is just as idiotic as the supporters. As a country we are digging our own graves. I start to look at myself and fell into a deep state of personal introspection. What was the motive for me taking this action anyway? Why was I here at a trump rally on 2 hits of LSD? Was I searching for some hidden truth by way of chemicals? Or was I here for good fun? I was just as irrational as the others I looked down upon.

“You know how sometimes YOU have ‘moments of eternity’ on LSD. Yeah well that was happening all night, the speech felt like it kept looping over and over and over and over and over. Muslims this, guns this, illegals that, something about Hilary Clinton being disgusting by using the restroom. Then every 5 minutes after a bold statement, the crowd erupts into mindless cheers and applause. Endless time loop. This when I actually convinced myself that I was living out the novel 1984. I genuinely believed this. Trump was big brother HOLY SHIT AN EPIPHANY. TRUMP IS BIG BROTHER. Yeah this when the trip started to take a bad turn again but wait a miracle. THE LOOP IS OVER. WE’RE SAVED. THE DEVIL IS DONE WITH HIS RHETORIC. The speech was over. we can get out of this zoo now. We figure we’re all too fucked up to drive so we call someone to pick us up. After that we had a deep discussion about politics, America, Philosophy, Trumps hairpiece and how incredibly idiotic we are.”

What an absolutely horrifying report from a Donald Trump rally. And to think, it might have been way worse sober.