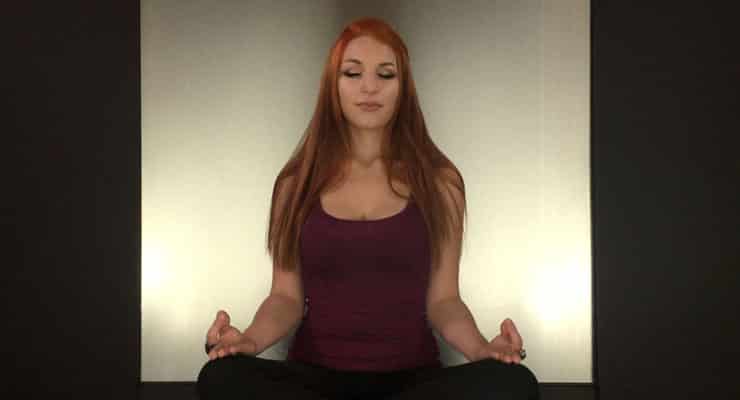 Here’s a 4K instructional video on how to meditate, and start radically transforming every single area of your life—and even supercharging your brain!

Here’s a short video introduction I recorded on how to meditate, and start mastering the art and science of meditation—and therefore start supercharging your life.

Meditation is the core, master skill of life. It’s a way of disentangling the chaos of the mind and understanding something very critical: That the turbulence in your life is almost always self-created, and therefore can easily be self-resolved.

Meditation is, of course, also the primary skill necessary for practicing effective magick. If you’re interested in the material here, why not explore further and learn how to meditate by taking our course on Hardcore Meditation?

(Thanks to model Kat Handler, Thomas Negovan and Century Guild for help with the video!)

Below, check out research by Ultraculture contributor Daniel Appel on the 4 ways that meditation can actually positively alter and even supercharge your brain (as if you needed any more reasons to learn how to meditate!).

4 Ways Meditation Can Positively Change Your Brain: The collaboration between Western science and Eastern traditions of meditation has led to incredible insight into the ways meditation can alter the physiology of the brain.

The blending of a community of neuroscientists, Eastern and Western meditators, and Buddhist scholars is forming the new field of Contemplative Science. This emerging area of research applies the scientific method and advanced neuroimaging techniques in combination with various meditation traditions. This collaboration has led to incredible insight into the changes that occur in the brain from meditation. 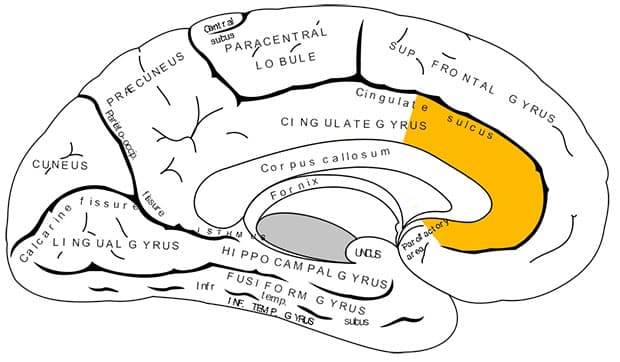 A 2012 study examined white matter density in people just learning how to meditate throughout the course of their program compared with a control group who practiced a simple relaxation exercise. They utilized diffusion tensor imaging, a form of MRI that measures the movement of water in the brain.

Within four weeks of learning how to meditate, distinct changes in white matter were visible. These changes were associated strongly with the anterior cingulate cortex, a brain region involved in rational cognition, reward anticipation, decision making, empathy, impulse control, and emotion. 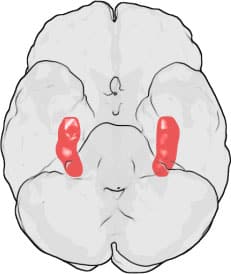 A 2011 study examining Mindfulness Based Stress Reduction (MBSR) found that participants experienced an increase in grey matter density in the left hippocampus over the course of the program. MBSR uses Buddhist-inspired mindfulness meditation principles to relieve stress and promote inner peace. It is especially helpful in the treatment of Post-Traumatic Stress and Anxiety disorders.

The Left Hippocampus is strongly involved in processing new, learned information and filing memories. Stress often results from strong emotional attachments to painful memories, so by improving the efficiency of the hippocampus, emotional memories may be processed and stored more readily.

Another study utilized MBSR in a population of newly diagnosed Alzheimer’s patients. Participants were randomized in an MBSR group and a control group that received standard care. All participants underwent an fMRI at the beginning and end of the 8 week study to measure changes.

The MBSR group showed significantly less atrophy in the hippocampus than the control group. The MBSR group also showed improved function in the default mode network, a system that is activated when people recall past events or think of the future. 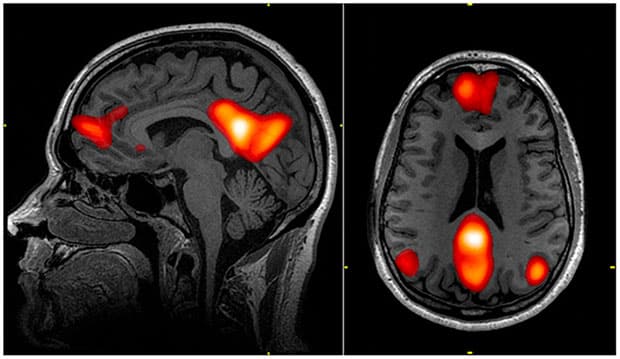 A study by Richard J. Davidson examined highly experienced Metta (compassion) based meditation practitioners using EEG to record the surface activity of the brain. The baseline pattern of electrical activity in the meditators was distinct, possessing a unique signature compared to the non-meditators. Differences in gamma activity and gamma synchronization also occurred during meditative states.

Davidson theorizes that increased activity in the Insula, Tempro-Parietal Junction, and Amygdala increase the practitioner’s ability to see things from another’s perspective. Other studies have linked Metta to improvements in processing stress, boosted immune function, and reduced inflammation. Metta may be a highly effective prevention tool for depression, heart disease, and diabetes.

4. Meditation may slow the cognitive decline of aging.

A 2011 study examined 27 experienced meditators and 27 control participants. Neuroimaging found the meditators had significantly denser, more coherent tracts of white matter. This allows electrical signals to travel quickly and efficiently throughout the brain. 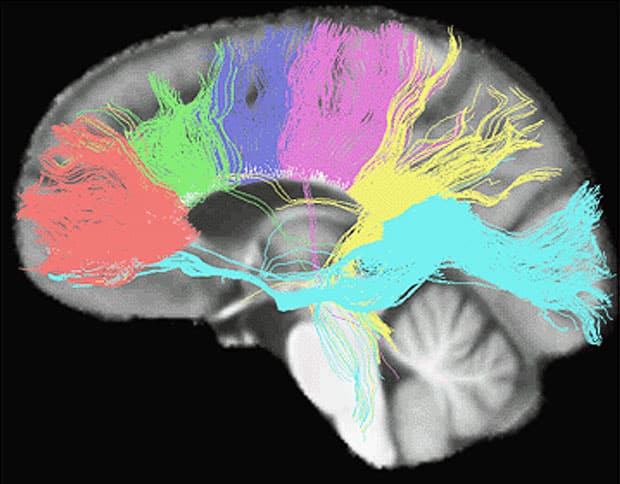 The greatest changes were seen in far-reaching connections. Areas with the most distinct differences were the superior longitudinal fasciculus, which connects the front and back of the cerebrum, the corticospinal tract, which travel from the front of the brain to the spinal cord, and the uncinate fasciculus, which connects parts of the limbic system vital to emotional functioning.

New research shows that learning how to meditate and keeping at it regularly slows the natural loss of brain tissue that begins around age 30. Contemplative practice could be the key to maintaining a healthy mind throughout the ever-lengthening human lifespan.

Recent studies conducted at UCLA have identified meditation as a possible intervention to slow the degradation of brain tissue that occurs with age. The use of mindfulness-based meditation as a preventative practice could revolutionize our understanding of the aging brain and provide tools for all individuals to realize an entry into older adulthood with clarity, independence, and satisfaction.

Scientists at UCLA conducted multiple studies examining the weight and volume of white matter and grey matter in the brains of participants. Half of the participants possessed significant experience with mediation (between 4 and 46 years), while the other half were new to meditation. Though both groups still showed some decline, researchers observed significantly less loss of both grey and white matter associated with age in the group of experienced meditators.

The researchers expected small, localized results, but were surprised when they observed widespread differences in the neuroanatomy of meditators. According to Hebbian theory, repeated activation of neurons in tandem increases their strength and density and facilitates new connections. In other words, “neurons that fire together, wire together.” If meditation practices stimulate widespread activity across multiple brain regions, that could strengthen the neural network and explain both the physical and psychological differences among meditators and non-meditators. Similar studies have already demonstrated this effect from music, which also seems to cultivate widespread activation throughout the brain.

Check out our online course on Hardcore Meditation!

Most recent research regarding treatment of age-related cognitive decline examines pharmaceuticals and interventions applied after symptoms have already emerged. New research, like UCLA’s meditation studies, supports the emerging trend in Western medical thought that simple, decision-oriented preventative practices can be more effective than the “traditional” approach of waiting for an illness to occur before attempting to treat it. Many Eastern philosophical and medical movements have acknowledged the benefits of this approach for thousands of years, but only recently have these sentiments began to seep into the Western cultures that thus far prefer the idea of medicine as a quick fix to counterbalance unhealthy choices.

Grey matter is composed of neurons, brain cells that send and receive the electro-chemical signals. The activity of neurons facilitates everything from critical thinking and memory to the senses to heartbeat and respiration. White matter contains nerve fibers and myelin, the structure and insulation across which the electro-chemical signals may travel. A great deal of the cognitive deterioration associated with aging may be rooted in the loss of grey and white matter. Forms of dementia, depression and psychosis associated with advanced age also correlate to this natural decline. Mindfulness-based meditation practice may be the key to maintaining a healthy, functional brain in this era of expanding lifespans.

As humans age, the brain undergoes perpetual change. Some changes correspond to milestones in development. For example, new patterns of activity emerge around five years that enable long term storage of information in the form of explicit memory. This explains the difficulty most people have forming memories from infancy. In the early teenage years, the brain begins the process of puberty marked by distinct changes in hormones and increased connections in the prefrontal cortex, the brain region associated with executive function, risk-reward evaluation and other complex, high level forms of cognition. During middle age, the human brain begins to lose mass. Over time, this gradual loss of mass can contribute to the cognitive decline associated with the aging brain.

(In the video above, David Lynch discussed the profound effect that meditation has had not only on his spiritual life and happiness, but on his artistic ability—comparing meditation to a process of dipping into the primordial ocean of wisdom and creativity available in the universe and coming back with fresh information to turn into art.)

Until recently, it was assumed that the brain solidifies after puberty. If this were true, it would prevent the possibility of further neuro-anatomical development throughout life. This translates to the misconstrued idea of personality as a concrete, permanent aspect of an individual rather than an ever-changing, immaterial model or construct. We interpret ourselves and our situations continuously, incorporating new information into maps, concepts and schemes constructed as the brain’s way of representing and navigating reality. Advances in the understanding of brain plasticity now lead many researchers to believe that the reality of the brain is always changing. It is possible that every piece of learned information, every thought, every action causes Hebbian anatomical changes in the brain as it ripples through consciousness. In this context, meditation could be a paradigm of introspective alchemy that will allow individuals the freedom to choose how they would like to develop, interpreting and adjusting aspects of personality, interpretation and experience that emerge from the brain’s relationship with the sensory world.

It’s clear that there is a relationship between thought and the physical health of the brain. In an increasingly complex world, the idea of cultivating beneficial thoughts and observing and understanding even the darkest corners of the mind can seem frightening or impossible. Like any new skill, learning how to meditate takes time and practice to become natural as the brain becomes accustomed to a new set of parameters and forms new connections between neurons. With repetition, these patterns of thought and structure become second nature, like a neurological software upgrade.

Just as scientists are turning to Eastern traditions for a deeper understanding of the mind, individuals can now access tremendous sources of information regarding healing contemplative practices. Life expectancy is increasing rapidly as technology accelerates. In the next century, human beings will likely begin to live well beyond 100 years, and meditation will become a vital part of daily life.

Ready to Learn How to Meditate for Real?

Meditation can improve every single area of your life, sustainably, for your entire life. It steadily develops your mind and calms your emotions, and ultimately allows you to transcend your ego and experience pure ecstasy.

That’s why Ultraculture created a step-by-step course on Hardcore Meditation, to teach students how to meditate the real way.

Meditation—or, as it is properly and classically known, raja yoga—is a step-by-step science that predates civilization, and can take us to the stars.

But it’s not as easy to learn as you might think. The “meditation” and “yoga” that are sold in the open market are, frankly, watered-down or even fantasy versions of the true raja yoga.

Meditation means controlling the body, breath and mind, progressing to awakening the subtle energy currents in the body and ultimately extinguishing the individual ego in silent bliss. The payoff is the greatest possible reward within a human life.

(Plus, with some practice, you’ll be able to get high whenever you like, without drugs, for free, forever.)

What could possibly be better? Blast off and start meditating now!