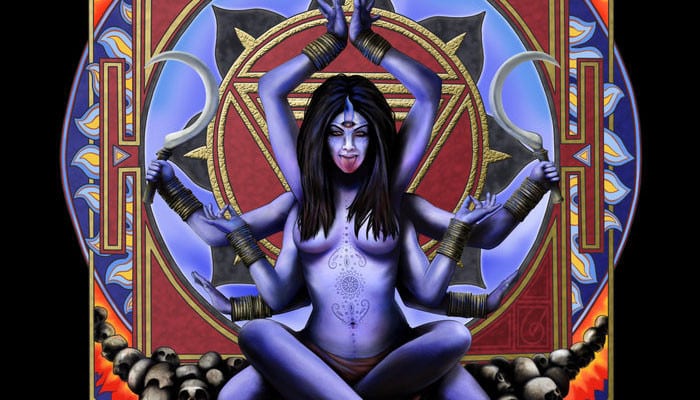 Understanding and embracing Kālī Ma, the Dark Mother, the destroyer of the ego, and the primary goddess of India and the Vedic traditions.

Beyond time is the love of Kālī Ma, the mother.

Listen: Time eats. It destroys. Time disintegrates everything that lives within it. It whirls its constant wheel of Create – Preserve – Destroy. All that has been becomes compost for all that will be. Nothing escapes this cycle of impermanence. It is a Law of Nature. 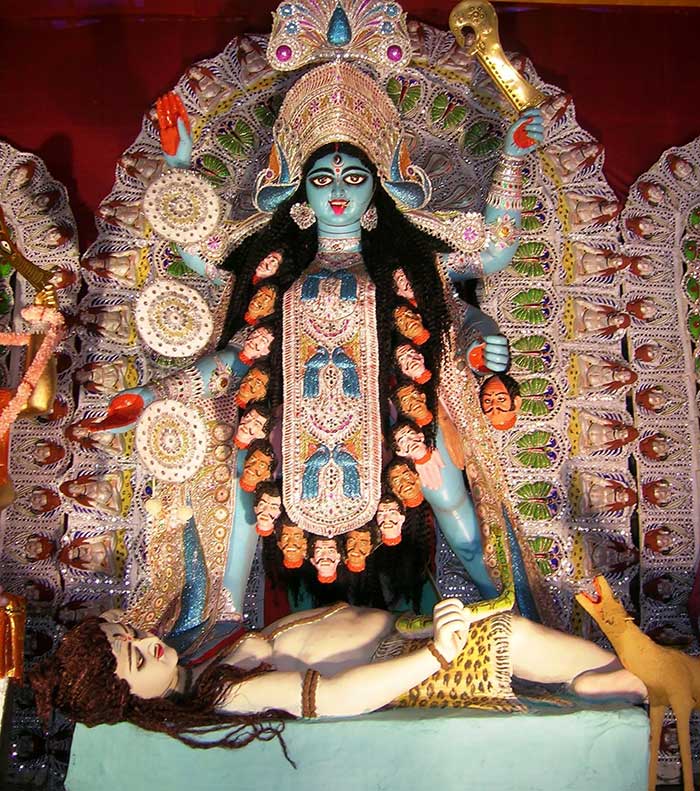 Kālī Ma is the most wrathful aspect of the goddess. She brandishes a bloody sword in one of her many arms, and with her frenzied tongue lolling from her mouth in ecstasy she stands upon the beheaded corpse of Shiva, holding his severed head aloft. It is hardly her first kill: Her blue body is crossed with a bandolier made of the heads of demons and men.

The message is clear. Time destroys everything. It destroys all mortals. It even destroys all gods. Everything is subject to impermanence and change—even the gods themselves.

Yet look beyond this fearsome image. Kālī is the Goddess in her purest aspect, her highest register. The Creatrix and Annihilator of manifestation. The Divine Mother, presiding over both Birth and Death.

Approach Without Fear, For All You See is Your Own Mind 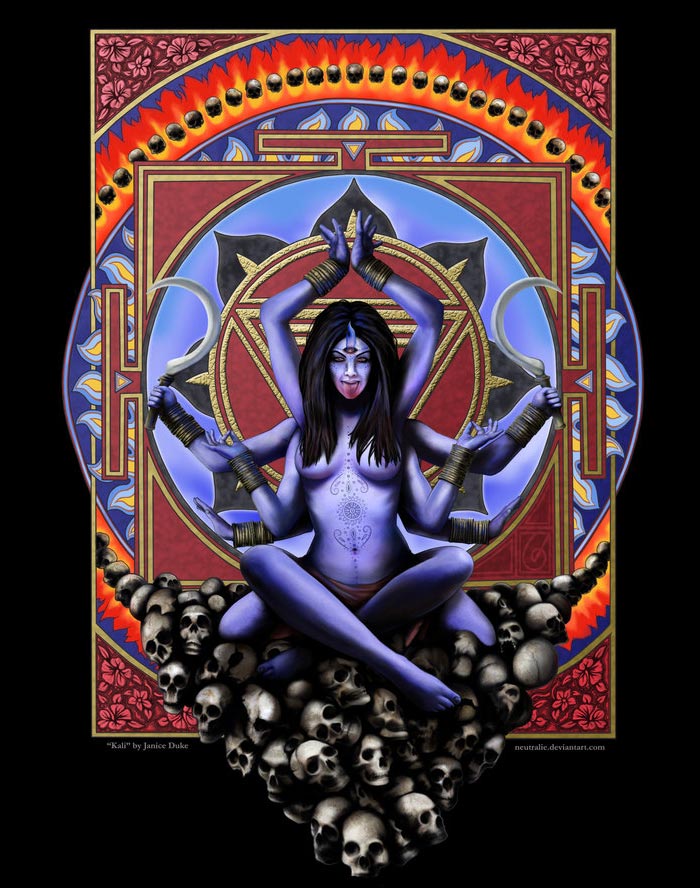 Ramakrishna, history’s most prominent devotee of Kālī, saw the goddess as the portal to Ultimate Reality:

“And, indeed, he soon discovered what a strange Goddess he had chosen to serve. He became gradually enmeshed in the web of Her all-pervading presence. To the ignorant She is, to be sure, the image of destruction; but he found in Her the benign, all-loving Mother. Her neck is encircled with a garland of heads, and Her waist with a girdle of human arms, and two of Her hands hold weapons of death, and Her eyes dart a glance of fire; but, strangely enough, Ramakrishna felt in Her breath the soothing touch of tender love and saw in Her the Seed of Immortality. She stands on the bosom of Her Consort, Siva; it is because She is the Sakti, the Power, inseparable from the Absolute. She is surrounded by jackals and other unholy creatures, the denizens of the cremation ground. But is not the Ultimate Reality above holiness and unholiness? She appears to be reeling under the spell of wine. But who would create this mad world unless under the influence of a divine drunkenness? She is the highest symbol of all the forces of nature, the synthesis of their antinomies, the Ultimate Divine in the form of woman. She now became to Sri Ramakrishna the only Reality, and the world became an unsubstantial shadow. Into Her worship he poured his soul. Before him She stood as the transparent portal to the shrine of Ineffable Reality.” (From The Gospel of Sri Ramakrishna.)

This is the vision of Kālī as she is, as she manifests to those who approach her without fear.

Kālī Ma as the Ultimate Feminist 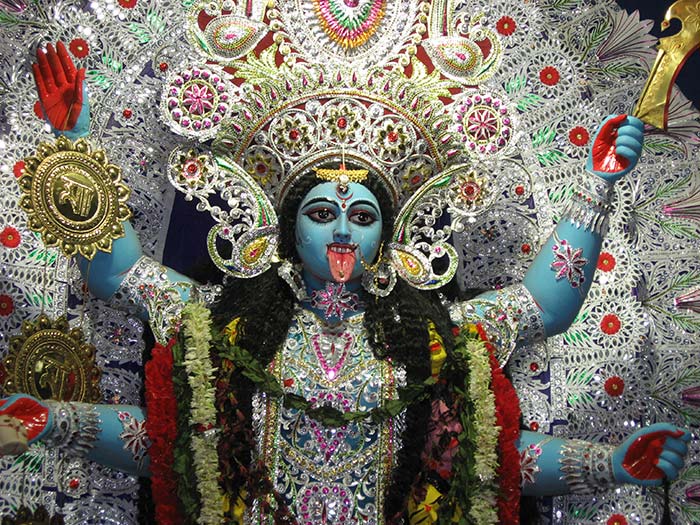 Kālī has become a prominent symbol in the West. She has come to represent female power, wrath, and the psychic force of menstruation. Menstruation is indeed deeply connected to the cycles of Time; it represents the cyclic force of destruction that precedes fertility. (Why do you think so many Hindu and Tibetan goddesses feature red coloring or imagery, or are worshipped with red powders and pastes?) Lunar cycles, agricultural cycles, menstrual cycles… expand outward as the cyclic nature of reality itself. This core truth may shock and appall mainstream Hindus, but for Tantrikas of the Left-Hand Path (that of sex and sorcery), it is reality itself.

There is No Such Thing as a Kālī Yuga 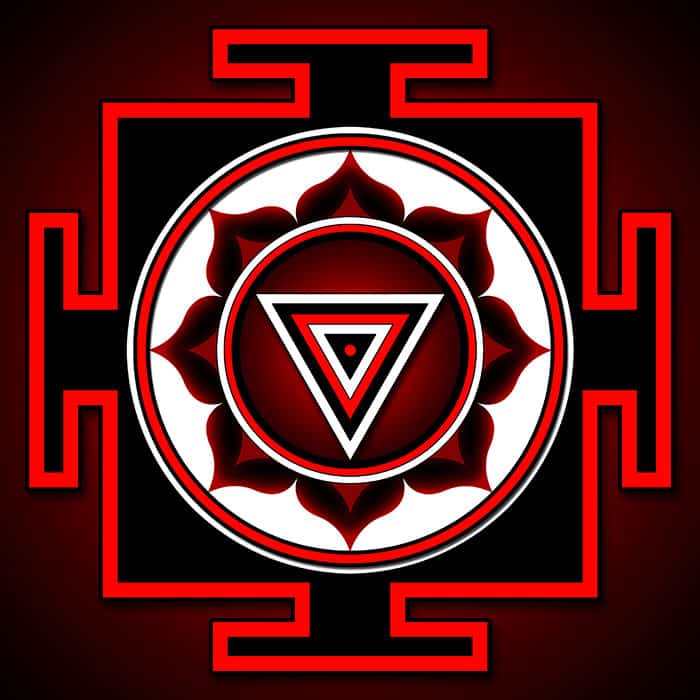 But let us get one thing very clear.

Hinduism speaks of a Kali Yuga, a time of universal darkness in which humanity reaches its nadir—in which mankind’s spiritual degradation is complete. When people live in hovels, drink dirty water, eat dirty food, and have so lost their true sight that all they can see to worship are demons.

This is an actual concept in Hinduism. However (here’s where translation issues become quite important): This is the Kali Yuga, not the Kālī Yuga. Kali is a demon. Kālī is the Ultimate Goddess. They are not the same being.

The confusion of Kali and Kālī has been perpetuated by Western writers like Dan Simmons, who conflated the two in his popular horror novel Song of Kali

. Much more damagingly, fascist occultists like Julius Evola have used the idea of a Kali Yuga as a call for reactionary, nationalist politics—suggesting that because “we live in the Kali Yuga,” we must go backwards and return to an earlier, more pristine time (a common conservative idea)—even back to monarchy and feudalism.

There’s more than a few glaring problems with this, but the biggest one of all is that we’re not actually in the Kali Yuga, and haven’t been since 1750. According to Hindu authorities like Sri Yukteswar

, the guru of Paramahansa Yogananda, we’re actually living in the Dvapara Yuga—on an ascending curve out of the darkness of the Kali Yuga, in which interest in human liberty, equality and spiritual freedom again become prominent. A time in which we’re still nowhere close to a perfect world, but in which we are in a constructive cycle towards perfection instead of an entropic cycle away from it. Compare the incredible advances in freedom and technology since 1750 with the Medieval misery that came before, and I think you’ll probably agree.

Kālī is not a symbol of darkness. Let us separate her completely from this ignorant muddle of Western misunderstandings and misappropriations.

When considering Hindu ideas, it’s crucial to examine them from at least two angles: The mythology, and the temporal manifestation.

Where can you see, feel or hear Kālī Ma in manifestation in your own life?

Related Content: 7 Hindu Gods That Will Blow Your Mind

Related Content: Here’s an Awesome Map of the Gods and Goddesses of Hinduism