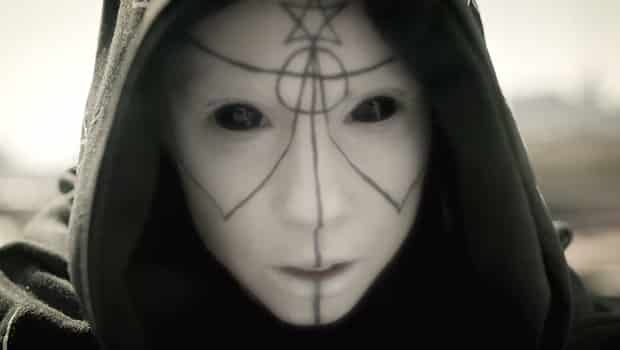 On Die Antwoord’s “Pitbull Terrier,” the social pressure to keep mankind’s animal nature on the leash, and why you feel like the world is trying to control you all the time

Embedded below is the video for Die Antwoord’s Pitbull Terrier, the first single from their self-released DONKER MAG album. It’s great: While it may not break aesthetic ground for the band, it’s a solid song, a solid video—and most of all, an impressive effort now that the band has left the clutches of Interscope Records and taken over releasing their own material. To my mind at least, that’s a crucial strategy for any artist of any kind, working in any media.

Die Antwoord’s video combines the usual thematic elements drawn from South African art and cinema; there’s also an undercurrent of comic book imagery—the video as a whole reminds me of 2000 AD comics, specifically the work of Simon Bisley, who’s referenced directly in the Lobo jacket that Ninja wears in the video, you can watch it here.

Like the video for Brooke Candy’s Opulence, which I wrote about at length, Pitbull Terrier hits one of my favorite themes: the manipulation or even redemption of mankind’s lower aspects, in this case via occult symbology. But unlike Opulence, Pitbull Terrier goes for a much deeper level than the psychological shadow (which is the by-product of the conscious and linguistic mind) and goes straight for the primal, animal nature of human beings.

(And no, Ultraculture isn’t turning into Vigilant Citizen. I know too much to be paranoid.) 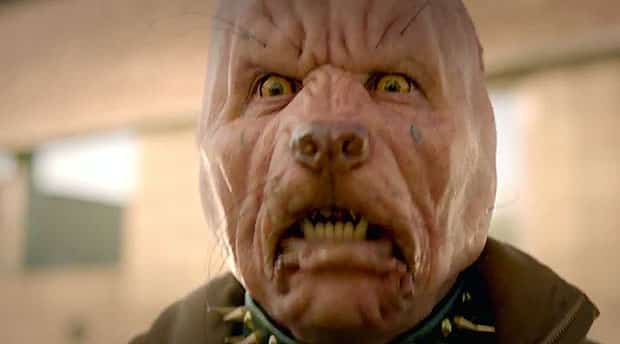 Man is the Animal

To quickly recap Die Antwoord’s video: Ninja is a pitbull man, being led around on a chain by a kid with devil horns. He gets off the leash, kills an asshole on a cell phone, chases two women dressed as black and white cats, and is then hypnotized, killed and finally resurrected by Yolandi, who is covered with chaos magick-style sigils.

In short: In Die Antwoord’s Pitbull Terrier video, Ninja represents mankind’s animal side (and, as symbolized in the form of the devil kid, an animal side led only by its basest impulses), chomping at the bit of repression and completely uncontrollable. The only way to control him (and really, the only way the animal masses of humanity are controlled) is by hypnosis and symbols. In this way, mankind’s animal side can be “initiated”—symbolically slain and resurrected, as in the myth of Isis and Osiris—and redeemed into an at least halfway-human state.

Put more simply: We live in a rational, ordered society. But most human beings are not rational or ordered. Most human beings are closer to Ninja’s pitbull. And so society spends a lot of time using symbols and hypnosis to keep the masses in check. Whether you’re in moral agreement with this or not, it’s what drives most of the world you see around you. 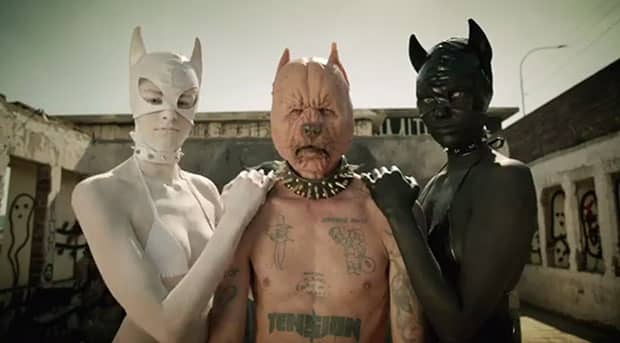 To broadly generalize, a lot of Western political and religious history has worked on the assumption that mankind is innately animalistic, and that this is not good. That human beings need both political control and religious redemption in order to rise above their base natures. Enlightenment and Romantic thinkers, from who we inherit most of our current thinking, and certainly the ideas expressed by popular music, turned this on its head and worshipped the idea of the “noble savage”—the idea that humans are both innately good and innately animal, and that this is actually a desirable state. Some of this was probably prompted by contact with native tribes after the opening of the New World, and the slow realization (a lot of which, remember, was likely imagined or projected, because people were reading second-hand reports in slow drips) that native people, compared to the disgusting, diseased, plagued filth of “civilized” Europe, probably had it a lot better—at least until Europe’s corruption, in the form of genocide and smallpox, caught up with them.

Much of the Christian thinking that underpins the last 2,000 years paints a picture of mankind as an essentially pure being that fell through Original Sin into the prison of flesh, nature and animality (sex), but that can be redeemed through Divine Grace. This was elegantly put by the Christian writer C. S. Lewis thusly: “Humans are amphibians—half spirit and half animal. As spirits they belong to the eternal world, but as animals they inhabit time.”

This is important, because it sets up human beings in a war against themselves. That’s not unique to Christianity—it’s a common trope of the religious forms that were perpetuated in the last two millennia. Muslims engage in jihad against the lower self (importantly, this is the original meaning of the term); Buddhists work consistently at the total goal of overcoming the mind. We can trace this divided-man line of thinking through the Enlightenment, into the cult of reason and scientism, and all the way up to transhumanism, the logical outcome, where we now have people trying to literally overcome death and even implant f*king cell phones in their arms. Regardless of outer form, the basic impulse is the same: nature and flesh are enemies to be defeated.

But don’t forget—all of these religions were colonizer religions. They emerged out of earlier forms of belief that generally placed a lot less emphasis, or no emphasis, on individual human beings, instead leaning more toward narratives in which mankind was a subject of nature or tribe. In the case of most of Europe, Christianity was a transplant on a previous pagan culture that probably had quite a bit in common with the Hinduism that the Buddha came to reform.

This earlier Indo-European pagan sensibility was perhaps most clearly expressed by the late Jhonn Balance in an interview with Fortean Times thusly: “I’m an animal, I’ve never been a human—there’s no difference between animals and humans to me. I think that’s one of the signs of a true pagan.” 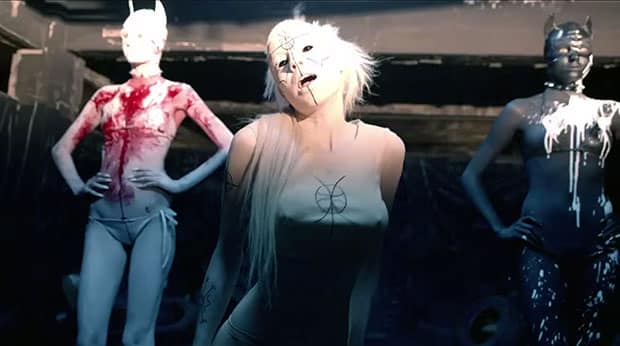 “Religion is the masterpiece of the art of animal training, for it trains people as to how they shall think.” – Schopenhauer

Now, with that somewhat lengthy preamble out of the way, let’s fast-forward to modern civilization, 2014.

Regardless of where you stand on the matter/spirit debate, modern civilization does NOT like mankind’s animal nature. It is caught in a constant battle between regressive animality and basic human decency. And we’re not talking about Rousseau’s “noble savage”—we’re talking about animality as in what you get when you Google “meth horror stories.”

To understand how much effort we put into suppressing the animal, consider Die Antwoord’s Yolandi as representing our higher nature. Like a representative of an alien species in a foreign land, attempting to communicate with the brutes that are humanity, she’s put in the position of having to communicate with a less advanced life form without the benefit of a mutual language.

Yolandi shows up right after Ninja corners the two cats—one black, one white. Anybody with even a cursory understanding of the Tarot (or music video imagery, which constantly uses this trope) will recognize the symbology of the High Priestess, who is the ultimate Initiatrix into the Mysteries, and who stands between two pillars, black and white. 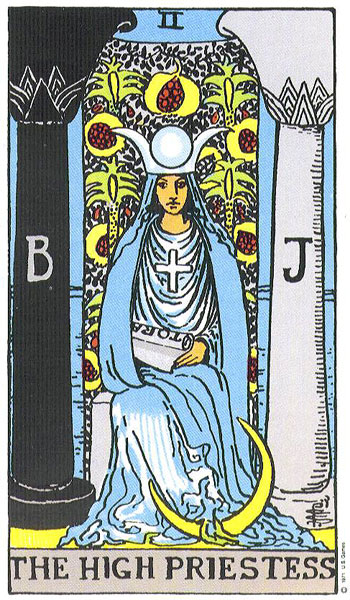 (As a sidenote, it is pretty obvious that Die Antwoord are legitimately into magick (you can read about how Die Antwoord and other celebrities are into magick here). They reference it pretty regularly on social media; their late collaborator Leon Botha was a full on Hermeticist; and their pre-Die Antwoord video “The Way of the Dassie” betrays a pretty earnest spirituality as well as what I take to be an advanced understanding of Eastern spiritual practice. I saw them live a couple years ago, it was what I can only describe as a profoundly awakening, even spiritual experience, a direct transmission from real artists that their videos and flashy presentation don’t fully represent or really even prepare you for.)

Symbols are the language of the unconscious. The unconscious doesn’t process language, at least not like the conscious mind does; language is way too complex and abstract.

What we witness in this scene can be seen as a depiction of how the occult process works: The conscious mind communicates with the unconscious, animal self using symbols in order to leash and restrain the pitbull terrier of the lower man, the id that will run hog-wild fucking and killing everything in sight if it’s not conditioned and constrained by the civilized self.

Now, this process, like it or not, is the hallmark of civilization and of civilized beings—they’re able to repress their lower desires, and therefore are able to function as members of society. Politics and religion have traditionally provided forms to do this, as we discussed above. This makes civilization—and all its accompanying neuroses, which ironically stem from that repression—possible.

Advanced beings are able to yoke and restrain their own lower natures without waiting for any external agency to do it for them. But—and let’s just come out and say this—for most humans, self-discipline is impossible. So civilization is put in the position of having to do it for people.

Take at look at everything being beamed at you by corporate media and advertising, and you’ll essentially see the same two things that Yolandi hypnotizes Ninja with in Die Antwoord’s video: Sex and Symbols.

The entire media landscape we swim through is designed to hypnotize and subdue our lower selves. 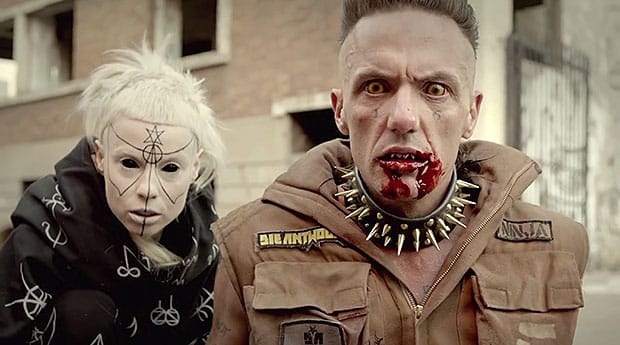 Nature is a Language—Can’t You Read?

“There’s nothing funnier than the human animal.” –Walt Disney

Now, whether you think this is a good idea or not will largely depend on where you stand in the philosophical debate summarized in the Theology as Batrachology section.

But that’s how it is. Society seems peaceful because it generally (except in the case of police corruption) saves the lash only for those whose inner animals prove impossible to hypnotize. The rest of us watch Netflix in the dark as we slide into sleep, caught in a dreamcatcher of logos, celebrities, fashion magazines, free pornography and intoxicants—all of which now fulfill the same symbolic function once occupied by religion.

Now, before you start getting all “OMG kill the Illuminati,” understand this: This is the current of evolution. All of the positions mentioned in Theology as Batrachology are true, just at different points of the spectrum, which individuals maintain different positions within. Mankind evolves from animal to man to god-man, as spiritual adepts like the Sufi master Meher Baba assure us. We are all faced with daily decisions to evolve or devolve. Most remain unconscious of the process, and so are dragged by society. And the dragging goes quick: Consider that when we groan about public stupidity these days we’re generally talking about people sharing Justin Beiber clips instead of, for instance, gathering around public lynchings. Mankind’s animal nature doesn’t change, but the general social context forces outright barbarity more and more into the margins.

There is only one truly effective way to deal with the pressure of evolutionary force: Go with the current and discipline yourself. It is only when you yoke your own mind and body through self-discipline that the social pressure to do it for you lessens.

The other option is total paganism: Completely reject civilization and regress into animality. This would be embracing pre-civilization instead of post-civilization. It’s an option, but bear in mind it’s the one that goes most against the current of modern life. I would be remiss not to present it as a theologically valid position; however, don’t expect a rose garden.