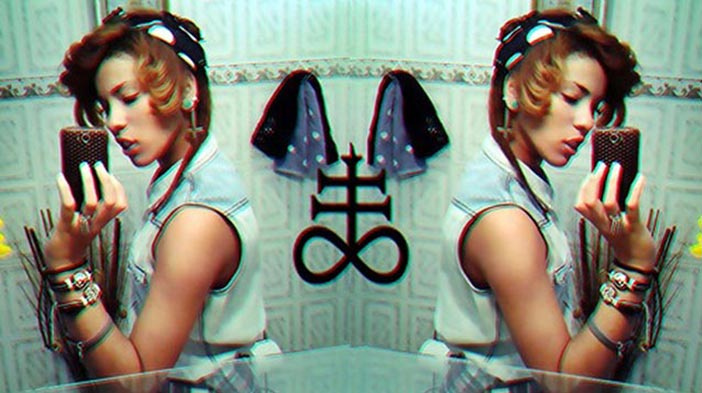 Sex magick is the art of harnessing the raw altered states of consciousness generated by sexuality to direct your unconscious mind towards manifesting your goals. Here’s how to do it.

So. Sex magick. This will likely be remedial information for most of you but it never hurts to drag out the classics for another look. Some basics:

1. Your Conscious Mind is a Chatterbox That Always Gets in the Way.

You want some stuff. You really, really want some stuff. You might want a better job, a better place to live, a better relationship. Or maybe you want some kind of deep spiritual fulfillment. But you never get these things. Why? Because your mind is a chatterbox that always gets in the way. It’s a bundle of disjointed, attention-deficient thoughts that go in every direction, all the time. It’s scattered and dispersed and instead of a mighty river flowing in one direction it’s a bunch of channels and creeks spidering all over the place and dispersing its energy everywhere. Your thoughts are contradictory, self-defeating and by and large wasted and useless. You lack focus.

2. Your Unconscious Mind is a “Magical” Powerhouse.

3. Your Unconscious Does Not Speak Your Language. It Speaks in Symbols.

Corporations use logos for a very specific reason: They bypass your conscious filter and go directly into your unconscious. Your unconscious speaks Symbolese. This is why your dreams are full of bizarre and symbolic images and events. If you want to rewire your unconscious, you need to rewire it with symbols.

4. Your Unconscious Becomes Vulnerable to Reprogramming When in Altered States of Consciousness.

Monks of various religious traditions meditate for decades to quieten their thoughts, and it’s likely that they achieve long-term, permanent brain change which produces deep happiness in a way that no other human activity can.

But if you want to cut straight to the chase, you can produce altered states in many other key ways. People around the world have used drumming, dancing, over-breathing, fasting, sleeplessness, pain and dozens of other techniques to shock the nervous system out of the trance of daily reality. Sex is one of the best and most entertaining methods.

5. So: To Reprogram Yourself, Get Into an Altered State of Consciousness and Then Focus on a Symbol That Represents What You Want to Happen.

Here’s how to make said symbol, or “sigil”:

– First, decide what you want to happen. For instance: “I want to meet my soulmate” or “I want a new job.”

– Take out the vowels from your sentence. “I want to meet my soulmate” becomes “WNTTMTMSLMT”

– Take out the repeating letters. Now you should have something like “WNTMSL”

– Now take these letters and arrange them into a symbol:

– Take the symbol and start playing with it, designing it and simplifying it down until you have something that looks suitably magical. What you’re doing here, by the way, is creating a symbol which is still linked to your intent in your unconscious, but which doesn’t directly suggest its meaning.

6. Forget What You Wanted in the First Place.

Take your sigil and put it somewhere safe for a couple weeks. Long enough that you forget what the original intent behind it was—out of sight, out of mind. Your unconscious will remember. Your conscious mind will not. And because your conscious mind won’t remember what it was you wanted, it won’t be able to nitpick, second-guess, out-smart or otherwise tell you why you shouldn’t or can’t have the thing you want. It won’t be able to interrupt the pure Will of your unconscious self.

Starting to see how sex magick works? There’s nothing really “magick” or “occult” about it. It’s just a backdoor into your own nervous system. A way to trick yourself into getting out of your own way.

Once you’ve constructed your sigil and forgotten what it was for, now comes the fun part: Engineering the break in consciousness. You can take any of the steps above but the simplest way to do it is sexual overload, either alone or with a partner. Get into the orgasmic state by whatever means seem best, and at the moment of orgasm, stare unflinchingly at your sigil, imprinting it deep into your mind.

That’s it. Now destroy the physical basis of the sigil, go do something else and forget anything ever happened. There: You just performed sex magick. Give yourself a hand!

Such methods of “reality hacking” are tried and true and effective at hedging the stream of your life towards the outcome you desire within the bounds of your circumstances—meaning, they can help steer you through reality and shape what you think of as “fate.”