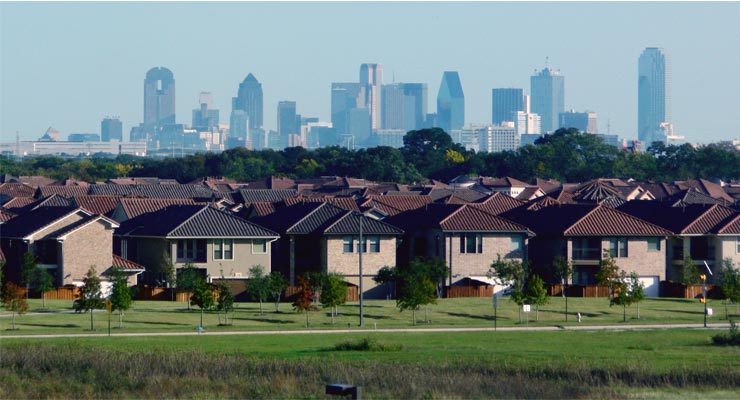 The American middle class is painfully wedged between recovering from the subprime mortgage crisis and preparing for the end of oil. What does that mean for the future of the suburban dream… and does it even have a future?

Ever watched Blade Runner and wondered, “If this is what Downtown LA looks like in 2019, what will the San Fernando Valley be like?” As we rapidly approach an uncertain and possibly dystopian future, we can forecast with near certainty that our major metropolitan areas will transform into corporate-controlled technocratic police states—after all, just look at present day New York City. But what about the suburban dream, the Mecca of the bourgeois middle class who consume the waste of the urban elite?

The suburbs are where the desires drafted on Madison Avenue are sold as manifest consumer realities. The suburbs were meant to be the place where the American Dream could nest and take root: where you could buy a low-cost single-family home in a safe and quiet town and commute to work in the big city. But the housing crisis of the ’00s destabilized the foundation on which the suburbs rested, and the looming reality of Peak Oil leaves their future in an uncertain state. What will the American Dream look like when it has been kicked out of house and home and run out of gas? What comes after the suburbs? 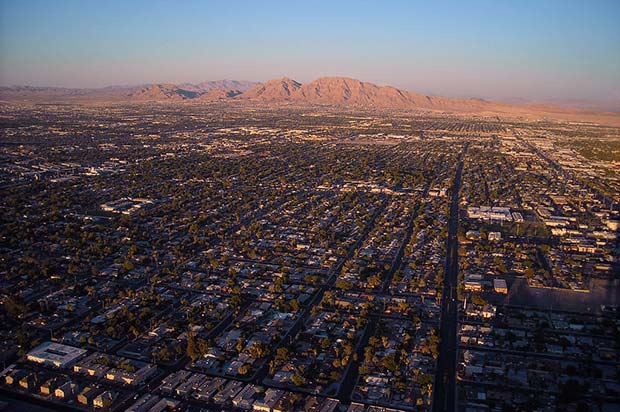 The concept of the suburb was born during the 19th century, as an alternative to urban dwelling. Improved technology in transportation, such as the electric railway car, provided a cheap and quick route from home to work in the urban centers. Just outside the central city were quaint Main Streets outfitted with idyllic park life housing. However, it wasn’t until the promulgation of the automobile that suburbs as we know them today really began to come into focus. The automobile gave the suburbs the ability to spread out further and further away from the central city. No longer did commuters have to live just outside the city under the tyrannical rule of train schedules. Now, they could leave their homes when they wanted, go (almost) as fast as they wanted, and avoid having to share their personal commuter space with anyone else.

Another milestone in the development of the suburbs was the design of the low-cost cookie-cutter tract home. Some of the first housing tracts of this sort were built in order to accommodate the rapid influx of defense workers near the Los Angeles area during World War II. Located near airfields and war plants, these housing tracts were built on farmland and consisted of small model-made stucco boxes. There was little variation between the units. Developers would build a floor model of a single home design, while land was leveled to meet the demand of ever-growing numbers of buyers. Homebuyers would financially commit themselves and then choose variations of the floor plan and exterior trim design. After the war, the demand for these units multiplied exponentially, as California had to accommodate the migration of ex-servicemen looking to start a family. In the 1950s, the typical design began taking on the distinct ranch-style—no doubt inspired by Western films—that is now the trademark of suburban homes in the American southwest. Now every American man could feel like John Wayne as he retrieved his morning paper on the porch.

“Now every American man could feel like John Wayne as he retrieved his morning paper on the porch.” (Via Wikimedia Commons)

In 1970, these houses were typically no bigger than 1,500 square feet. However, by 2007—the year that the housing bubble burst—the size of the average tract home had risen to 2,521 square feet. Enter the so-called McMansion.

For the Millennial raised in the suburbs, the McMansion is as common a sight as a brownstone was to a kid raised in Brooklyn in the 1950s, or a Victorian was to a San Francisco native in the late 19th century. These cheap, air-conditioned abodes can be found lining the hillsides at the limits of urban areas, isolated and insulated from the rest of the world, like clustered encampments on a forgotten space colony located on some distant asteroid in the far reaches of the galaxy. The McMansion defines the cultural landscape of the modern suburb. It’s the initial draw to move there: a “home” in the “country.” During the housing boom of the ’00s, these architectural abominations spread like cancer over the suburban landscape. In my hometown of Camarillo, a coastal suburb about 60 miles west of Los Angeles, I watched acre after acre of citrus groves, farmland and hillsides transformed into these subprime colonies.

The economic recession of 2008 was partly caused by the credit crisis arising from the housing bubble burst. Before the burst, an applicant with a virtually nonexistent credit score was capable of qualifying for a subprime mortgage. After 2008, this resulted in foreclosures of astronomical proportions and a market saturated in homes that no one could afford. The very icon of the American Dream—the suburban home—came to be associated with the country’s economic downfall. When the housing market’s effect on the economic recession is compounded with limited energy resources and the looming dateline of Peak Oil, the idyllic dream of the suburbs turns into an unsustainable, wasteful, chaotic mess.

The suburbs aren’t so much a place as they are a state of mind—a malleable mind susceptible to illusion. Their promise was to provide an affordable homestead to the middle class American family. But that promise wound up being nothing more than the legerdemain of Madison Ave. “Suburbia ends up being a false promise… not country living. It’s a cartoon of country living and a cartoon of a house. It has none of the amenities of country life, and none of the amenities of the town. In fact, it has all of the disadvantages of both,” said James Howard Kunstler in the 2004 documentary The End of Suburbia. When we realize that the promise of the suburbs was broken to begin with, how will we reconcile with the aftermath?

RELATED: Millions of Americans are Now Smoking DMT, and the Number is Growing

“Will we build a renewable energy infrastructure to support steady state economy? Or will we try to pursue a Beverly Hillbillies lifestyle in a Hunger Games world?” asked Richard Heinberg at a TEDx conference in Sonoma last year. He goes on to list some small-scale utopian ideals such as turning off commercials, putting your money in a local credit union, starting a garden, installing solar panels, and driving less while walking more. It’s a cute premise—going local—but something tells me that we’re going to go with the Hunger Games option. 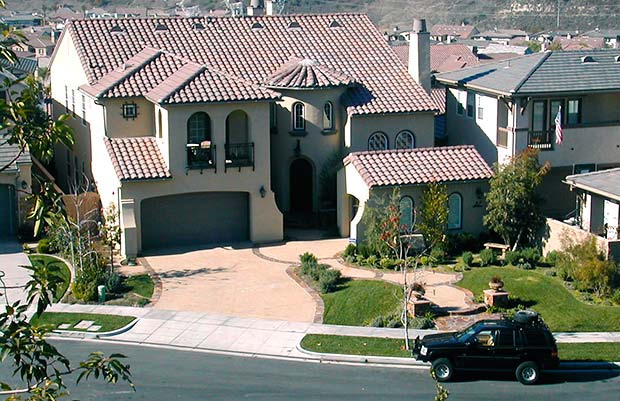 “Home, this must be the place”: An Orange County McMansion (Via Wikimedia Commons)

Back in 2009, Yasha Levine wrote a few stories on the Vice blog about Victorville, a California “exurb” about 100 miles east of Los Angeles on the edge of the Mojave Desert. Victorville was one of the biggest failures of the subprime market. It was built on a strip of a desert highway, an old military town until the Air Force closed the base in 1992. Then suddenly, during the housing boom, it transformed into a massive suburban sprawl. Many of the new inhabitants were inner city Latino and African-American families who believed it was their chance to live the American Dream in the suburbs. When the bubble burst, they were given the lie that “these people didn’t leave the ghetto; the ghetto left the inner city,” as Levine puts it. In a 2013 article, he recounts the terrifying post-apocalyptic atmosphere:

“Violent crime was soaring… Helicopter gunships cruised the skies day and night looking for criminals. Strip malls were emptying out while liquor stores did brisk business. Several new jails and prison facilities had been built around Victorville. In fact, I could see one of them—a massive three-in-one federal prison complex—from my porch. Not surprisingly, Victorville developed the highest parolee population in the county. Turns out, the prison-industrial complex is a growth industry in a post-bubble subprime city.”

So what will become of suburbia? Will towns like Simi Valley—America’s safest city, according to annual FBI rankings—dwindle into Mad Max apocalyptic hysteria? Or will they turn into sustainable garden shares outfitted with solar panels? Or perhaps it will be a little bit of both—maybe the abandoned strip malls will become black market megachains with pharmacies hocking Schedule I substances and sporting goods supplies stocking AR-15s.

Either way, the suburbs will start looking a lot more like the Wild West from whence they came. The John Wayne in me couldn’t be more excited.