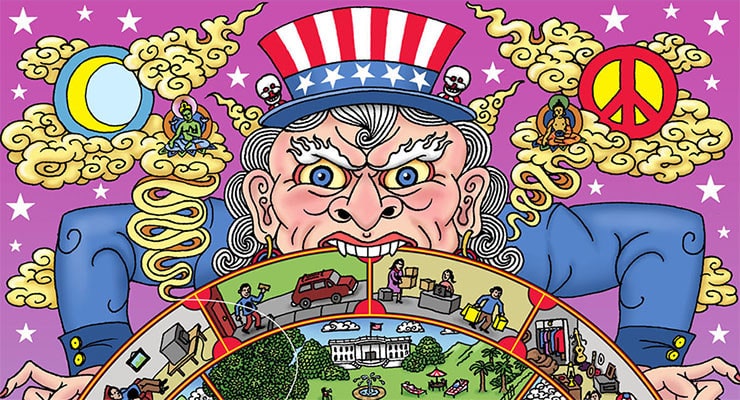 “Americosmos,” by Darrin Drda, uses American and Tibetan Buddhist mandala iconography to poke fun at the meaninglessness of existence

Huge thanks to artist Darrin Drda, who graciously allowed us to spotlight his incredible Buddhist mandala “Americosmos.”

It’s an American version of the Bhavachakra or Tibetan Wheel of Life, a diagram that shows the inherent suffering in all modes of existence, from the lowest hell realms to the highest heavens—suffering caused by the impermanence of all phenomena and the mind’s constant attempts to cling to and entrap the illusion of reality instead of embracing the truth of impermanence and emptiness. 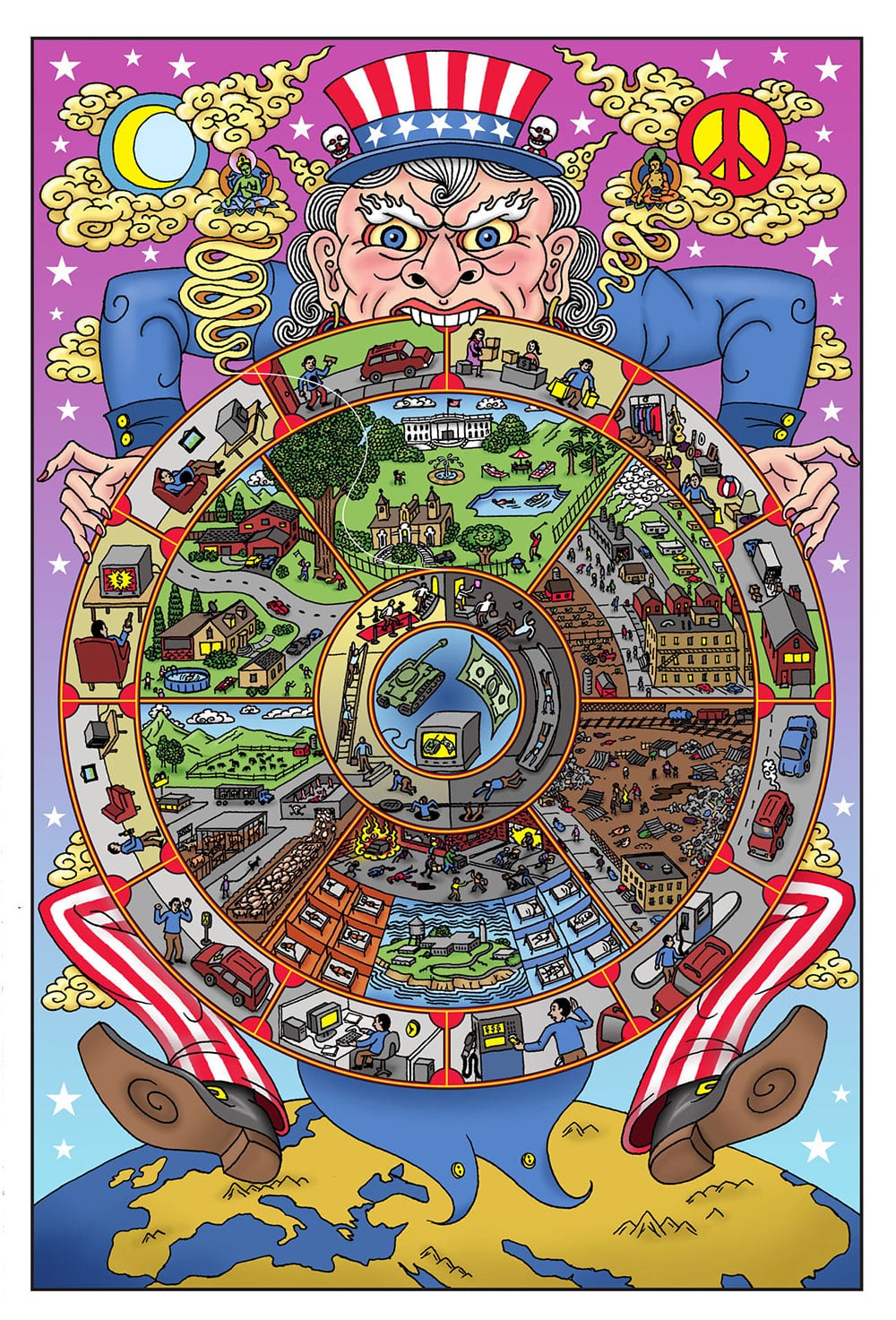 (I think Drda’s art depicts the inherent emptiness of American life quite well, don’t you? Follow Drda on Twitter here!)

Here’s what legendary Tibetan teacher Chögyam Trungpa had to say about this incredibly important Buddhist mandala:

“The whole Dharma is the language of samsara. That is why this painting is called the wheel of life, of bhavachakra—the wheel of existance, or becoming (samsara). This wheel is the portrait of samsara and therefore also of nirvana, which is the undoing of the samsaric coil. This image provides a good background for understanding illusion’s game, based as it is on the four noble truths as the accurate teaching of being in the world. The outer ring of the nidanas describes the truth of suffering; the inner ring of the six realms describes the impetus of suffering; and the center of the wheel describes the origin of suffering, which is the path.

“The wheel of life is always shown as being held by Yama (a personification meaning death, or that which provides the space for birth, death, and survival). Yama is the environment, the time for birth and death. In this case, it is the compulsive nowness in which the universe recurs. It provides the basic medium in which the different stages of the nidanas can be born and die.

“The outer ring of the evolutionary stages of suffering is the twelve nidanas. Nidana means ‘chain,’ or chain reaction. The nidanas are that which presents the chance to evolve to a crescendo of ignorance or death. The ring of nidanas may be seen in terms of causality or accident from one situation to the next; inescapable coincidence brings a sense of imprisonment and pain, for you have been processed through this gigantic factory as raw material. You do not usually look forward to the outcome, but on the other hand, there is no alternative.”

(From The Collected Works of Chögyam Trungpa, Vol. 2.)

How to Escape the Illusory Wheel of Suffering and Rebirth

There is one way to escape the illusory wheel of existence: Meditating enough to be able to see through it.

That’s largely why Ultraculture exists: To show people that this is possible, and to provide the tools necessary to break out of the system of the universe.

That’s also why we created our signature Hardcore Meditation course: A course designed to train you in everything you need to know in order to not just improve your life with meditation, but radically see through existence and understand what it really is.

Some might call this magick. We call it reality.