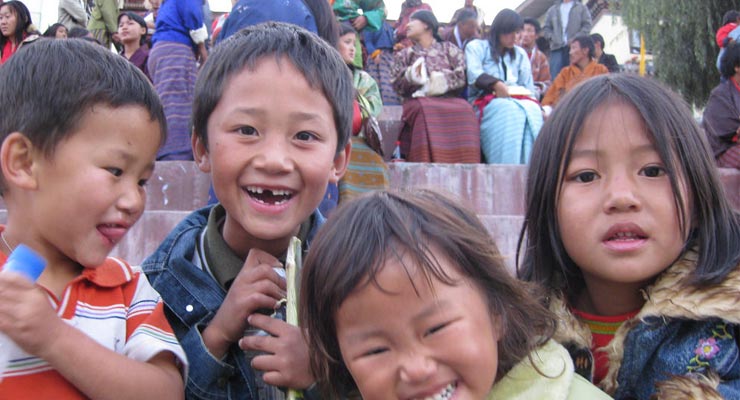 Bhutan is measuring the progress of their country by calculating “Gross National Happiness,” or GNH. Is it the beginning of a new social model?

The small Asian nation of Bhutan lies to the east of Nepal and to the south of China. Since 1999, the country’s government has been implementing policies and programs in an attempt to create a new societal system. In a world where the pitfalls of commercialism are reflected across the economies of many Western superpowers, Bhutan set off in a different direction. Rather than emphasizing competition, material wealth and social status, the Bhutanese government is claiming to focus on happiness and satisfaction. Instead of focusing on Gross National Product, Bhutan is focusing on Gross National Happiness, or GNH.

Over the past two decades, King Jingme Singye Wangchuck catalyzed some major changes to the government of Bhutan. Before this time, it was often thought of as a “third-world,” pre-industrial nation. The first of the king’s changes came in the form of limiting his own power. Instead of absolutism, King Jingme transferred most of his power to a council of ministers. Next, the Bhutanese lifted the ban on television and the internet as the first step towards modernization and global awareness.

The proponents of these reforms claim that they’re inspired by something deeper than political power. The leadership of Bhutan saw an opportunity to plan their entry into the modern age in an enlightened manner, rather than just figuring it out as they went along. Instead of a focus on gross domestic product, the Bhutanese leadership coined the term Gross National Happiness (GNH). According to King Jingme Singye Wangchuck, “Gross national happiness is more important than gross national product.”

The ideas behind Gross National Happiness (GNH) are supported by positive psychology. It’s known, for instance, that material wealth does little to influence overall satisfaction with life. A great deal of satisfaction comes from lifestyle decisions, interpersonal relationships and self-actualization. With this knowledge, the Bhutanese began making policy decisions based on their impact on people’s happiness, rather than the impact to wallets of lobbyists and corporations. Before any new legislation can be implemented, a GNH impact statement must be completed. This is similar to the Environmental Impact Statement required by some U.S. laws, but instead attempts to scientifically predict how the new policy will affect the people’s satisfaction.

Bhutan’s culture has been richly influenced by Buddhism, and the ideals of Gross National Happiness (GNH) draw a great deal of inspiration from Buddhist teachings. When King Jingme first began formulating a plan to move to a GNH-based society, he pledged commitment to building an economy to serve the unique desires of a Buddhist nation. Much of the research that led to today’s happiness policies came from the Centre for Bhutan Studies under the leadership of Karma Ura and the support of the King.

The four major focuses of the GNH program are sustainable development, preservation of cultural traditions, conservation of the natural environment, and the establishment of good governance. All of these ideals reflect a desire to create a society based on human needs. This is contrary to the methods of forcing humans to adapt to the uncomfortable sociocognitive conditions that have been prominent in the past centuries.

From the most basic psychological standpoint, it’s apparent that many tensions arise between a human being and life in a modern commercial society. A nation that places a high cultural value on happiness may be better for the natural state of the human psyche than a competition-based culture. It is, however, still too early to tell whether Bhutan’s program will be a success. Change cannot happen overnight, and religious and ethnic tensions still cause some problems for Bhutanese society. If it does succeed, it may set the standard for future societies. It also provides a blueprint for other developing nations that wish to emerge into the modern world in an enlightened manner.

Unfortunately, there are still many areas that Bhutan’s leadership struggles with. Since the 1980s, the large Hindu minority has been persecuted and suppressed by the government. Critics of the Bhutanese government point out the obvious hypocrisy. If the government truly values the happiness of the citizens and the Buddhist principles of loving kindness, they would extend the protection of the national happiness initiative to all residents, not just Buddhists. The Hindu Lhotshampa minority has suffered abuses ranging from cultural and linguistic oppression to torture and sexual assault. While portions of Bhutan’s ideals are being celebrated as revolutionary, it is impossible to fully accept the government’s intentions while human rights violations are occurring. Other critics point to the subjective nature of happiness, and the fear that the government will begin to “tell people” what is best, rather than letting the people choose. Only time will tell what the future holds for the small nation of Bhutan.

Some scholars are beginning to point to the social and economic woes of today as harbingers of the end of traditional capitalism. On a national level, recession, debt and austerity cuts have been chipping away at humanity’s confidence with this system. On an individual level, rates of depression and anxiety are at an all-time high. Many point to the value systems that accompany capitalism as a major source of these psychological afflictions. Before Bhutan began its experiment, there was an illusion that the world would simply progress further and further into the hedonistic trance of wealth, status and social stratification. Today, however, there is a glimpse of hope that one day humanity will rise up against sorrow and make the collective decision for happiness. Regardless of whether Bhutan’s program is genuine or simply a political ruse, the idea behind Gross National Happiness (GNH) is simple and positive.