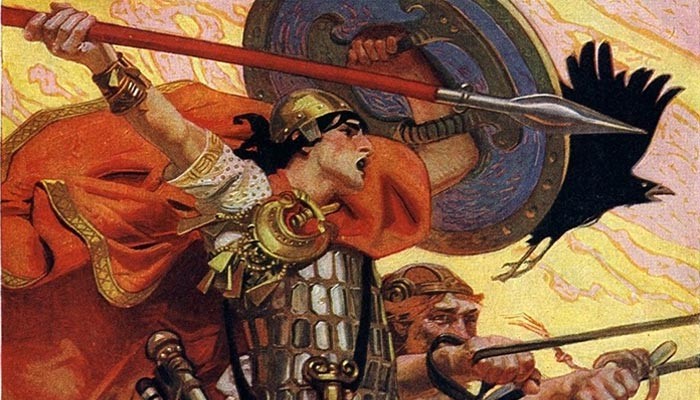 Here’s six of the most fascinating and spellbinding stories from the psychedelic annals of Celtic mythology. Check out the awesome deeds of the Celtic gods and heroes!

While Greco-Roman mythology and Norse mythology might be incredibly popular, there are plenty of ancient legends or stories that are less explored. As an Irishman, I’m always disappointed that more people don’t know the stories of my ancestors, the Celts, and the Celtic mythology that I love. Those who know a little about my island might be amazed to learn that it was once populated by a race of red-haired, poetry-composing, battle-ready boozers… well, maybe they wouldn’t be too surprised. But the Celts’ stories are populated with creatures, people and ideas are often even more fascinating and bizarre than those from more familiar mythologies.

And so, like the poets and storytellers of old Ireland, I’m here to regale you with some of their stories.

Many world mythologies have an ancient race of gods that the present gods have to defeat in order to take their place at the top. The most recognizable example are the Greek Titans, but plenty of world mythologies feature this motif—including Celtic mythology. Here in Ireland, our crop were especially fascinating. They were called the Fomoire, and their name, in Irish, means “under the sea.” They were said to be a race of demonic giants, and the descriptions of them vary between humans with the heads of goats and creatures with one eye, one arm and one leg.

However, I have to say that I doubt the latter, as they did a phenomenal job of fending off the first few people who tried to conquer Ireland from them. They either afflicted invaders with plague or enslaved them. They were said to be giants who dwelled in the sea and ruled over the domain of death, night and cold. Many theorize that they might have actually been based on a sea-faring pirate people who conquered Ireland in the past. After conquering a number of tribes and peoples, the goat headed sea monster pirates (a phrase that gives me so much pleasure to type) were conquered by Ireland’s major gods, known as the Tuatha de Danann.

This is one of my very favorite stories from Celtic mythology. Aengus was a god of love, roughly an approximation of the Greek cupid—just less cherubic and more like a scruffy, bearded grizzly man. Not exactly a vision of ethereal beauty, I know. But Aengus did happen to spot such beauty in one of the most well-known stories about it. It’s said that Aengus once had a powerful dream-vision of the most beautiful woman in all of Ireland while he was sleeping one night. When he awoke he was sick with love for this strange woman, feeling weak and powerless, and he began to become gaunt and thin from not eating.

Ah yes, young love, don’t we all know it well—the butterflies in your stomach, the giddy excitement, your beloved turning out to be a swan. Well, that last part might just be a Celtic thing. Aengus discovers his beautiful dream-maiden in a lake known as “Dragon Mouth.” The only trouble being that she, in the form of a swan, is surrounded by 150 other swans. But he would recognize her anywhere, surpassing all the other swans in beauty. He learns of the curse put upon her to change into the form of a swan and makes the decision to change into a swan, and the two fly off to be married forever. So folks, next time you get bothered by your loved one trying to change something about you, be glad you’ve never had to grow feathers and a bill to satisfy the one you love. 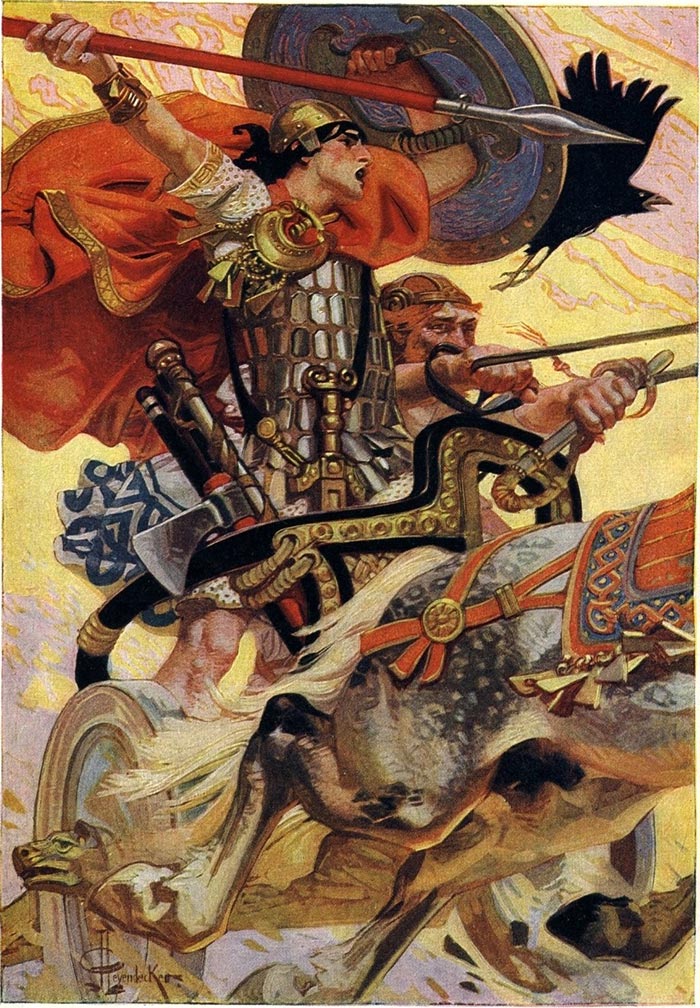 Cuchulainn is the Achilles of Gaelic mythology. He is a great hero, mighty and seemingly unstoppably strong, and much less inclined to spend a whole saga throwing a temper tantrum like his Greco-Roman counterpart. One of the most famous stories of Cuchulainn is that of his “wasting sickness.” At a great fair, the legendary warriors of northern Ireland (known as the “Ulaid,” owing to their coming from the province of Ulster) and their wives have gathered and are indulging in song, dance and feats of great athleticism. Suddenly a crowd of beautiful birds gather and the warriors suggest killing the birds to provide gorgeous, feathered ornaments for their wives.

Cuchalainn emerges, bearded and fearsome, and with a single blow drops all the birds from the air, providing ornaments for all but his own wife. When two more birds appear in the air, bound together by a golden chain and singing an enchanted song, Cuchulainn’s wife warns him against striking the birds, as they are divine beasts. Yet Cuchalinn strikes them with a stone from a sling, though fails to kill the birds, only clipping one’s wing.

Almost immediately, Cuchulainn falls ill, and succumbs to a yearlong sleep. He suffers visions of beautiful cloaked women beating him viciously and he learns that only by journeying to the Otherworld with these beautiful women will he regain his strength. Cuchulainn journeys to the Otherworld, known as Mag Mell, and helps the divine spirits best their enemies. In doing so he falls in love with one of the women, known as Fand, and his wife is understandably unhappy. Fand relinquishes Cuchulainn to his wife, although both she and the hero are heartbroken.

The druids prepare a special potion for Chuchulainn and his wife, and the two forget the encounter as the hero’s strength is restored.

The evil stepmother is a recurring trope in so many mythologies and the folklore of various countries. The Irish equivalent comes in the story of the Children of Lir, a favorite folktale told to Irish children at a young age. The god Bobh Dearg was elected king of the pantheon of gods, much to the annoyance of his rival, the sea god Lir. In order to appease Lir, the new king of the gods gave his daughter, Aobh, away to Lir.

Lir had four children with Aobh before she dies. The children missed their mother terribly, so Bobh Dearg married Aoife to Lir. Aoife was resentful of the love that Lir and his four children had for the dead Aobh, and so she plotted to get rid of the children. She decided against killing them and instead cast a spell over them, changing them into swans. They lived as swans for 900 years, migrating around the lakes and waters of Ireland, before the sound of a church bell called them to a priest, who returned them to human form.

This story is probably most interesting in that its ending is evidence of the Christianization of Ireland around this time period, and shows the effects on myth that might have come about given that the most studious keepers of Celtic mythology were Christian monks who often added their own divinely inspired flourishes to encourage people to convert.

5. Thumb Sucking and the Almighty Salmon 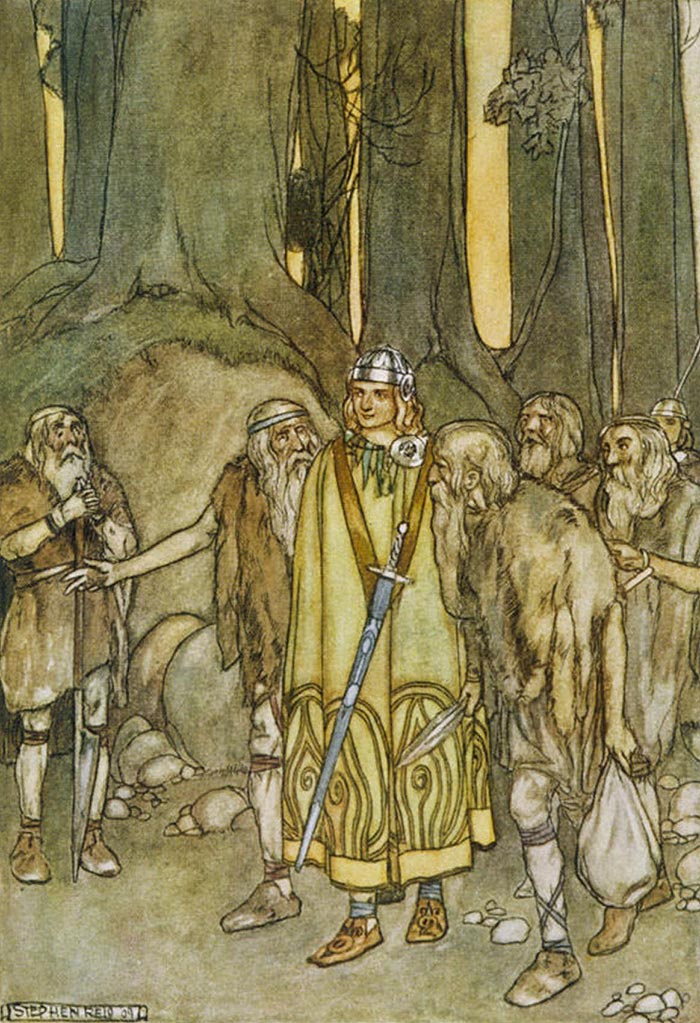 Celtic mythology is littered with mighty warriors, and Fionn Mac Cumhaill is among the most notable. Fionn led the Fianna, a band of mythological warriors so influential and impressive that the most successful political party in Irish history (Fianna Fail) is named for them. But how Fionn received his skill is an interesting story. When Fionn was a young man, he lived with a wise poet named Finnegas. Finnegas was searching for a salmon known as the Salmon of Knowledge which—after eating hazelnuts dropped into the well of wisdom—had gained all the knowledge in the world.

Finnegas, after successfully catching the fish, gave it to Fionn with strict instructions not to eat it. Fionn cooked the salmon and, checking to see if it was done, burned his thumb in the process. Fionn sucked on his thumb to ease the pain, and received all the knowledge of the world concentrated in a single piece of fish fat. Fionn brought the salmon to Finnegas, and related the story. Seeing the gleam of wisdom in the boy’s eyes and noting his honesty in not eating the fish, Finnegas gave the young boy the whole salmon.

From that day forth, the legendary warrior could call forth all the world’s knowledge simply by biting on his tongue. It’s one of the most incredible stories in all of Celtic mythology.

The story of Fionn Mac Cumhaill only gets more exciting. At one stage, Fionn must confront a fire breathing demon that has been burning down the great castle of Tara on Samhain (the Celtic New Year) for 23 years. The demon, called Ailleen, lulls the warriors of Tara to sleep with an enchanted song before burning the place to the ground. Fionn cleverly touches the tip of his magical red hot spear to his forehead throughout the night, using the pain to keep himself awake, before pursuing and killing the demon with the very same spear.

It was this act of bravery that won Fionn control of the band of warriors known as the Fianna, and his spot as one of the most important heroes in all of Celtic mythology.