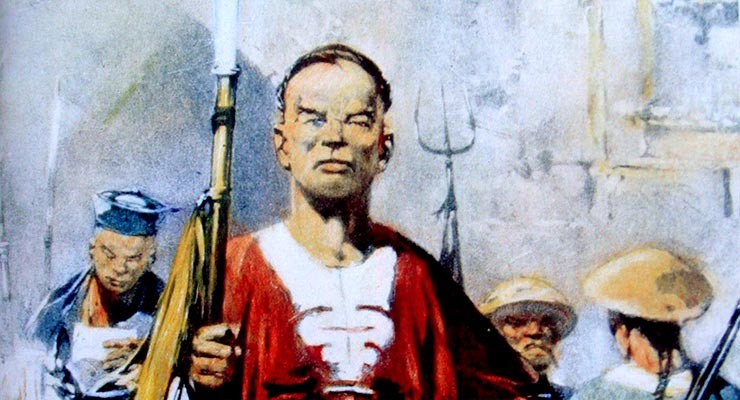 How the spiritual beliefs of common people have sparked spiritual revolution and massive resistance movements throughout world history…!

Mystical, spiritual and supernatural belief can be a superb way of transforming yourself and your view of the world. Spiritual techniques from traditional prayer to chaos magic can be a phenomenal way of performing a kind of interior alchemy, boosting your concentration, well-being and creativity, among other things. But the goal of spirituality isn’t just to change oneself, but to transform the world around you in accordance with your higher vision—or, as Crowley would put it, “causing change to occur in conformity with will.” That is, spiritual revolution.

In many ways, political revolutions, regardless of ideology or location, want to change the world radically in accordance with certain visions and values. The line between political rebellions and acts of spiritual resistance can sometimes blur, and when they do this makes for a fascinating combination of material tensions and magical inspirations.

It’s only when one delves into the rich and stories annals of Chinese history that you realize just how much we missed out on in school, where the history we’re taught is largely Eurocentric.

I don’t just mean that studying Chinese history can give us a wider historical perspective or could inform us about a nation that is now a major world player, but simply that by ignoring China we miss out on some amazing and fascinating stories.

Probably my personal favorite is the Boxer Rebellion of the early 20th century.

As the century turned, the Chinese were in a position that would make any of us a bit mopey. Once an influential world power and one of the world’s largest economies, the Chinese were being increasingly manipulated by foreign powers, such as the British and the Russians.

The Chinese watched as vital natural resources were siphoned away by foreign capitalists. Foreign Christian missionaries worked to convert the Chinese people from their native religions and belief systems, which tended to be more eclectic, animistic and shamanic than the Judeo-Christian beliefs the missionaries were foisting on them.

After a series of floods left many areas of China in economic ruin, something had to give.

And that it did, in the form of “the Boxers,” or “Militia United in Righteousness.”

The Boxers were roving bands of young, disenfranchised Chinese men who combined strict martial arts regimens with a commitment to traditional Chinese spiritual practices. Their spirituality became a kind of revolutionary nationalism and a force of supernatural resistance.

They claimed to summon the spiritual energy of their ancestors to perform such feats as flying, gaining super strength and becoming impervious to bullets.

They quickly grew in popularity and went on to lead an insurrection that, while ultimately unsuccessful, would serve as an inspiration for the Chinese nationalists who would go on to set up the modern Chinese state.

Spirituality can be an effective rallying cry for a subjugated people crushed underneath an imperial boot.

In a country like Vietnam, dominated first by French imperial interests and then pulled and tugged between the Soviets and the Americans, this was definitely the case.

Most people have an image of the Vietnam war informed by films like Platoon and Apocalypse Now, where American soldiers flail around the humid jungle as Communists burst like land mines from the forest floor. But these simplistic images leave out a fascinating group on the magical margins of this conflict.

This group was a 2,000 man Vietnamese militia led by a man called Trinh Minh The. These warriors were united under a single spiritual banner: Cao Dai—one of the most popular religions in Vietnam.

RELATED: 6 Ways to Break the Hypnotic Spell of the Mainstream Media

Founded in 1926, it combines elements of Christianity, Buddhism and native ancestor worship. Its founder even received his religious calling while conducting a séance.

The Cao Dai militia were notoriously tough, and in the name of guarding their young and burgeoning spirituality, revolted against the French and the communist Viet Minh, as well as American backed forces.

This group, inspired by their eclectic spiritual tradition (in which Charlie Chaplin is revered as a saint), were noted as one of the most competent and ferocious military organizations in all of Vietnam, and their ability to inspire men and hold territory has led to Cao Dai’s immense popularity today.

So ordinarily, some guy declares himself related to Jesus Christ and gets carted off to a mental institution.

In China, however, that’s not quite the case. In China, that man leads a rebellion of thousands of people that ultimately causes more causalities than either of the World Wars.

The Chinese Taiping rebellion is another of those fascinating events in Chinese history that I always think more people should know about. In the 1850s, a failed Chinese Civil Servant named Hong Xiuquan received a mystical vision telling him he was the younger brother of Jesus Christ.

He learned that he was destined to lead a band of spiritual revolutionaries to bring about heaven on earth. He accumulated followers quickly with his radical preaching about social and economic equality and diatribes against corruption.

Their rebellious state, called “the Heavenly Kingdom,” existed in Southern China from 1851 to 1864. The society was considered classless, and banned practices such as foot binding. Slavery, polygamy, gambling and the use of alcohol, tobacco or opium were all outlawed.

The Heavenly Kingdom also minted small amounts of its own currency, bearing the name “Holy Treasure.”

However, conflict with the ruling Qing dynasty would lead to the downfall of the Heavenly Kingdom forces after more than a decade of rebellion. Still, their memory lived on and inspired later Chinese nationalists, as well as the anti-imperialist philosophy of Chinese Communist leader Mao Zedong.

Spiritual Revolution #4: The Jacobins’ “Cult of Reason/The Supreme Being”

Spirituality is such a natural and innate thing for human beings, that sometimes we just can’t help approaching it even when we’re rejecting it.

Add in the transcendent values and heightened emotions of a revolutionary situation, and you have yourself a recipe for some strange spiritual concoctions.

And that’s exactly what emerged from France in the later stages of the revolution in the 1700s. We should all know the history of the French revolution: people revolt against King, found modern democracy, things go bad and heads start being separated from bodies.

But the story of the good revolution turned vicious has so many more fascinating factors to it, one of these being the Cult of Reason.

French revolutionaries saw the clerical class of the French church as being illogical and corrupt enemies of their revolution.

If their revolution was to build a new world based on logic and reason then the foolish superstitions of religion must be swept away. Thus priests were killed and churches were ransacked by revolutionaries who preached sober-minded reason.

Of course, soon enough, a new kind of spirituality began to develop.

Churches were decorated to honor the human faculties of intelligence and reason, the new gods of the revolution.

Beautiful young women were paraded around in costume, worshipped as the goddesses of Liberty, Truth and Equality.

Altars were constructed to famed philosophers and the irreligious values of the revolution became a kind of religion in and of themselves.

It seems that humanity, no matter how logical, rational and reasonable, cannot run away from a sense of the transcendent, even when we’re burning down churches and denigrating faith.