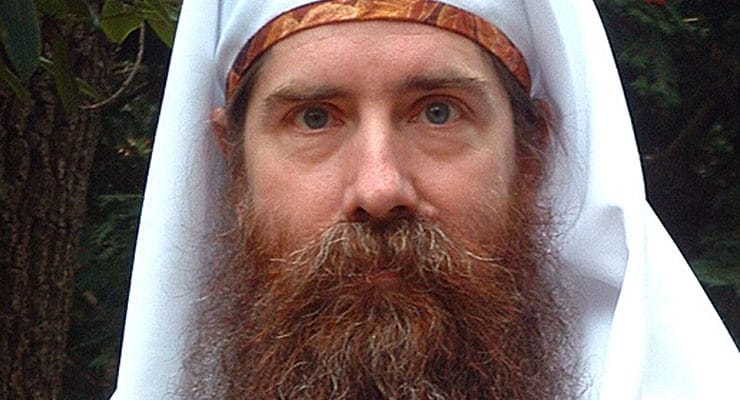 An interview with John Michael Greer – author, magician, environmentalist, activist and High Druid – who has been a leading light of paganism for years.

John Michael Greer is the Grand Arch Druid of the Ancient Order of Druids in America (AODA) and an environmentalist, historian, and littérateur. He’s written over thirty books, on topics ranging from Hermetic philosophy to the peak oil crisis (see his Amazon author page here). Greer is also the author of the Archdruid Report, an immensely popular blog that focuses on contemporary social and political issues in the public sphere. As a boy, Greer’s role model was Gandalf, and it wouldn’t be far from the truth to call John Michael Greer a present-day member of the Istari, serving as a dogged voice of reason in the whirling chaos of modern society. In an interview with us, John had some practical wisdom to share about “green wizardry,” the reality of mind control and the dangers of universal belief in the idea of progress.

Ultraculture: What first spurred your involvement in ecological activism?

John Michael Greer: Raw visceral delight in living nature. That’s been part of my experience since as far back in childhood as I can remember.

Ultraculture: In reference to peak oil and the ongoing expansion of industrialization and globalization, what is the duty of the “green wizard?”

John Michael Greer: ”Duty” is an overused word, and not a particularly useful one; these days, it normally amounts to “why you ought to do what I won’t”—think of all those climate activists who insist that everyone in the world has a duty to cut their carbon footprint, while they themselves continue to live a typical middle-or upper-class industrial-world lifestyle. It seems more useful to me to talk in terms of possibilities. Peak oil and the “global economy” boondoggle are among the things that make our current way of living radically unsustainable, and what is unsustainable, sooner or later, will not be sustained; thus it’s time, and past time, to start creating other ways to live that fit within the hard limits of a finite planet burdened with the consequences of the idiotic decisions of the recent past. That’s what green wizardry is about: finding ways of life that will work in a de-industrial world, learning them, putting them into practice now, so that as the industrial project chokes to death on its own wastes, the alternatives are already in place.

Ultraculture: Decentralization is something you feel strongly about. How does that connect with the idea of the genius loci or “spirit of the place” in localities?

John Michael Greer: Excellent! That’s a connection few people consider these days. It’s not so much, by the way, that I feel strongly about decentralization; it’s that I recognize that the so-called “global economy” is a boondoggle, a temporary gimmick to allow a few rich people to get richer by exploiting cheap labor overseas, and like all such gimmicks, it’s not going to last indefinitely. As the industrial age stumbles to its end, local production of goods and services for local consumption is going to be the only option left, and that also means that most other things are going to relocalize in the same way.

One thing that tends to be forgotten these days by people who spend too little time in the real world—that is, the world of nature—and too much time cooped up in little metal boxes of one kind or another, is that different places have their own distinctive qualities, which aren’t limited to the obvious ones. That’s a large part of what the ancients were talking about when they said that every country and region and locality had its own spirit, goddess, or guardian angel, with which the human residents have to deal if they’re going to live there successfully. Industrial humanity convinced itself that it could ignore that experience, and treat land as an interchangeable commodity; getting back to a saner and more productive relationship with the places in which we live and work is an important part of the work ahead of us. 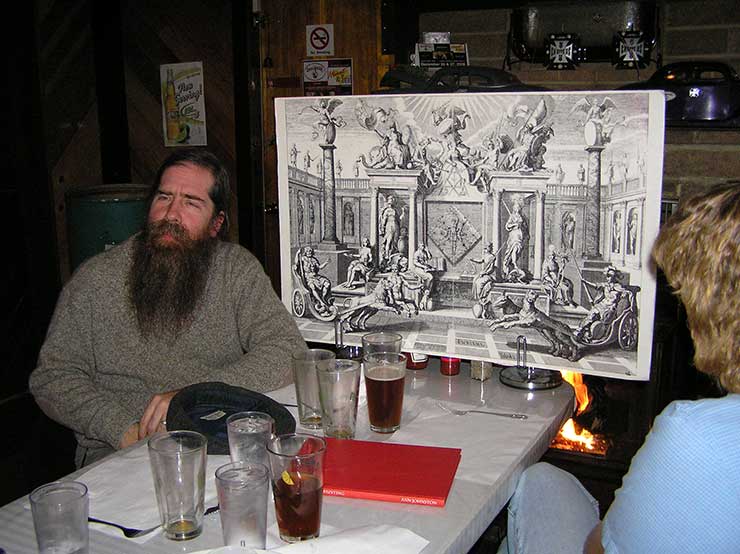 Ultraculture: In several of your works you’ve suggested that American culture, and to some extent Western society in general are all fervent followers of “The Religion of Progress.” What do you mean?

John Michael Greer: Exactly what the words imply. All the blind faith and irrational fantasies that other civilizations have enshrined in their religions are focused by modern industrial humanity on this thing called “progress”—the conviction that history is a straight line leading from the caves to the stars, that industrial humanity is the cutting edge of that process just now, and that in order to fulfill humanity’s destiny, we have to keep on progressing. What does “progressing” mean? That depends, day by day, on who wins the no-holds-barred political struggle to get their agenda defined as the next step in progress. That is to say, this word “progress” doesn’t actually mean a thing; it’s a will-o’-the-wisp, a phantom road to Utopia hanging somewhere off there in the inkblot patterns of the future, and yet people are fixated on it. Try to tell most people these days that we’re not progressing onward and upward toward some bigger and brighter future, and it’s just like trying to tell some illiterate medieval peasant that heaven with God and all the saints and angels isn’t up there in the sky any more.

Ultraculture: Authors such as Ioan Culianu and Edward Bernays have argued that teams of communications executives in media and in government resemble sorcerers; manipulating symbols, images, and words to affect the emotions of the masses. In the Archdruid Report, you’ve also spoken about the realities of mind control. With this in mind, what kind of education, magical or otherwise, would you recommend to promote clear-headedness and independent thinking?

John Michael Greer: First of all, they don’t resemble sorcerers, they are sorcerers, practicing a degraded but effective form of magic. When watching a bunch of little colored images on a glass screen convinces people that their self-respect depends on whether they drink the right brand of fizzy brown sugar water, we’re talking about sorcery pure and simple. Those people are under an evil enchantment right out of a Brothers Grimm fairy tale, and it’s high time that we discuss it in those terms.

How do you get out from under the spell? The first thing you do is stop watching the little colored pictures. I mean that quite literally. The more of the effluvia of modern media you absorb, the more your thinking will be controlled by the charged emotional images and logical doublebinds that are pumped at you in every ad. Drop your TV into the nearest dumpster, decrease your exposure to other media as much as possible, and as the effect wears off, you’ll find that a lot of things that seemed clear and simple and reasonable when you were under the spell start looking like the self-destructive stupidities they actually are.

RELATED: How to Protect Yourself From NLP Mind Control

Beyond that, there are plenty of choices, but all of them have one thing in common: You need to learn how to think. Thinking is a learned skill, and most people these days never learn how to do it. Our educational system teaches people not to think—why do you think parroting the approved answers to multiple choice standardized tests is so important a part of education today? It’s a very effective way to teach children not to think for themselves, to repeat mindlessly whatever they’re told, and above all never to ask questions about whether what they’re told is true and who benefits from that belief.

So it’s essential to learn how to think: to know how to reason, and to know the limits of reason; to know how to remember, and how to stock your mind with things worth remembering; to know how to imagine, how to will, how to use all the other powers of the mind—and to do all these things until they come naturally. Those are all learned skills. Until you learn them, you’re basically just a robot—and of course that’s exactly what the sorcerers want: people who buy and guzzle the right brand of fizzy brown sugar water, and snap up all the other garbage offered by consumer society, with no more mental activity than Pavlov’s dogs needed to start drooling at the sound of a bell.

Ultraculture: You’ve written several fascinating fiction works. What I love about Lucretius is that he found a wonderful way to be didactic, socially conscious and enchanting at the same time in his The Nature of Things. How do you manage to write lucid and thought-inspiring fantasy without getting out of touch with societal concerns?

JMG: Fantasy started out as a way of addressing societal concerns! William Morris, who invented modern fantasy fiction in the late 19th century, was a left-wing political activist as well as a brilliant poet, author, painter, printer, designer—there was basically nothing the man couldn’t do well. He invented fantasy fiction as a way of challenging the robot-mentality of his own time. That’s the core reason that his fantasy novels have been completely and systematically erased from our collective memory.

J. R. R. Tolkien was cut from the same cloth. His famous trilogy was a brilliant critique and satire directed at the religion of progress and the myth of the machine. Nobody talks about that now, and of course the movies stripped that right out of the story and turned it into empty spectacle. Long before Peter Jackson sank his orc-fangs into the bleeding corpse of the story, though, that same act of evisceration had been carried out by an entire genre of cheap derivative fantasy that borrowed all of Tolkien’s props and costumes and threw out all of his ideas.

What is The Lord of the Rings, after all? It’s the story of a successful war against progress. Sauron is the most progressive character in the book; he wants to get rid of elves, dwarves, hobbits, trees, and all the rest of that old-fashioned claptrap, and replace it with a rational, productive, cutting-edge industrial landscape of slagheaps and toxic waste.

RELATED: Is the Lord of the Rings Trilogy a Gnostic, Occult Parable?

Saruman is the classic intellectual apologist for progress—his little canned speech to Gandalf about the inevitable triumph of Sauron is a really clever parody of all the progress-is-unstoppable rhetoric that abounded in Tolkien’s time, as it does in ours. Tolkien was very forthright about that, but with few exceptions everyone’s simply gone on pretending that he didn’t say any of the things about progress and technology that he said so many times, and not just in his fiction.

I don’t claim to be Tolkien’s equal as a writer, or for that matter Morris’, but I’ve tried to do the same thing in my fiction: to use fantasy (including what’s labeled “science fiction” and might better be called future fantasy) to hold up a mirror to the world we inhabit, and to suggest that things can be different if we choose to make a difference. That’s what fantasy fiction was originally about; that’s what motivated the great classics in the field; and I’d be delighted if authors of fantasy fiction could return to that sort of creative vision, instead of dressing up little dolls in medieval outfits and putting them through the same dreary routines over and over again. Fantasy can be more than that; future fantasy (that is, “science fiction” without the Pavlovian dog-drooling over sparkly new machines) can be more than that; and I’ve tried, in my own way, to show some of the possibilities.

John Michael Greer’s latest book is Twilight’s Last Gleaming, “a chilling high-concept geo-political thriller where a declining United States and a resurgent China come to the brink of all out nuclear war.”