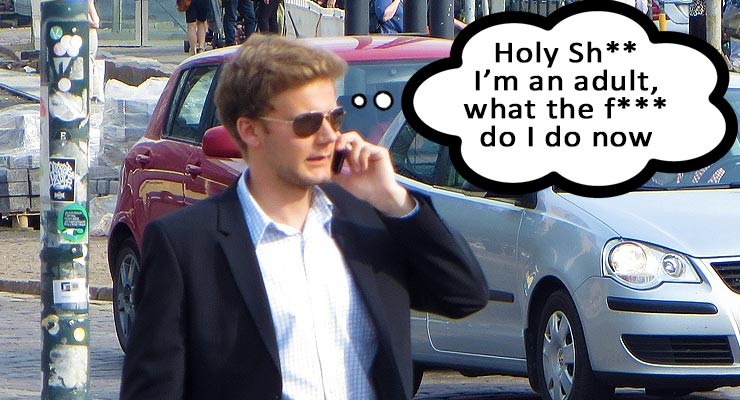 Here’s ten crucial attitude adjustments that have helped me master adulting, grow up and be a better person

Last month, I turned 33, an age that most would consider full adulthood. So today I’m deciding to write up a few of the most crucial life skills and attitudes I’ve picked up that have helped me a) not die, b) not be a dick and c) get out of the occasionally hellish attitude problems of one’s teens and twenties. Hopefully these adulting tips are of use to you—I’m not saying I’m the master of them, either. It’s all a process, and I’ve learned all these by doing their complete opposite. But on my best days, I keep these ten things closely in mind. In no particular order, they are:

Adulting Tip One: See Society as a Game

I once saw society as an oppressive, dominating monster, a Saturnian Archon that eats its own young—the 1% dominating the 99%, a rigged game, and a delusion. I don’t see it this way at all anymore—in fact, I now recognize my earlier fear of the world as just that—fear, stemming from inexperience, which is impossible to circumvent in your twenties (even if, like me, you had been in the workforce consistently since before it was actually legal for you to work, pausing for college). After you get out of your twenties, though, you’ve likely had the shit kicked out of you so many times that you hopefully start to get a good sense of what behaviors work to get positive results and which don’t. Hopefully, you start encouraging the behaviors in yourself that work, and discouraging the ones that don’t.

If you’re smart, that’s when you start seeing society as game—instead of trying to break the rules, you start trying to understand the rules, and work with them. They’re not perfect, and often need structural change (because they remain rife with bad programs of class and caste system, glass ceilings and racial discrimination—this is where I will readily acknowledge my white male privilege), but they’ve been built up over thousands of years as a scaffolding that more or less works. Consider that despite our many problems, we are not currently all engaged in trench warfare or dying of the black plague, generally have much higher life expectancies and qualities than our ancestors, and have history’s entire accumulated knowledge at our fingertips. Society can be refined but should not be destroyed—and when you stop trying to destroy society, you can start to see how it is refining you.

Mark Pauline of Survival Research Labs once put it best: “Society wants to play—it just wants to play really hard.” You’ve likely seen plants which are tied to stakes as they grow. That’s society—an imposed structure that helps you grow taller. A magical system, as you will, that works to your advantage ONCE you learn the rules. (For more on this critically important idea, see my essay on “Die Antwoord’s ‘Pitbull Terrier’ and occult social control.”)

You will fail. You will fail a lot. Failure is fine—giving up is not. Pick yourself up every time and keep going. Do not dwell, do not ruminate and do not take failure as a sign that you are a bad person. It’s a sign that you performed an action or behavior, or series of actions and behaviors, incorrectly—and it’s now valuable information you can use to adjust accordingly, thereby bringing you closer to getting it right and success.

Adulting Tip Three: Invest Your Time, Instead of Wasting It

There is no free lunch, no quick fix, no shortcut, etc.—we’ve heard it all, and yet we constantly seek for instant gratification for our desires, wrecking ourselves in the process. Adulthood, in many ways, recapitulates an evolutionary shift from hunting and gathering to farming. Instead of going out every night to look for a temporary mate, getting wasted to get temporary enjoyment, hopping from temporary job to job, and generally running here and there like an insane monkey looking for resources in the big bad urban jungle, you sit your ass still and start farming. You regularly invest in stabilizing a career, a relationship, core friends and financial savings, starting small at first, so that you can harvest your work sustainably far into the future without burning yourself out trying to acquire things that don’t truly belong to you, because you didn’t put the time in.

Adulting Tip Four: Shift to Understanding Life as Contextual Instead of Essential

This may be the most crucial item on this list: Stop thinking things have essences. They don’t—at least not in the way you think. Behaviors and events are contextual, and as soon as you understand that, the oppression and depression will start to lift. If your boss is a dick, it’s not because she’s an awful person—it’s because you’re in a situation and context with her that produces that behavior. If you fuck up, it’s not because you’re a failure at heart—it’s because you were in a contextual situation that produced that outcome. This is a primary reason, by the way, to cultivate friends who regularly experience happiness and success—it puts you in a happy and successful context.

Adulting Tip Five: Do Not Bear Grudges—Let the Past Go

Seriously. All bearing a grudge will do is eventually turn you into the person you hold the grudge against, because you’ve been meditating on them for so long.

Likewise, you need to consistently—like every day—make a habit of consciously letting the past go. Anything less means you’re not responding to your environment, you’re responding to delusions in your mind, ideas about the world you held when you were less experienced, faulty self-images—and that’s dangerous. Let it go and see what’s right in front of you.

Adulting Tip Six: You Need Others—Life is a Team Sport

Nobody does it alone. The more that people conglomerate into groups—families, companies, clubs, societies, religions, multinational corporations—the more generally secure they are. Of course, the downside is the possibility for institutionalization and groupthink, but judicious associations with others are critical. Research suggests that exile from groups is actually MORE damaging to the body and immune system than serious disease or critical injury (I can’t find the article right now, but I definitely read it). We’re social animals—down to our very physiology. Stop competing and start co-operating.

Adulting Tip Seven: Look Sharp and Show Up on Time

It’s the small things. Groom yourself, dress nice, and show up on time.You have no idea how much these simple actions mean to employers and significant others. When you don’t do that, you don’t look like a cool devil-may-care creative maverick, you look like a fuck-up. (How many times I have learned this the hard way.) Take this advice from Anthony Bourdain (via Men’s Journal):

Show up on time. I learned this from the mentor who I call Bigfoot in Kitchen Confidential. If you didn’t show up 15 minutes exactly before your shift — if you were 13 minutes early — you lost the shift, you were sent home. The second time you were fired. It is the basis of everything. I make all my major decisions on other people based on that. Give the people you work with or deal with or have relationships with the respect to show up at the time you said you were going to. And by that I mean, every day, always and forever. Always be on time. It is a simple demonstration of discipline, good work habits, and most importantly respect for other people. As an employee, it was a hugely important expression of respect, and as an employer, I quickly came to understand that there are two types of people in this world: There are the type of people who are going to live up to what they said they were going to do yesterday, and then there are people who are full of shit. And that’s all you really need to know. If you can’t be bothered to show up, why should anybody show up? It’s just the end of the fucking world.

Oh yeah—start getting up early and going to bed early, too. That shit will change your life.

Adulting Tip Eight: Give People a Break—They’re Doing the Best They Can

I’ll never forget a cartoon (I have no recollection of who it was by) I saw some time in my college years, featuring a ranting cynic in a shopping mall (possibly based on Bill Hicks or Henry Rollins) shouting that people are complacent, conformist, mindless sheep. The next panels zoom in to a nondescript mall shopper with a face full of tension and fear, clearly terrorized by the screamer, with a thought bubble over his head that reads “Hope I don’t die of colon cancer soon.” That made an impression. You can’t win friends or influence people by attacking them, and you certainly can’t change them. Give people a break. They’re doing their best with the resources they have.

Adulting Tip Nine: Nobody Will Do It for You

Adulting Tip Ten: It’s What You Give, Not What You Get

Another truism and cliché—yep. Truisms and clichés stick around because they’re important. And this is one of the most important. If you want to make more money, provide more value for people—your boss or the people you are selling to. If you want to be loved more, love more. And on and on and on. The more you give, the more you get—and don’t worry if they don’t balance. Give more than you get, always, instead of clinging to every cent like a miser or trying to rob your environment like a vampire. Open up, let go, and see what you can give the universe.

As an adult, you should really not be unsustainably getting wasted, getting high, eating unhealthily, being an unproductively promiscuous maniac or otherwise acting like you’re still in college.

But that doesn’t mean you have to stop. It just means you plan that stuff out so you can enjoy your debauchery in productive, intelligent and meaningful ways that don’t threaten to wreck your life or the lives of people around you. Sip your champagne, buddy, don’t chug it. It’s so much better that way.

For the “adulting fast track,” check out my course Unlock Your True Will, which will help you hone down and discover your true purpose in life. Nothing helps you grow up like having a positive, inspiring, incredible goal to grow towards.