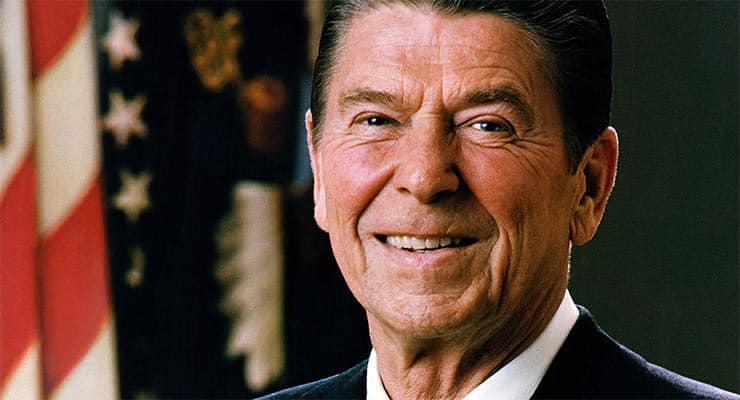 The recent passing of Reagan astrologer Joan Quigley is a reminder that Ronald and Nancy Reagan were secretly super weird New Agers. Here’s three occult secrets that have come out from Reagan’s time in office.

Reagan astrologer Joan Quigley passed away last week in San Francisco, California at the age of 87.

Nancy Reagan regularly sought Miss Quigley for consultation on matters extending well beyond the president’s schedule into diplomacy and Cold War politics, and Salon ran a piece by Mitch Horowitz back in January that detailed Ronald Reagan’s personal interest in the writings of famed occult teacher Manly P. Hall.

In his book One Simple Idea: How Positive Thinking Reshaped Modern Life, Horowitz details how Hall’s teachings informed Reagan’s vision of America. Hall wrote about America’s “secret destiny,” claiming that it had been “planned and founded by secret esoteric orders to spread enlightenment and liberty to the world.” In 1928, Hall published The Secret Teachings of All Ages, a thorough codex of esoteric philosophies of antiquity that remains an unparalleled resource for ancient symbols and mystical thought.

After publishing his “Great Book,” Hall spent the rest of his life lecturing and writing within the walls of his Egypto-art deco campus, the Philosophical Research Society, in L.A.’s Griffith Park neighborhood. Hall called the place a “mystery school” in the mold of Pythagoras’s ancient academy.

It was there in 1944 that the occult thinker produced a short work, one little known beyond his immediate circle. This book, “The Secret Destiny of America,” evidently caught the eye of Reagan, then a middling movie actor gravitating toward politics.

“Reagan cannot easily be classified—he had broad general interests in American metaphysics, which seem to have mirrored those of his neighbors and social circle in California,” Horowitz told Ultraculture. “His echoing of the work of Manly P. Hall indicates that his interest went beyond newspaper astrology but I wouldn’t depict the occult as the ‘power behind the throne’; rather, it reflected the values and mores that surrounded the Reagans in Hollywood.”

The influence that Hall’s teachings left on Reagan have largely shaped the American presidency and popular imagination of the nation for the last 30 years. If you add Nancy Reagan employing the services of a professional astrologer—and the Reagans’ encounter with a UFO in the 1950s—then Reagan’s America starts looking a little stranger than initially thought.

Below is a list of Reagan’s occult fascinations, and the lasting influence they’ve had on American politics.

Reagan’s articulation of a grand vision for America as a nation divinely ordained to lead the world into a better tomorrow continues to resonate today. He announced his candidacy in 1979 by declaring: “To me our country is a living, breathing presence, unimpressed by what others say is impossible… If there is one thing we are sure of it is… that nothing is impossible, and that man is capable of improving his circumstances beyond what we are told is fact.”

“[Reagan’s] interest in certain mystical tendencies in American life helped inform his manner of viewing the world,” Horowitz told Ultraculture. “For example, he echoed the mind-power metaphysics of popular figures such as the Rev. Norman Vincent Peale, to whom he awarded a Presidential Medal of Freedom. At his core, Reagan believed in the limitless possibilities of the individual. By turns this could be inspiring but, from a policy perspective, could also be frustrating and limiting.”

In One Simple Idea, Horowitz writes:

After Reagan, virtually every major campaign address included paeans to better tomorrows, from Bill Clinton’s invocation of “a place called Hope” (and his use of Fleetwood Mac’s “Don’t Stop Thinking About Tomorrow”), to Barack Obama’s “Yes, we can.” In his 2011 State of the Union address, Obama echoed one of Reagan’s signature lines when he declared: “This is a country where anything is possible.” The one recent president who complained that he couldn’t master “the vision thing,” George H. W. Bush, was not returned to office.

2. Reagan Had an Encounter With a UFO

During the 1950s, on their way to a dinner party, Ronald and Nancy Reagan had an encounter with a UFO. According to Horowitz, family friend Lucille Ball told a story of one night when she was to meet the Reagans at a dinner party at the home of actor William Holden. They showed up over an hour late with thrilling news. Horowitz writes:

They came in “all out of breath and so excited” and proceeded to tell shocked friends about witnessing a UFO. As president, Reagan more than once assured Soviet premier Mikhail Gorbachev that an interstellar threat would unite U.S. and Soviet societies. Gorbachev honestly seemed perplexed as to whether Reagan was kidding, but ultimately decided he was not.

As mentioned above, Nancy secretly consulted astrologer Joan Quigley regularly throughout the 1980s. It was a minor scandal when President Reagan’s former chief of staff Donald T. Regan revealed what he called the administration’s “most closely guarded secret.”

“Virtually every major move and decision the Reagans made during my time as White House chief of staff was cleared in advance with a woman in San Francisco who drew up horoscopes to make certain that the planets were in a favorable alignment for the enterprise,” Donald Regan wrote in his 1988 memoir, For the Record: From Wall Street to Washington.

Miss Quigley revealed her counsel was sought on some of the most important decisions in the Cold War. From her obituary in the New York Times:

In an interview with “CBS Evening News” in 1989, after Reagan left office, Miss Quigley said that after reading the horoscope of the Soviet leader Mikhail S. Gorbachev, she concluded that he was intelligent and open to new ideas and persuaded Mrs. Reagan to press her husband to abandon his view of the Soviet Union as an “evil empire.” Arms control treaties followed.

Nancy Regan downplayed Miss Quigley’s influence in her 1989 book My Turn: The Memoirs of Nancy Reagan. Miss Quigley fired back with a memoir titled What Does Joan Say?, a question she claims the former president habitually asked Mrs. Reagan.

So what did Joan say about Iran-Contra or financing and arming the Taliban?

Miss Quigley passed away in San Francisco on October 23, at the age of 87.