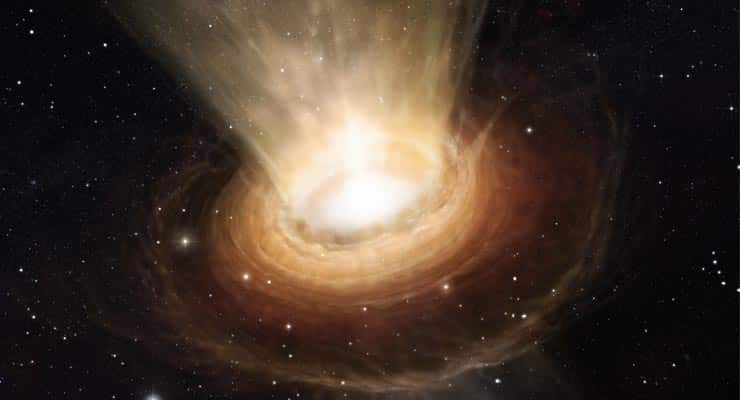 New research suggests that contrary to the Big Bang theory, our universe was actually formed in the event horizon of a black hole left from a collapsed four-dimensional star

A team of researchers at the Three Perimeter Institute might have a solution to the mystery of what came before the Big Bang: A black hole.

Their solution is perplexing, and it has physicists asking if it is grounded in sound mathematics and if it is testable.

The team consists of Perimeter Institute Associate Faculty member Niayesh Afshordi, Affiliate Faculty member and University of Waterloo professor Robert Mann, and Ph. D. student Razieh Pourhasan. They argue that what we perceive as the Big Bang could actually be a three-dimensional mirage of a collapsing star in a universe profoundly different than our own.

“Cosmology’s greatest challenge is understanding the big bang itself,” writes the team.

Conventional understanding of the big bang holds that it began with a singularity—that is, an unfathomably hot and dense phenomenon of spacetime wherein the standard laws of physics totally break down. Singularities are very strange, and our understanding of them is limited to say the least.

“For all physicists know, dragons could have come flying out of the singularity,” Afshordi said in an interview with Nature.

As the authors see it, the big bang hypothesis has our relatively comprehensible, uniform and predictable universe arising from the physics-annihilating maelstrom of a singularity—which, it seems, is highly unlikely.

Perhaps something else happened. What if our universe was never singular in the first place?

In the team’s proposed scenario, our universe was never inside the singularity. Rather, it came into being outside of an event horizon, protected from the singularity. It originated and remains just one feature in the imploded ruins of a four-dimensional star.

RELATED: Fifth World Problems: How to Use Reddit to Find Alternate Dimensions

While this idea may sound “absurd,” the researchers emphasize that it is grounded firmly in the best modern mathematics that describe space and time. Specifically, they used holographic tools to make a model that “turn[ed] the big bang into a cosmic mirage.” This model wound up addressing long-standing cosmological puzzle and, most crucial, produce testable predictions.

They draw a parallel to Plato’s allegory of the cave, in which prisoners spend their lives seeing only the flickering of shadows cast by fire against the cavern wall and believe this shadowplay to be the ultimate reality.

“Their shackles have prevented them from perceiving the true world, a realm with one additional dimension,” they write. “Plato’s prisoners didn’t understand the powers behind the sun, just as we don’t understand the four-dimensional bulk universe. But at least they knew where to look for answers.”