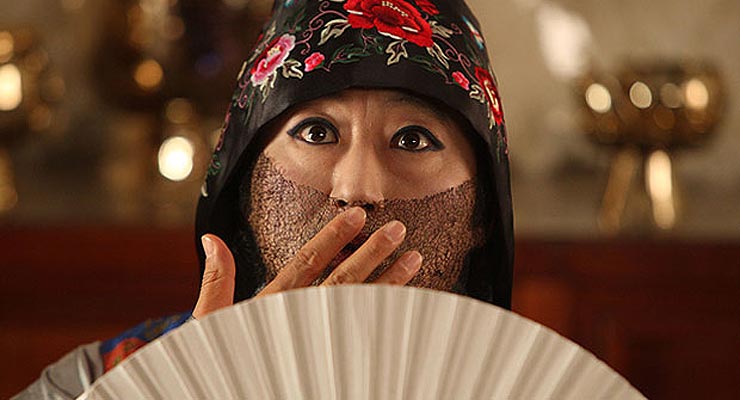 ‘Man on the Edge’, a Korean film about modern shamanism, shows what happens when ‘a mobster on a roll is possessed by spirit’

“Man on the Edge,” originally titled 박수건달, which translates literally into “Shaman Burn,” is a comedy about a Korean gangster who hears the call to shamanism and is pulled into a world of insane supernatural hijinks.

Gwang-Ho (Park Shin-Yang) is the trusted right hand man for a powerful crime boss. His boss trusts Gwang-Ho and he is loved by his men.

One night, his rival in the crime group Tae-Joo (Kim Jung-Tae) attempts to take him out with a knife. As Tae-Joo lunges forward with the long blade knife, Gwang-Ho turns around and grabs the approaching knife blade his hand.

Because of this, his fate line on his palm is changed.

Gwang-Ho has a nightmare that he is being killed and he wakes up due to his cellphone ringing. It turns out Gwang-Ho has slept for 3 nights straight.

Gwang-Ho is informed by his underling that Tae-Joo is planning something suspicious. While driving, Gwang-Ho notices a van that is following him.

Gwang-Ho is able to escape from his car and run down an alleyway. Suddenly, a newspaper blows on to his leg. The newspaper has a large ad for a fortune teller named Myung (Uhm Ji-Won).

As Gwang-Ho looks for an escape route, the newspaper keeps following him.

Soon, Gwang-Ho begins a double life as a crime boss and a fortune teller. Meanwhile, his enemies attempt to reveal his double life.

RELATED: 5 Trickster Gods That Caused Total Chaos (and Got Away With It!)

Like shamans throughout the world, traditional Korean shamanic practitioners—referred to as mudang or baksu in Korea—are able to enter trance states and commune with otherworldly beings in order to provide physical and spiritual healing.

(The trailer above appears to show our hero entering trance states by drinking Red Bull syrup and then chatting with ghosts, fish and a Shiba Inu, which is apparently the modern version.)