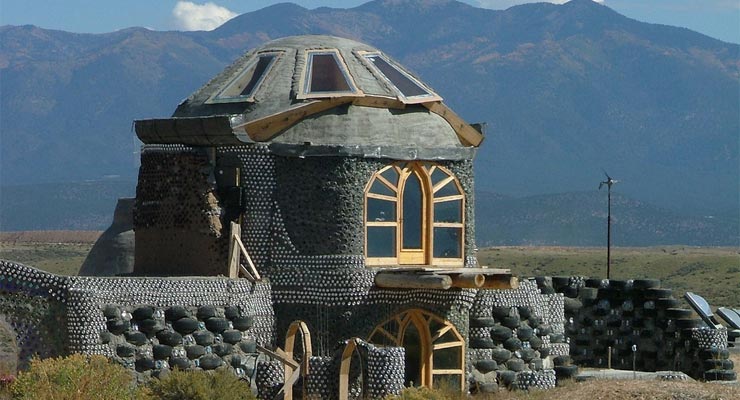 The Earthship sustainable home is an affordable solution to unsustainable housing practices. Here’s everything you need to know to start going off the grid for real

The Earthship is an incredible sustainable, eco-friendly home that people are constantly talking about online and in alternative circles.

But the trend is hardly new. Touted as an off-the-grid home “that will take care of you, while still being sustainable, affordable, strong and meeting your local building codes” on the Earthship Biotecture website, the original concept for the structure developed in the 1970s. It was born out of the head of Michael Reynolds, an iconoclastic counterculture type who moved from Cleveland to the Taos mesa in New Mexico in the late 70s. Reynolds began experimenting with the idea of recycling as an approach to architecture, using empty beer cans as bricks to build a shelter. He describes a time when he was living off the land in a primitive can hut, eating grasshoppers and generating his own electricity, literally without a pot to piss in (he used a bucket, instead).

Reynolds, however, had a vision of affordable ecologically sustainable off-the-grid housing available for everyone. He knew that in order for the idea to catch on, a certain degree of sophistication would have to be adopted.

RELATED: You Can Now Buy Ayahuasca on Amazon.com!

Over the last 40 years, his project has transformed into the company Earthship Biotecture. They offer practical designs starting at $7,000 to more luxurious ones at $70,000 and up. They also offer an array of e-books, events, seminars, and internships to help you design your own Earthship.

Below is a list of the basic facts that you need to know about Earthships.

The cornerstone of the Earthship is the (mostly) recycled materials used for its construction. The structure is built out of used tires filled with dirt, and the walls are then created by placing plastic and glass bottles in concrete so as to conserve on building materials.

With a roof outfitted with solar panels and optional wind turbines, the Earthship is provided with all the power it needs. Continuing advances in Graphene and 3D printing technology should only serve to make it even easier and affordable to power an Earthship.

The Earthship has been brilliantly engineered to sustain comfortable temperatures all year long. In freezing cold or blistering hot climates, the Earthship constantly remains around 70 degrees Fahrenheit.

The reason for this is the result of solar heat being absorbed and stored by the thermal mass (tires filled with dirt) which comprise the Earthship’s structure. The thermal mass releases or absorbs heat while the interior cools down or heats up.

The large greenhouse windows at the front of the house are strategically placed facing south to allow the sun to heat up the thermal mass in the daytime.

Earthships are outfitted with one or more greenhouses that grow crops all year, regardless of the climate. One could feasibly feed themselves and their family with the plants growing inside the greenhouse of their Earthship. There’s also the option of building a fish pond and/or chicken coop for a constant source of meat and eggs.

Even the most arid and dry climates provide enough water for daily use through the Earthship’s rain-harvesting system. The entire roof funnels rain water into a cistern, which then pumps it into sinks and showers, producing what is known as grey water. This grey water is then pumped into the greenhouse to water the edible plants, after which it is pumped back into the bathrooms to be used in the toilets. After being flushed from the toilets, the black water is pumped to the exterior garden to water the non-edible plants.

Below, check out an introduction to Earthships.