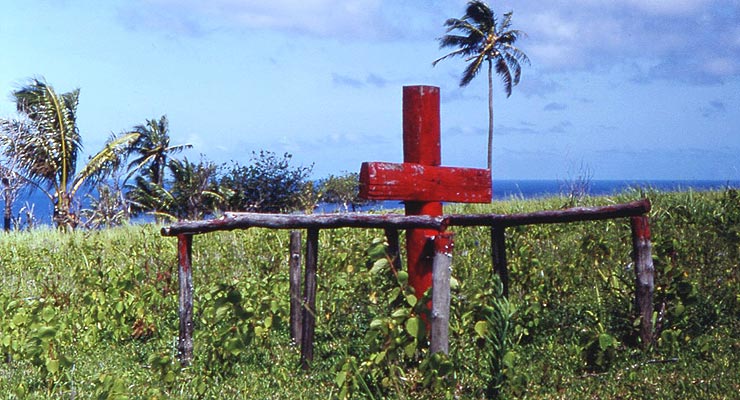 The video below shows some of the rites and rituals of the Melanesian cargo cult a movement that started across the South Pacific, primarily during World War II.

After years of WWII occupying forces’ presence on the islands, bringing the indigenous people Coca Cola, wild music, endless food, soap and clothing, the Melanesians became intoxicated by the industrial heart of civilized culture. The end of the war and the abrupt departure of these soldiers left them with a deep, restless longing for what the planes had brought. In a flash, those planes became the chariots of Heaven, and the men aboard became as gods.

Several factions of the cargo cults split off—one cargo cult on Tanna Island in Vanuatu worships the Jesus-like figure “John Frum,” whose name likely originated with the phrase “I am John from (Cincinnati),” and became an identifier. Another cargo cult on Tanna worships Tom Navy, clearly originating from a Naval officer who “blessed” that people with his gifts of Industry. Yet another worships Prince Phillip, Duke of Edinburgh.

The bizarre spirituality of the Cargo Cult centers on the new age of wealth and blessings triggered by the delivery of “cargo” from the heavens. The “pigs from heaven” that will deliver this sacred cargo are constantly invoked by cargo cult practitioners through makeshift “runways,” “control towers” and “military formations” based on what the earliest believers observed of the Americans who landed their planes on the Melanesian islands. Priests wave makeshift traffic cones in the hopes of bringing down magical flying metal beasts onto the dirt and plant landing strips, while control towers with fake radios are full of more priests attempting to “hail” the gods on the Marconi. Worshippers gather and lay at the runway by fake planes, some wearing fake uniforms, attempting to call the divine to them.

According to their faith, when the cargo planes someday land again, summoned by these touching imitations, the world as we know it will end, and the Melanesians believe that all the wealth of the “gods” will be given to them as a token of appreciation.

In modern times Christianity, brought by missionaries, has either modified or obliterated the majority of these cults—but seven still remain, waiting for the foreigners to bring their Top 40 hits and soft towels back to them. No other movement has quite embodied the concept of worshiping industrial power quite like these do.

To this day, it’s not uncommon to see the Melanesian people sitting on their landing strips, “radioing” into the great beyond on tin-bamboo contraptions, calling repeatedly for the Flying Pigs to bring their Rapture cargo to them at last—a reward for their industrial-strength devotion.

For More: Cargo Cult: Strange Stories of Desire from Melanesia and Beyond