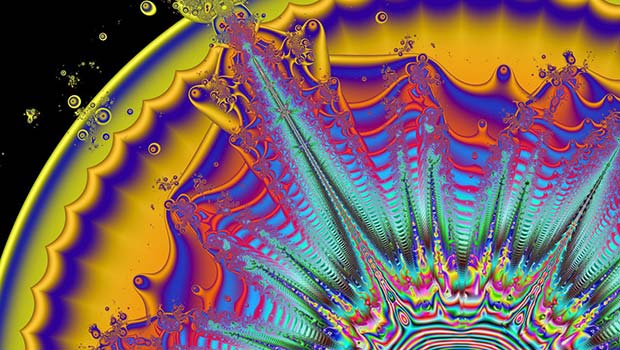 The video below, dubbed “DMTrmx,” in an absolutely spectacular computer visualization of a DMT trip created by Martin Stebbing—it combines immense animation with audio of Terence McKenna describing the effects of the drug.

DMT (Dimethyltryptamine) is perhaps the most potent psychedelic drug in the world; its effects are overwhelming but last only five to ten minutes before returning the user to normality. Users often report entering bizarre, alien fractal landscapes (such as the one simulated above) and having conversations with discarnate entities. It’s also the active ingredient in ayahuasca, as well as being present in small amounts in psilocybin mushrooms.

The DMT experience completely demolishes waking reality. It smashes the user’s individual sense of self—even of having a body or mind—blasting them into a neon-cyberpunk alternate dimension where they meet entities which may or may not be benevolent. It is extreme behavior, even for psychedelic users. It’s one of the most intense compounds on the planet, and likely the most extreme thing you can do to your mind and sense of reality.

It’s like this. And I know this is a cliché, but it’s kind of true: if you’re “supposed” to have a DMT trip, it’ll show up. One of your friends will suddenly come into it, or some dodgy drug hobbit will pop up out of nowhere and offer it. It’s one of those “when the student is ready, the teacher appears” things.

Even then, it’s something to do some serious research and contemplation about before taking the plunge.

Terence McKenna (1946-2000), the man narrating the above video, was a psychedelics researcher who largely focused on naturally occurring plant psychedelics. His work is the first place most people got hyped on the whole 2012 thing before it was largely taken out of context. He wrote some absolutely crucial, must-read books, like Food of the Gods and True Hallucinations.

(Recently, rumors have been circulating on the Internet that Terence was a deep background agent for the CIA and FBI, and that he had ceased taking psychedelics in the early 1980s even though he continued to proselytize their use. A lot of this relies on things McKenna said which might have been taken out of context; but then again, if you know the history of the CIA’s 1980s MK-ULTRA program, you know it’s within the realm of possibility. After all, McKenna’s contemporary John Lilly worked with the US intelligence community in the early days.)

The video is an excellent introduction to an incredibly interesting substance that has been inspiring psychonauts for decades, and showing humanity that we know almost nothing about the nature of consciousness.