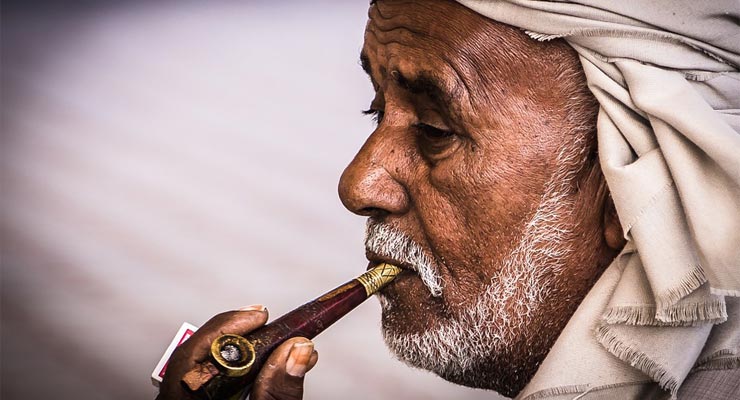 It’s a startling sight: a well-kandured gentleman pulls out a one-hitter dokha pipe on the balcony of a posh restaurant overlooking a canal lit with periwinkle LEDs. He takes a hit and slowly turns his gaze skyward. The smoke doesn’t smell much like tobacco to me. I thought that was illegal here. The UAE has very strict drug laws, and even electronic cigarettes are banned across the Arabic Gulf.

But dokha is a cultural institution, as important to many men as their coffee and their four-wheel drive trucks. Dokha is a light green, dry version of tobacco that usually comes in the form of crushed leaves. It looks like catnip. It is smoked in a small pipe called a midwakh, and is common across the Middle East. Such is demand in the UAE, that Oman has just designated new agricultural lands for its production.

Dokha is strong. The word dokha means “dizzy” in Arabic—and it doesn’t take much of it to wallop you righteously. The effect can be very intense, but also immediately calming. But, since it’s tobacco, it is completely legal. There are even companies in the U.S. and U.K. beginning to import and sell the stuff. Apparently interest is picking up in the West due to soldiers discovering the habit in one of our wars over here, and returning home to share it with friends.

But smoke is smoke, and despite a few tertiary benefits that come from smoking, dokha is no more good for your health than a Marlboro… though the effect is markedly different. It seems to me that there’s something more to dokha than Nicotiana, and sometimes you’ll find descriptions of it such as “Iranian tobacco with a mix of herbs.” Obviously it’s the “mix of herbs” that may be suspect, but information on any non-tobacco ingredients is not easy to find.