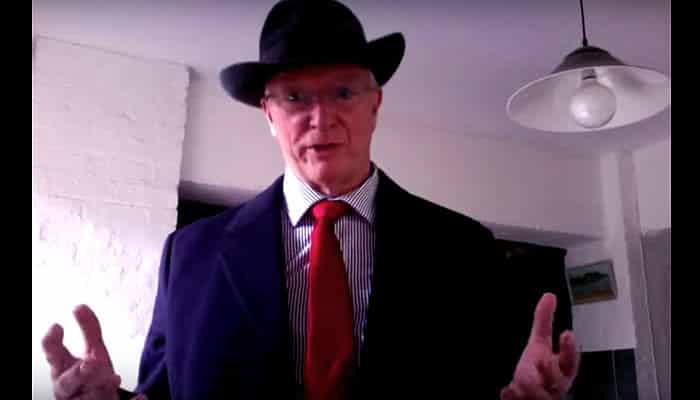 Pre-eminent chaos magician Lionel Snell, a.k.a. Ramsey Dukes, has a new YouTube channel in which he explains the secrets of magick… and is very, very charming and funny.

As early writer (in the 1980s!) on the Gnostic potential of virtual reality, it’s likely that Lionel Snell was a major influence on Grant Morrison (his theories are echoed in Morrison’s Sebastian O

) as well as on The Matrix. Duke’s theory on how magick fits in to the cultural landscape—that it represents a fourth cultural stream, separate from religion, science and art—is very practically useful, and a lot more practically useful than the hierarchical complexity of, say, Spiral Dynamics.

To my great excitement, Lionel Snell / Ramsey Dukes (now in his 70s) has started a YouTube channel, and has been recording short vignettes on magick from the wise perspective of an elder who’s REALLY done it.

(By way of illustrating his approach to magick, one of my favorite Dukes quips is his fictional conceit of starting an “OTTO”—”Over The Top Order.” This was in reaction to the chaos magick idea that you don’t have to do magick in a set way, so you might as well simplify it and, say, use a paper cup instead of a ceremonial chalice for your magic cup. If you don’t have do do it a set way, asked Ramsey, than why not go Over The Top, and use the silver-engraved skull of a Tibetan Lama personally raided from an ancient monastery for your cup? And so on..)

Snell / Ramsey Dukes has a very basic wit, charm and sanity that is sorely needed in public as magick grows in popularity, and I’m glad that he’s doing these videos. I wish he were on CNN debating Richard Dawkins—actually that he would take his rightful place as our culture’s Anti-Dawkins!

Check his videos; you’ll immediately be impressed by his warm demeanor. You can watch the rest of his videos, and subscribe to his channel, here.

For the best of Ramsey Dukes—and the best of magick period—make sure to check out his classic books on chaos magick (including one with possibly the best title for an occult book ever, Blast Your Way to Megabuck$ With My SECRET Sex-Power Formula! And Other Reflections on the Spiritual Path) at his Amazon page.