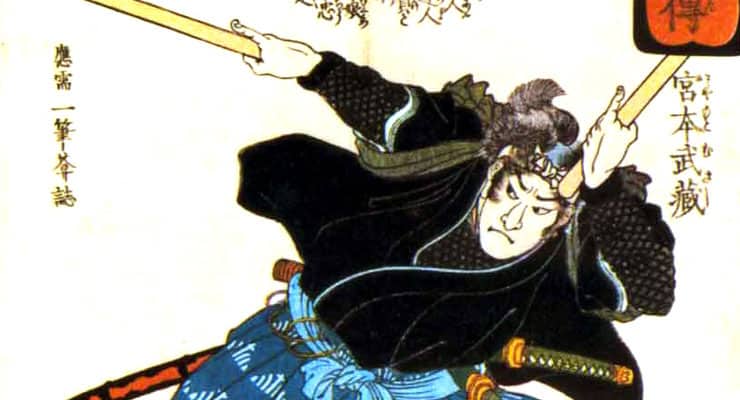 Miyamoto Musashi was an expert swordsman and ronin in 17th century Japan, during the early Edo period.

Legends of Miyamoto Musashi embody everything that the West glorifies in the the samurai: great skill matched with fine cunning and unrivaled excellence. He was only 13 years old when he won his first duel—against the notorious samurai Arima Kihei. The young Musashi was said to have taken his much older and more skilled opponent off guard by charging him with a wooden club and beating him to death.

As a man, Musashi challenged the great swordsman Yoshioka Seijuro, head of the Yoshioka School of Swordsmanship (where Musashi was believed to have trained as a young man), to a duel. Being aware of the intense concentration with which the Yoshioka school trained their students, Musashi arrived three hours late. His lack of punctuality so enraged his opponent that Yoshioka charged Musashi in a fit of rage and fell upon Musashi’s sword. Musashi later repeated this technique to success when he was challenged by Yoshioka’s brother to a revenge duel. When the entire Yoshioka school demanded to battle Miyamoto Musashi, he arrived early and ambushed his opponents. According to legend, Musashi hacked his way through two-thirds of his opponents before he defeated the young heir to the Yoshioka school, without ever taking a scratch.

The Way of the Peaceful Warrior

But Miyamoto Musashi was not just a violent warrior. Raised as a Buddhist by his uncle, Musashi followed a deeply spiritual and cultivated path. He founded his own school of swordsmanship, the Niten Ichi-ryū school—which translates to “the school of the strategy of two heavens as one,” a reference to Musashi’s trademark technique of fighting with two swords. His Book of Five Rings is a classic in the philosophy and practice of martial arts, rivaled in popularity in the West only by Sun Tzu’s The Art of War. The Book of Five Rings is a treatise on the “Way of strategy” broken into five books: Earth, Water, Fire, Wind and Emptiness.

The “Way of Strategy”of Miyamoto Musashi is equivalent to the Chinese “Tao.” It’s taken to mean the whole life of the warrior and his devotion to the sword. “Generally speaking,” Musashi wrote, “the Way of the warrior is the resolute acceptance of death.”

The conclusion of the Book of Earth in The Book of Five Rings contains one of its most famous passages: Musashi’s Nine Precepts for conduct and success. They contain universal wisdom not limited to swordsmanship, and can be applied to anything that anyone does in life.

You are your own warrior following your own path. Let Miyamoto Musashi’s Nine Precepts be your map.

1. Do no think dishonestly

Think honestly and truthfully. Do not harbor sinister designs.

2. The Way is in training

One must always continue to train.

3. Become acquainted with every art

By cultivating a wide range of interest in the “ten skills” and the “ten arts,” one can definitely find themselves following the Way and develop oneself.

4. Know the Way of all professions

Be knowledgeable in a variety of occupations, and learn the thinking of people who work in them.

5. Know the difference between loss and gain in worldly matters

Knowing when to accept loss and how to carry gain allows for sure step on the Way.

6. Develop intuitive judgement and understanding for everything

Nurture the ability to perceive the truth in all matters. It is important to build up an intuitive judgment and understand true values.

7. Perceive those things which cannot be seen

Be aware of those things which cannot be easily seen with the eye. Develop intuitive judgment and a mind that freely controls one’s body.

8. Pay attention even to trifles

Do not be negligent, but pay attention even to the smallest details. Keep them in mind all the time, so as to avoid unexpected failure.

9. Do nothing which is of no use

“When you embark on something,” Musashi wrote, “before you start, fix your intention on the Four Oaths and put selfishness behind you. Then you cannot fail.”

“The Four Oaths: Never be late with respect to the Way of the warrior. Be useful to the lord. Be respectful to your parents. Get beyond love and grief: exist for the good of man.”

To further learn the superior way of Eastern mysticism, check out Ultraculture’s class on Mastering the I Ching.