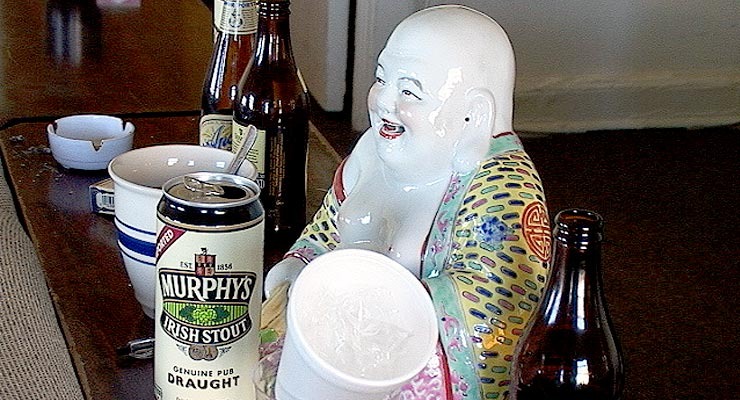 A Reddit user performed an interesting experiment: trying to meditate while drunk after consuming copious amounts of alcohol, with interesting results!

A Reddit user recently posted results of an interesting experiment: attempting to practice mindfulness meditation while drunk. Meditating while under the influence of alcohol is a bold move. While it would obviously be a bad idea for a beginning meditator, would an experienced meditator be able to meditate while drunk, or even benefit from it?

Tonight I’m performing an experiment with the hope of bringing awareness to what happens to me when I drink. First I will meditate briefly to establish a baseline, and sip by sip, be mindful of how I change.

Baseline: I find it harder to concentrate than normal. There’s noticeable tension between my brows.

” I wonder what would happen if I killed the bottle.”

” Maybe I should smoke some weed too and see what happens!”

Beyond this, the mind is overall quieter. Gave up on keeping my eyes closed. Reality is sort of dreamlike, images and sounds of the mind are louder.

5th: Feeling it. Easier to close my eyes now. Mind is chaotic but nothing persists for long, like flashes in the periphery, almost noise. Inner voice is restless. It’s been about 45 minutes now.

6th: I can tell my body doesn’t like it. I don’t feel well, which is abnormal for my tolerance level.

Alcohol is the opposite of mindfulness. It urges you to jump and surf its stream, and if you don’t, it punishes you with nausea. It promotes lack of awareness, and rewards you with the illusion of a quiet mind, but really, it’s blanket apathy.

After deciding to meditate while drunk, experimenter pours a couple more shots, and eventually puts alcohol to serious questioning.

In the comments, the experimenter revealed that they were initially inspired by an article that ran on Elephant Journal titled “Mindful Drinking,” particularly a passage reading:

McKeever recalled the lessons Trungpa Rinpoche offered him decades ago: “He had us take three sips and then look at the effect on our mind. ‘Have you relaxed?’ he’d ask. ‘Is your mind extending into space? If so, stop there.'” The goal of drinking mindfully is to bring full awareness to every sip.

The Tibetan teacher Chögyam Trungpa Rinpoche was a notoriously heavy drinker, and as the above passage indicates, frequently incorporated alcohol into his teachings and attempted to meditate while drunk. More from the Elephant Journal article:

Here’s the basic idea: once a meditator has developed basic Buddhist discipline (known as Hinayana training) and adopted the intention to dedicate his or her life to benefit others (the Mahayana view) the practitioner is ready to incorporate Vajrayana teachings, in which the simple prohibitions outlined in traditional Buddhist sutras are re-evaluated. When a meditator reaches this point, which usually takes a number of years, a dangerous substance like alcohol is viewed—within a context of strong discipline and clear intention—not as a conventional escape, but instead as a tool for loosening the subtle clinging of ego.

“Imagine you are enjoying a picnic in a beautiful spot with your lover,” McKeever told me. “You want for nothing in this situation.” If you choose to drink at this moment, theoretically, you have no reason to overdo it. You’ll drink just enough to relax, to appreciate your situation and, as McKeever puts it, “to help your ego go to sleep.”

That is why for centuries, in the Kagyü lineage monasteries scattered across the high plains of Tibet, monks incorporated alcohol into their esoteric Vajrayana practices. When one of those Vajrayana lamas, Chögyam Trungpa Rinpoche, fled Tibet during the Chinese invasion of the country, he brought his teachings—including those on the use of alcohol—to the West.

(Below, check out a great Dharma talk by Trungpa.)

So, Is it Really a Good Idea to Meditate While Drunk?

There’s only one way to find out, of course. But before trying such a heroic (or maybe foolish) feat, you should probably get really good at meditation first.

Luckily, we have you covered. Our Hardcore Meditation course will give you everything you need to know to absolutely master meditation, and master your consciousness, so that nothing can faze you—not life, and certainly not a few shots of Bushmill’s. Meditation can improve every single area of your life. It steadily develops your mind and calms your emotions, and ultimately allows you to transcend your ego and experience pure ecstasy. Meditation—or, as it is properly and classically known, raja yoga—is a step-by-step science that predates civilization, and can take us to the stars. It’s the most critically important skill that anybody can learn… check out the class!