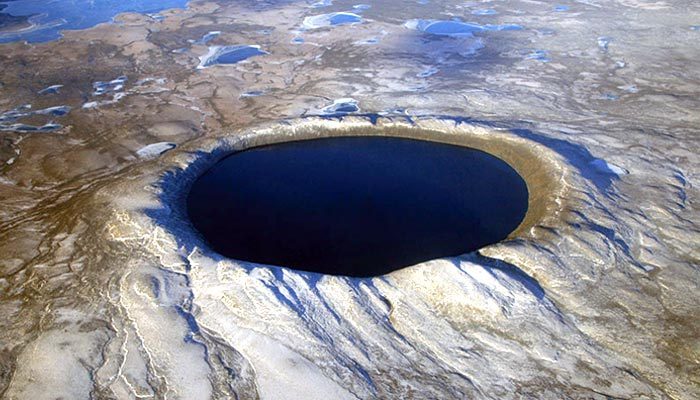 If you thought it was a trip to see the Earth from space, then wait until you get a load of this: A team of scientists from Harvard University believe that have found evidence that an ancient Earth exists inside our planet. The team believes that a previously unexplained isotopic ratio from deep within the Earth might be a signal from material from before our world collided with another planet-sized body, which led to the creation of the Moon. This might be an echo of an ancient Earth that existed 4.5 billion years ago, prior to the proposed collision.

The current favored theory says that the Moon was formed 4.5 billion years ago when the Earth collided with a mass the size of Mars, dubbed “Theia.” This theory states that the heat generated by the collision would have melted the whole planet before some of the debris spun off to create the Moon.

But now, the team at Harvard, led by Associate Professor Sujoy Mukhopadhyay, believe that they’ve found evidence to support that only part of the Earth melted, and that an ancient part still exists within the planet’s mantle.

According to Professor Mukhopadhyay: “The energy released by the impact between the Earth and Theia would have been huge, certainly enough to melt the whole planet. But we believe that the impact energy was not evenly distributed throughout the ancient Earth. This means that a major part of the impacted hemisphere would probably have been completely vaporized, but the opposite hemisphere would have been partly shielded, and would not have undergone complete melting.”

The team analyzed the ratios of noble gas isotopes from deep within the Earth’s mantle and compared the results to isotope ratios closer to the surface. They found that 3He to 22Ne ratio from the shallow mantle is significantly higher than the equivalent ratio deep within the mantle.

Professor Mukhopadhyay remarked: “This implies that the last giant impact did not completely mix the mantle and there was not a whole mantle magma ocean.”

Further evidence comes from analysis of the 129-Xenon to 120-Xenon ratio. Material brought to the surface from the deep mantle has a lower ratio than what’s normally found near the surface. Because 129-Xenon is produced by the radioactive decay of 129-Iodine, the isotopes place the formation age of the ancient section of mantle to within the first 100 million years of Earth’s history.

“The geochemistry indicates that there are differences between the noble gas isotope ratios in different parts of the the planet, and these need to be explained. The idea that a very disruptive collision of the Earth with another planet-sized body, the biggest event in our planet’s geological history, did not completely melt and homogenize the Earth challenges some of our notions on planet formation and the energetics of giant impacts. If the theory is proven correct, then we may be seeing echoes of the ancient Earth, from a time before the collision,” said Professor Mukhopadhyay.

Professor Richard Carlson of the Carnegie Institution Department of Terrestrial Magnetism stated: “This exciting result is adding to the observational evidence that important aspects of Earth’s composition were established during the violent birth of the planet and is providing a new look at the physical processes by which this can occur.”

The findings of the team at Harvard coincide with a German team’s findings supporting the theory that the Moon was formed 4.5 billion years ago after a catastrophic collision with a planet-sized mass.

(Pictured above: An ancient impact crater, via Wikimedia Commons.)

Update 1: There May Be ‘Oceans’ of Water Under the Earth’s Surface 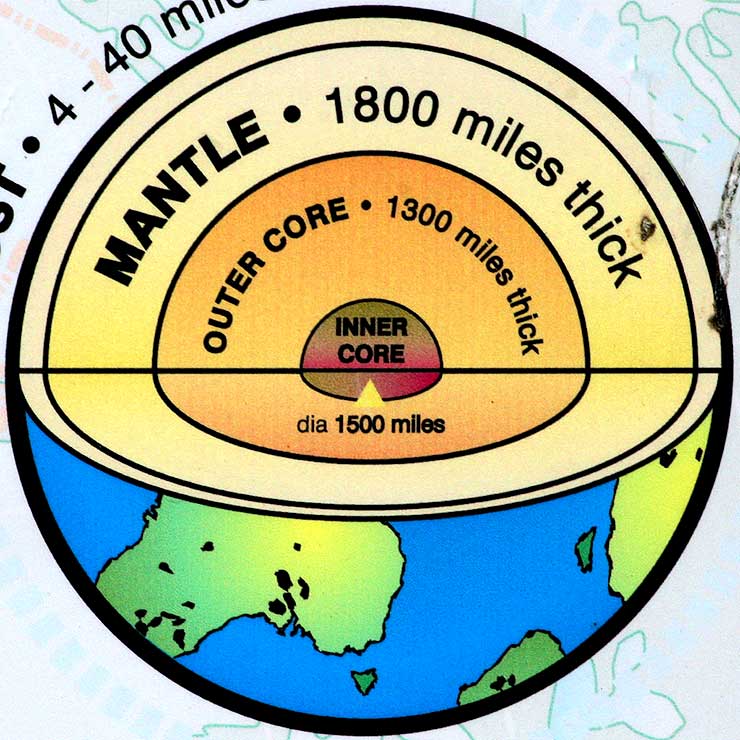 We might be seeing the early stages of a geological paradigm shift: researchers at Northwestern University and University of New Mexico report evidence that there may be oceans’ worth of water deep beneath North America—with potentially multiple times the amount of water as in Earth’s oceans.

Due to the abundance of liquid water on the Earth’s surface, which makes the planet habitable, scientists have long wondered how much water cycles between Earth’s surface and interior reservoirs via plate tectonics.

However, the water discovered beneath North America is not liquid. Instead, the ingredients for water are bound up in rock deep within the Earth’s mantle.

Northwestern geophysicist Steve Jacobsen and University of New Mexico seismologist Brandon Schmandt discovered pockets of magma about 400 miles deep beneath the surface. This is a likely sign of the presence of water at these depths. The discovery indicates that plate tectonics can drive water from Earth’s surface to such great depths that it eventually causes partial melting of the rocks deep within the mantle.

These findings will aid science in understanding how it was the Earth was formed, its current composition and inner workings. It will also aid in knowing how much water is trapped in rock mantle.

“Geological processes on the Earth’s surface, such as earthquakes or erupting volcanoes, are an expression of what is going on inside the Earth, out of our sight,” said Jacobsen. “I think we are finally seeing evidence for a whole-Earth water cycle, which may help explain the vast amount of liquid water on the surface of our habitable planet. Scientists have been looking for this missing deep water for decades.”

It has long been speculated by scientists that there is water trapped in a rocky layer of Earth’s mantle at depths between 250 miles and 410 miles, between the lower mantle and upper mantle. Jacobsen and Schmandt are the first to provide direct evidence on a regional scale of potential water in this area of mantle, known as the “transition zone.” The region extends across most of the interior U.S.

Schmandt investigated the structure of deep crust and mantle by using seismic waves caused by earthquakes and Jacobsen used laboratory observations to make predictions about geophysical processes occurring far beyond direct observation. Their findings converged to produce evidence that melting may occur at about 400 miles deep.

“Melting of rock at this depth is remarkable because most melting in the mantle occurs much shallower, in the upper 50 miles,” said Schmandt. “If there is a substantial amount of H2O in the transition zone, then some melting should take place in areas where there is flow into the lower mantle, and that is consistent with what we found.”

If only one percent of the weight of mantle rock in the transition zone is H2O, then it would be equivalent to nearly three times the amount of water in our oceans.

The water, however, is not in the familiar forms of liquid, ice or vapor. Instead, this fourth form is trapped inside the molecular structure of the minerals in mantle rock. The weight of 250 miles of solid rock creates such high pressure that, when coupled with temperatures above 2K degrees Fahrenheit, a water molecule splits to form a hydroxyl radical (OH), which can be bound into a mineral’s crystal structure.

The duo’s findings build on the discovery reported in March in the journal Nature in which a team of researchers discovered a piece of ringwoodite inside a diamond brought up from nearly 400 miles by a volcano in brazil. The piece of ringwoodite—the only sample in existence from within the ancient Earth—contained an alarming amount of water bound in solid form inside the mineral.

The mineral ringwoodite, a sapphire blue color, is a key to the presence of water within the ancient Earth. Jacobsen, who has been synthesizing ringwoodite in his Northwestern lab for years, said, “[It] is like a sponge, soaking up water. There is something very special about the crystal structure of ringwoodite that allows it to attract hydrogen and trap water. This mineral can contain a lot of water under conditions of the deep mantle.”

Jacobsen and Schmandt published their findings in the journal Science earlier this month. 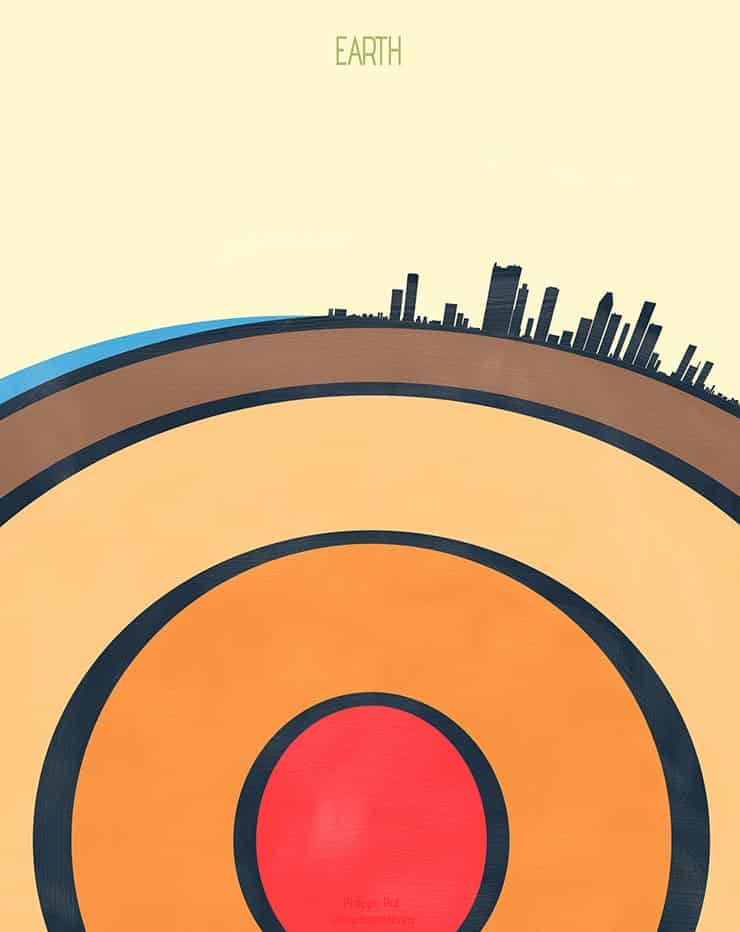 Research teams at the University of Illinois and Nanjing University in China have discovered that the Earth’s inner core actually has another inner core within it.

The inner core is smaller than the moon—but researchers hope that it may tell us about how the ancient Earth formed and the ongoing geological processes affecting the planet. The researchers discovered the inner core by using seismic waves from earthquakes to scan below the ancient Earth’s surface. And while the world’s inner core was once thought to be comprised of solid iron, the team was shocked to find not total solidity but an inner core half the outer core’s diameter. And while the outer core’s iron crystals point north-south, the inner core’s iron crystals point east-west—the inner core’s crystals may also be made up of a different type or phase of crystal, though obviously no data on what exactly is in there is available.

RELATED: Here’s a Awesome Map of the Evolution of World Religions

According the Xiaodong Song, professor of geology at the University of Illinois, “The fact that we have two regions that are distinctly different may tell us something about how the inner core has been evolving. For example, over the history of the Earth, the inner core might have had a very dramatic change in its deformation regime. It might hold the key to how the planet has evolved. We are right in the center—literally, the center of the Earth.”

It’s just looking stranger and stranger down there… suggesting we may not even have begun to understand the inner reaches of our world.