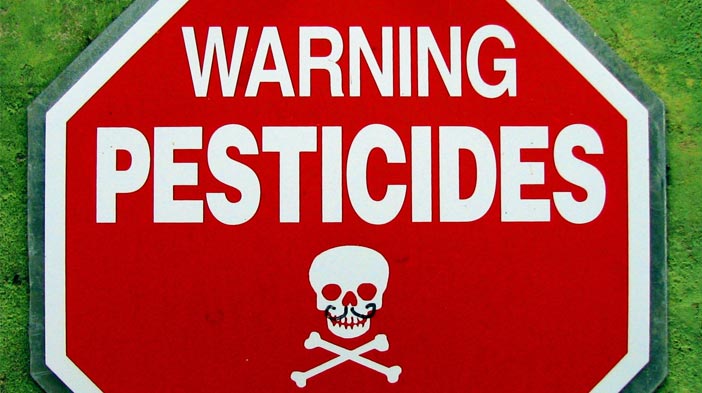 Tyrone Hayes, a scientist at the University of California, Berkeley, was hired by agribusiness giant Syngenta to study the herbicide atrazine, which is used on half the corn crops in the US, as well as Christmas tree farms and golf courses. What Hayes found was exactly what Syngenta didn’t want to hear: in studying atrazine’s effects on frogs, he discovered that the pesticide has a disruptive effect on the endocrine system.

Ready for this? According to Hayes, it apparently interferes with male development, causes males to switch gender to female and develop ovaries and eggs, drops testosterone production, “chemically castrates” male frogs and later leads to development of homosexual behavior as the gender-altered frogs begin to prefer same-sex mating.

Hayes’ research suggests that atrazine has the same effects on humans—however, before a thousand headlines like “Shocker: Corn Makes You Gay” are launched into the blogosphere, I’ll note that while researchers can often switch sexual orientation in animals by altering hormone levels, there aren’t significant differences in hormone levels between gay and straight humans. (In fact, gay men often have higher testosterone levels than straight men, not lower.) Yet I’ll also note that a 2007 study found that testosterone levels have massively dropped in American males since the early twentieth century, for reasons unknown. Chemical and pesticide tampering with the food supply would be an obvious place to begin experimental inquiry.

Also according to Hayes, Syngenta was allegedly so displeased with the results that they began asking him to change or misrepresent data, eventually telling him not to publish his findings. They also hired new scientists to discredit the data, attempted to discredit Hayes and, according to the Berkeley scientist, began stalking him and making threats of violence, including threats of lynching (Hayes is black), sexual violence and even threats of sexual violence against his wife and children. Also according to Hayes, the University of California, Berkeley offered little aid or protection, expressing far more concern about the financial bottom line than any kind of truth or responsibility to its academics.

Another key takeaway is that atrazine induces overproduction of estrogen, potentially leading to breast cancer. Concurrent to its marketing of atrazine, Syngenta (previously known as Novartis) was marketing a treatment for breast cancer that functioned by blocking estrogen through the exact opposite mechanism as atrazine—making money, one might extrapolate, by both inducing and then offering to aid the problem they may have helped create.

Syngenta is a Swiss chemical company in the seeds-and-pesticides business; they reported $14.2 billion in revenue in 2012. Syngenta is a major “competitor” of Monsanto, though Syngenta has largely managed to stay out of the limelight and avoid the massive public outroar that its sister company Monsanto has faced. (The world’s top four biotech companies are Syngenta, Monsanto, Bayer and DuPont.)

We speak with scientist Tyrone Hayes of the University of California, Berkeley, who discovered a widely used herbicide may have harmful effects on the endocrine system. But when he tried to publish the results, the chemical’s manufacturer launched a campaign to discredit his work. Hayes was first hired in 1997 by a company, which later became agribusiness giant Syngenta, to study their product, atrazine, a pesticide that is applied to more than half the corn crops in the United States, and widely used on golf courses and Christmas tree farms. When Hayes found results Syngenta did not expect — that atrazine causes sexual abnormalities in frogs, and could cause the same problems for humans — it refused to allow him to publish his findings. A new article in The New Yorker magazine uses court documents from a class action lawsuit against Syngenta to show how it sought to smear Hayes’ reputation and prevent the U.S. Environmental Protection Agency from banning the profitable chemical, which is already banned by the European Union.

Below, watch a fascinating and disturbing interview with Hayes about his findings and bullying by Syngenta thugs. It’s well worth your time.

(For more info on the mafia tactics and population-poisoning antics of big agribusiness, check the Ultraculture book Monsanto vs. the World: The Monsanto Protection Act, GMOs and Our Genetically Modified Future.)