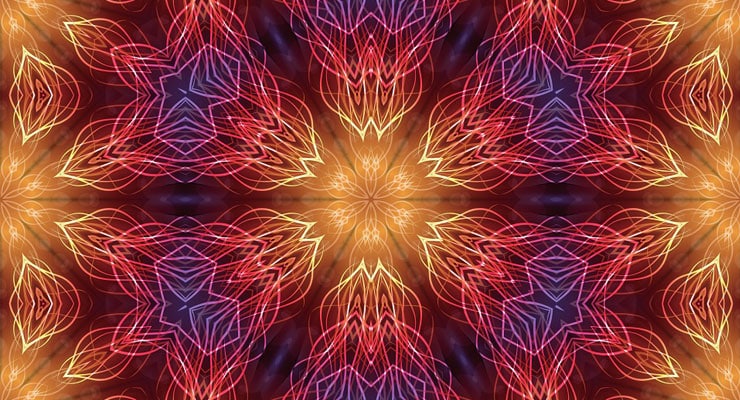 Mathematicians analyze the geometric patterns users of psychedelics see—and come up with equations to model them (!)

Psychedelics like LSD, DMT and, at times, psilocybin, can produce unbelievably complex geometric patterns in the brain of the person using them, a phenomenon that has inspired everything from Francis Crick’s discovery of the structure of DNA while tripping to, well, a couple decades of awful trance album art. Amazing.

+Plus magazine, dedicated to mathematics, just released this breakdown of exactly what’s going on when that happens, including mathematical equations describing the production of geometric hallucinations. It’s a fascinating read:

Think drug-induced hallucinations, and the whirly, spirally, tunnel-vision-like patterns of psychedelic imagery immediately spring to mind. But it’s not just hallucinogenic drugs like LSD, cannabis or mescaline that conjure up these geometric structures. People have reported seeing them in near-death experiences, as a result of disorders like epilepsy and schizophrenia, following sensory deprivation, or even just after applying pressure to the eyeballs. So common are these geometric hallucinations, that in the last century scientists began asking themselves if they couldn’t tell us something fundamental about how our brains are wired up. And it seems that they can.

Geometric hallucinations were first studied systematically in the 1920s by the German-American psychologist Heinrich Klüver. Klüver’s interest in visual perception had led him to experiment with peyote, that cactus made famous by Carlos Castaneda, whose psychoactive ingredient mescaline played an important role in the shamanistic rituals of many central American tribes. Mescaline was well-known for inducing striking visual hallucinations. Popping peyote buttons with his assistant in the laboratory, Klüver noticed the repeating geometric shapes in mescaline-induced hallucinations and classified them into four types, which he called form constants: tunnels and funnels, spirals, lattices including honeycombs and triangles, and cobwebs.

(Read the rest of the article at +Plus.)