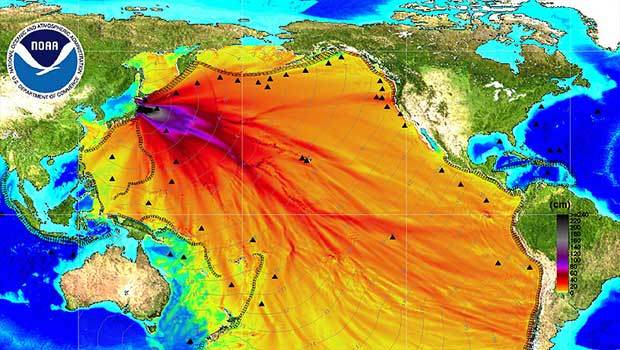 That Fukushima radiation map showing radiation leaking into the Pacific that’s been going around Facebook is BS… so why do people keep sharing it?

You’ve probably seen what appears to be a nightmarish Fukushima radiation map showing radiation flowing out of Japan and stretching towards the west coast of America, coming to irradiate and mutate the entire coast. You may have experienced deep feelings of nausea, discomfort, existential dread or sudden urges to move to Europe.

RELATED: 10 Foods to Naturally Protect Yourself Against Fukushima Radiation

While the Fukushima disaster still poses several very real dangers, that image doesn’t accurately depict any of them. That’s because it isn’t a Fukushima radiation map at all: the map was created by the National Oceanic and Atmospheric Administration to chart wave patterns from the March 2011 Tohoku earthquake, according to Snopes.

OK, So the Fukushima Radiation Map Isn’t Real. But is There Still a Danger?

However, it is true that the radiation from Fukushima will be hitting the west coast of the United States and Canada full-bore for up to thirty years—but radiation levels will still be well under the World Health Organization safety limits.

Over in Japan, though, it’s a different story. According to the Washington Post, the Japanese government is announcing a plan to spend nearly $500 million to combat toxic water leaks around the facility. The funds will be used to pump coolant into key buildings and even create a $320 million wall of ice constructed of permafrost going 30 meters into the ground, right to the bedrock; the wall of ice will force the leaking radioactive water into the ocean instead of contaminating the groundwater around Fukushima, as it is currently doing at the rate of 400 tons a day.

The radiation levels from these leaks have been revealed to be 18 times worse than previously thought, according to the BBC—which is why the Japanese government is frantically scrambling to contain the leaks before they contaminate Japan’s ground water even further.

(The obvious question will be—if they’re 18 times worse, then what does that mean about previous reports that the radiation hitting America would be negligible? Scientific American assesses that question somewhat here, explaining that the major threat is in potential contamination of sea life—an oceanographer told the publication that “The amount of increase is still much smaller today than it was in 2011… I’m not as concerned about the immediate health threat of human exposure, but I am worried about contamination of marine life in the long run.”)

So the verdict? The ongoing Fukushima radiation is a colossal problem, but the alarmist end-of-the-world statements going around on Facebook aren’t based in reality, and aren’t helping. You can just go ahead and ignore that supposed Fukushima radiation map.